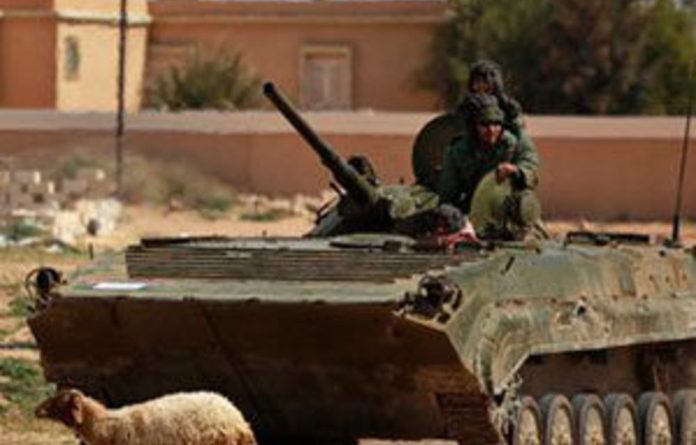 Britain and France spearheaded a drive at the United Nations for a no-fly zone over Libya after Muammar Gaddafi’s warplanes attacked rebels, while aid officials said a million people were in need.

Civilians were surrounded by forces loyal to Gaddafi in two western towns, Misrata and Zawiyah, and in the east aircraft launched strikes on the rebel-held oil terminal town of Ras Lanuf.

Al-Jazeera television said rebels had rejected an offer by Gaddafi to hold a meeting of Parliament to work out a deal under which he would step down.

The United Nations appealed for $160-million to fund an operation over the next three months to prepare shelter, food and medicines.

British Foreign Secretary William Hague said on Monday thaat London was working closely with its partners “on elements of a resolution on a no-fly zone, making clear the need for regional support, a clear trigger for such a resolution and an appropriate legal basis”.

A French source said France was also working with its UN partners on a no-fly zone resolution. Gulf states called for a no-fly zone and an urgent Arab League meeting.

All options
US Defence Secretary Robert Gates, in Afghanistan where foreign forces have struggled for a decade, said action should be taken only with international backing. The White House said all options were on the table, including arming rebels.

Nato secretary general Anders Fogh Rasmussen stressed the need for UN authorisation. “I can’t imagine the international community and the United Nations would stand idly by if Gaddafi and his regime continue to attack their own people,” he said.

Nato has launched 24-hour surveillance of Libya with Awacs reconnaissance aircraft, the US ambassador to Nato said.

US President Barack Obama said he wanted to “send a very clear message to the Libyan people that we will stand with them in the face of unwarranted violence and the continuing suppression of democratic ideals”.

Japan said on Tuesday it had imposed sanctions on Libya, including freezing assets of Gaddafi and several other Libyans, in line with a UN Security Council resolution.

“Based on the UN resolution, the Cabinet agreed that Japan would carry out these measures, for the sake of unity with the international community,” Japanese Finance Minister Yoshihiko Noda told a news conference after a Cabinet meeting.

In the rebel-held city of Misrata, the wounded were being treated on hospital floors because of a catastrophic shortage of medical facilities in the besieged city, a resident said.

Misrata is the biggest city in the west not under the control of Gaddafi, and its stand against a militia commanded by his own son has turned it into a symbol of defiance.

Zawiyah, just 50km from Tripoli, remained in rebel hands despite a push by government forces, according to Sky television.

Crude prices
In the east, warplanes launched air strikes on the rebel-held oil terminal town of Ras Lanuf 600km east of the capital Tripoli, witnesses said. One ripped through a car carrying a family.

Shipping sources said the fighting had closed the Ras Lanuf terminal and the oil port of Brega. Brent crude prices rose above $118 a barrel on Monday before falling back to $115 and US prices pushed to their highest level since September 2008.

Youcef Yousfi, president of the Organisation of Petroleum Exporting Countries, said there were no plans for an extraordinary meeting of group and he believed current high prices were short-term.

The resilience of Gaddafi’s troops and their ability to counter-attack has raised the prospect of prolonged bloodshed.

The Libyan government says it is fighting against al-Qaeda terrorists and maintains its security forces have targeted only armed individuals attacking state institutions and depots.

Al-Jazeera quoted sources from the rebel interim council as saying it rejected Gaddafi’s proposal to quit because it would have been an “honourable” exit for him.

The channel said Gaddafi had wanted guarantees of safety for him and his family and a pledge they not be put on trial.

‘National dialogue’
Jadallah Azous Al-Talhi, a former prime minister, earlier appeared on state television to urge rebels to “give a chance to national dialogue to resolve this crisis”.

Ahmed Jabreel, an aide to rebel leader Mustafa Abdel Jalil, said: “Any negotiations must be on the basis that Gaddafi will step down. There can be no other compromise.”

One of Gaddafi’s sons, Saadi, said in an interview with Al-Arabiya television his father had not yet thrown his army into full battle against rebels, saving it to shield Libya against foreign attack, and civil war could erupt if he did.

In an interview with France 24 television, Gaddafi said Libya was an important partner for the West in containing al-Qaeda and illegal migrants trying to reach Europe.

So far tens of thousands of migrant workers have fled but few Libyans. “If we get a massive outflow of Libyans, this would create a refugee situation, so we appeal to all countries to keep their doors open and be ready to provide assistance as humanitarian law requires,” UN High Commissioner for Refugees Antonio Guterres said. – Reuters