In the mood for a fight 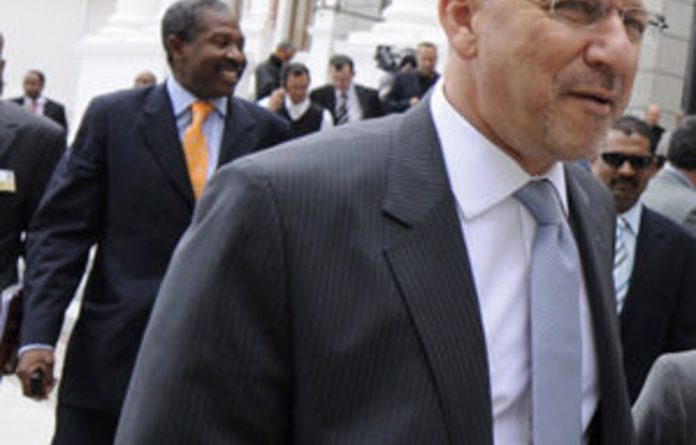 Trevor Manuel has not lost his sense of humour. “Welcome to a meeting of the secret society otherwise known as the National Planning Commission [NPC]” was how he opened the strategic planning session on a low-carbon economy.

“This is our coming-out party,” he added wryly. Indeed. Many of the experts, academics and other stakeholders assembled at Liliesleaf Farm had begun to wonder if they had been dreaming when the establishment of the commission was announced shortly after the April 2009 general election.

Wisely, the commission decided not to rush to print, but to go away and carefully think about what it was doing and the complex long-term problems it was being asked to cogitate on. There is, of course, a thin line between prudent deliberation and ponderous procrastination. There is a danger that by the time its first national plan comes out in the third quarter of the year, the horse will have well and truly bolted.

Crucial policy decisions have been processed during the two years that the NPC has been considering its options. The integrated resource plan II (IRP2), for example, is in the process of making very big choices about the country’s future energy needs and supply.

A climate change Green Paper is now tabled and under discussion. As the United Nations Conference of Parties (COP17) meeting in Durban approaches, so too will the pressure fall on the government to add substance to its mitigation target and present proposals that will attract adaptation funding (mostly concerning our growing water crisis).

Meanwhile, tortoise like, the NPC will meander along. But it could yet catch the hare. For there is no doubting either the intellectual horsepower of the commissioners or their ideological pluralism; and they are decent as well as dedicated people.

The danger is that it produces a plan that is less than a tight, detailed, persuasive narrative — explaining how South Africa is going to grow its economy while reducing carbon emissions, adapting to climate change and creating millions of new, decent jobs in the next 20 years — and more a treatise of passing academic interest but little or no political traction.

Industrial revolution
To achieve the former will require boldness and vision, as well as brilliance and cogency. Lord Stern told the NPC last week that nothing less than an industrial revolution is required, but that South Africa is well placed to lead in building a viable low-carbon economy if it is brave and innovative, thanks to its natural endowments (wind, solar, waves, land), high-tech excellence and “high finance”.

But it assumes that the plan, and therefore Manuel, gets strong political backing from the very top — and that is very far from certain. Lord Stern reminded Manuel that it was India’s second national plan that made its mark, not its first. So all may not be lost; the problem is that India’s transition took place at a time of more modest global change, when the rate of change and the urgency of the need for dramatic change was far less severe.

Although the NPC’s work is divided into five work streams — the economy, led by deputy commissioner Joel Netshitenzhe, material conditions (Phil Harrison), nation-building (Bridgette Gasa), institutions (Pascal Moloi) and human conditions (Vivienne Taylor) — with COP17 at the end of the year, Manuel is right to have picked on sustainability and low carbon as the pivot for the NPC’s first major public engagement.

As with the World Cup 2010, South Africa will be in the global spotlight: not only must it run a very good show (and it is a very different show to run than the football festival) but its own practices and policies must also stand up to global scrutiny.

This is a good moment, then, for the NPC to look what the meeting last week was calling the “Minerals and Energy Complex” in the eye and demand change. South Africa’s development path has been dependent on this complex; the question now is whether its future will be any less dependent. The power of the sector makes a revolution hard. Substantial carbon taxes must be imposed, at an absolute minimum, to start to shift the incentive structure that drives behaviour.

In doing so, the NPC has an opportunity to describe what a “green economy” really looks like because it has become abundantly clear that no one else in the Cabinet knows. After the recent budget, senior members of the national treasury were privately admitting that they “put the green stuff in the speech, because we have to, not because we know what it is” — which may explain why the budget gave such a measly sum (R800-million) towards the development of renewable energy.

Manuel’s task
Breaking the “production-consumption-emissions” link is fundamental to a “green economy”. South Africa’s progress is faltering in this regard. Although the emissions path is better than the “growth without constraints” path charted by the “long-term mitigations scenarios” research commissioned and adopted by Cabinet in 2008, there is a big gap between it and the “required by science” path that scenarios set as a target and that Jacob Zuma reconfirmed days before the COP15 meeting in Copenhagen in December 2009.

Manuel’s task, therefore, is a giant one. He appears up for it, and his understanding of global political economy and climate politics is such that he is well positioned to lead a revolution.

And, if the tenor of his now famous open letter to Jimmy Manyi last week is anything to go by, he is also sufficiently angry to take on the powerful interest groups that stand in the way.

It was his — and South Africa’s — Lloyd Bentsen moment. Remember him and his magnificent put-down of the fellow vice-presidential candidate, the awful republican Dan Quayle, after Quayle had unwisely referred to John F Kennedy during their televised debate?

“Believe me, Senator, I knew Jack Kennedy and you are no Jack Kennedy,” was Bentsen’s crushing line. Manuel’s “What did you do in the war, Jimmy?” will go down in the annals of South African political folklore and it ought to do for Manyi’s career what Bentsen’s did for Quayle’s.