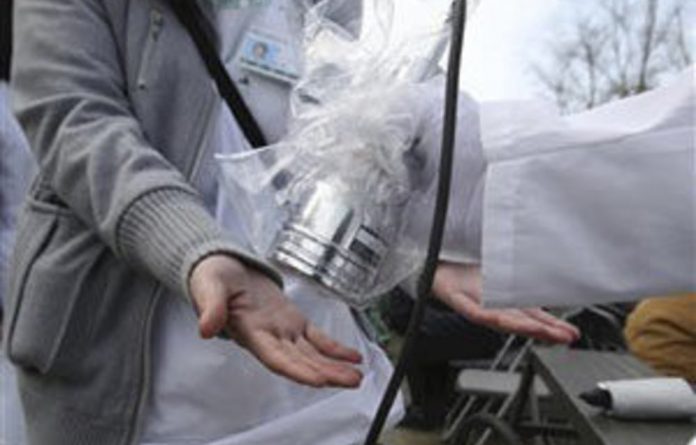 The death toll in Japan’s earthquake and tsunami will probably exceed 10 000 in one state alone, an official said on Sunday, as millions of survivors were left without drinking water, electricity and proper food along the pulverised northeastern coast.

Although the government doubled the number of soldiers deployed in the aid effort to 100 000, it seemed overwhelmed by what’s turning out to be a triple disaster: Friday’s quake and tsunami damaged two nuclear reactors at a power plant on the coast, and at least one of them appeared to be going through a partial meltdown, raising fears of a radiation leak.

The police chief of Miyagi prefecture told a gathering of disaster relief officials that his estimate for deaths was more than 10 000, police spokesperson Go Sugawara told the Associated Press. Miyagi has a population of 2,3-million and is one of the three prefectures hardest hit in Friday’s disaster. Only 379 people have officially been confirmed as dead in Miyagi.

The nuclear crisis posed fresh concerns for those who survived the earthquake and tsunami, which hit with breathtaking force and speed, breaking or sweeping away everything in its path.

“First I was worried about the quake, now I’m worried about radiation. I live near the plants, so I came here to find out if I’m OK. I tested negative, but I don’t know what to do next,” Kenji Koshiba, a construction worker, said at an emergency centre in Koriyama town near the power plant in Fukushima.

According to officials, at least 1 200 people were killed — including 200 people whose bodies were found on Sunday along the coast — and 739 were missing in the disasters.

In a rare piece of good news, the Defence Ministry said a military helicopter on Sunday rescued a 60-year-old man floating off the coast of Fukushima on the roof of his house after being swept away in the tsunami. He was in good condition.

The US Geological Survey calculated the initial quake to have a magnitude of 8,9, while Japanese officials raised their estimate on Sunday to 9,0. Either way it was the strongest quake recorded in Japan. It has been followed by more than 150 powerful aftershocks.

Teams searched for the missing along hundreds of kilometres of Japanese coastline, and hundreds of thousands of hungry survivors huddled in darkened emergency centres that were cut off from rescuers and aid. At least 1,4-million households had gone without water since the quake struck and about 2,5-million households were without electricity. Temperatures were to dip near freezing overnight.

Trade Minister Banri Kaeda said the region was likely to face further blackouts and that power would be rationed to ensure supplies go to essential needs.

Large areas of the countryside remained surrounded by water and unreachable. Fuel stations were closed and people were running out of petrol for their vehicles.

Public broadcaster NHK said about 380 000 people have been evacuated to emergency shelters, many of them without power.

In Iwaki town, residents were leaving due to concerns over dwindling food and fuel supplies. The town had no electricity and all stores were closed. Local police took in about 90 people and gave them blankets and rice balls but there was no sign of government or military aid trucks.

At a large refinery on the outskirts of the hard-hit port city of Sendai, 30m-high bright orange flames rose in the air, spitting out dark plumes of smoke. The facility has been burning since Friday. A reporter who approached the area could hear the roaring fire from afar, and after a few minutes the gaseous stench began burning the eyes and throat.

At a small park near the refinery, trees and large swaths of grass were covered in thick black crude oil. Two large tanker trucks were jammed sideways among the trees, their gas tanks crumpled.

Mayumi Yagoshi, an office worker at the refinery, said she had taken the day off Friday because she had slipped and hurt her back.

Smashed cars, broken homes
“I was lucky, but I feel really bad. My mobile phone doesn’t work and I have no idea what happened to everyone else,” she said.

Residents said the water surged in and quickly rose higher than the first floor of buildings. At Sengen General Hospital the staff worked feverishly to haul bedridden patients up the stairs one at a time. With the halls now dark, those that can leave have gone to the local community centre.

“There is still no water or power, and we’ve got some very sick people in here,” said hospital official Ikuro Matsumoto.

One older neighbourhood sits on low ground near a canal. The tsunami came in from the canal side and blasted through the frail wooden houses, coating the interiors with a thick layer of mud and spilling their contents out into the street on the other side.

Police cars drove slowly through the town and warned residents through loudspeakers to seek higher ground, but most simply stood by and watched them pass.

Dozens of countries have offered assistance. Two US aircraft carrier groups were off Japan’s coast and ready to provide assistance. Helicopters were flying from one of the carriers, the USS Ronald Reagan, delivering food and water in Miyagi.

Corpses
Two other U.S. rescue teams of 72 personnel each and rescue dogs were scheduled to arrive later on Sunday, as was a five-dog team from Singapore.

In Sendai, firefighters with wooden picks dug through a devastated neighbourhood. One of them yelled: “A corpse.” Inside a house, he had found the body of a gray-haired woman under a blanket.

A few minutes later, the firefighters spotted another — that of a man in black fleece jacket and pants, crumpled in a partial foetal position at the bottom of a wooden stairwell. From outside, the house seemed almost untouched, two cracks in the white walls the only signs of damage.

The man’s neighbour, 24-year-old Ayumi Osuga, dug through the completely destroyed remains of her own house, her white mittens covered by dark mud.

Osuga said she had been playing origami, the Japanese art of folding paper into figures, with her three children when the quake stuck. She recalled her husband’s shouted warning from outside: “‘GET OUT OF THERE NOW!”‘

She gathered her children — aged two and six — and fled in her car to higher ground with her husband. They spent the night huddled in a hilltop home belonging to her husband’s family about 20km away.

“My family, my children. We are lucky to be alive,” she told the Associated Press.

“I have come to realise what is important in life,” Osuga said, nervously flicking ashes from a cigarette on to the rubble at her feet as a giant column of black smoke billowed in the distance. – Sapa-AP