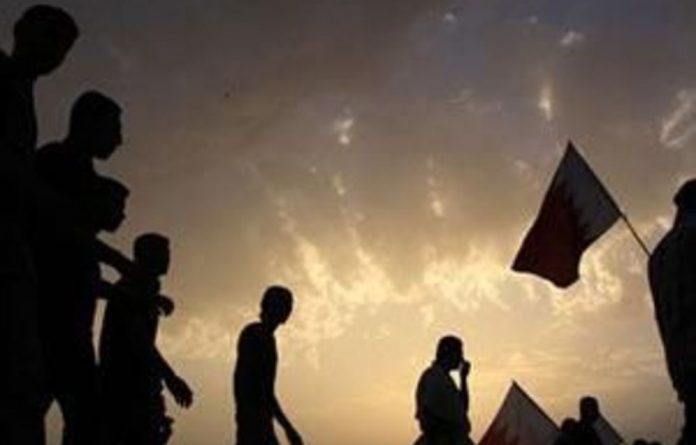 Thousands of anti-government demonstrators cut off Bahrain’s financial centre and drove back police trying to push them from the capital’s central square — shaking the tiny island kingdom on Sunday with the most disruptive protests since calls for more freedom erupted a month ago.

Demonstrators also clashed with security forces and government supporters on the campus of the main university in the Gulf country, the home of the United States (US) Navy’s Fifth Fleet.

The clashes fuelled fears that Bahrain’s political crisis could be stumbling towards open sectarian conflict between the ruling minority Sunnis and Shi’ites, who account for 70% of the nation’s 525 000 people.

In some neighbourhoods, vigilantes set up checkpoints to try to keep outsiders from entering. Bahrain’s interior ministry warned on Saturday that the “social fabric” of the nation was in peril.

Bahrain’s Crown Prince Salman bin Hamad Al Khalifa said the nation has “witnessed tragic events” during a month of unprecedented political unrest. But he warned, “the right to security and safety is above all else”.

“Any legitimate claims must not be made at the expense of security and stability,” Salman said in a televised speech late on Sunday.

‘Upset’
A day after visiting US Defence Secretary Robert Gates urged quick progress towards reform, thousands of protesters gathered before dawn to block King Faisal Highway, a four-lane expressway leading to Bahrain’s main financial district in downtown Manama, causing huge traffic chaos during morning rush hour and preventing many from reaching their offices on the first day of the work week.

“No one was able to go to work today. Thugs and protesters were blocking the highway,” complained Sawsan Mohammed (30) who works in the financial district. “I am upset that Bahrain is no longer a stable place.”

Security forces dispersed about 350 protesters “by using tear gas”, the government said. But traffic was clogged until late-morning, and many drivers sent messages of rage and frustration to social media sites.

“I blame the protesters for what’s happened in Bahrain today,” said Dana Nasser (25) who was caught in the traffic chaos and never made it to her office.

About 3km away, police at the same time moved in on Pearl Square, site of a month-long occupation by members of Bahrain’s Shi’ite majority calling for an elected government and equality with Bahrain’s Sunnis.

Many protesters in recent days have pressed their demands further to call for the ouster of the Sunni dynasty that has held power for more than two centuries.

Activists tried to stand their ground and chanted “Peaceful! Peaceful!”

The crowd swelled into thousands, with protesters streaming to the square to reinforce the activists’ lines as police continued firing tear gas. By early-afternoon, police pulled back from the square, witnesses said.

Two protesters sustained serious head injures and hundreds sought medical help, mostly with breathing problems from tear gas, hospital officials said on condition of anonymity because they were not authorised to speak to reporters.

The Gulf kingdom holds particular importance to Washington as the host of the Fifth Fleet, the main American military counterweight to Iran’s efforts to expand its armed forces and reach into the Gulf.

Bahrain has also tried hard to position itself as an attractive investment destination and Middle East banking centre. Even the passport stamps issued to incoming visitors declare the kingdom as “business-friendly Bahrain”. — Sapa-AP