Between a rock and a pagoda 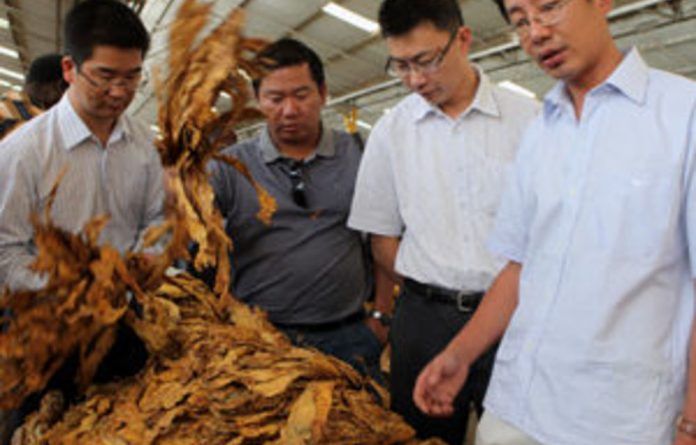 The Chinese storekeeper behind the till rings up sale after sale while he keeps a keen eye on the door, where a guard is controlling the crowds entering to hunt for bargains such as the day’s special — a pack of 10 pairs of children’s plastic sandals for $12.

Next door, at Jinhua Enterprises, hordes of customers buzz around shelves laden with groceries and home electronics. The stores are dingy, the service is poor and the goods are tacky, but business is booming.

Under President Robert Mugabe’s controversial empowerment laws, which bar foreigners from owning small retail stores, these two shops should not even be open. That they are has angered Mugabe’s supporters, who have been pushed out of business by the Chinese and are now campaigning for the expulsion of Asian traders. But more and more Chinese are arriving, taking over retail space in the teeming downtown area.

This presents a dilemma for Mugabe. His anti-foreign bluster has galvanised supporters but he is careful not to upset China, his last remaining economic benefactor and protector in the United Nations Security Council. Even as the threats to take over foreign companies grow louder Saviour Kasukuwere, the minister of empowerment, has announced that Chinese companies will be spared. But the pressure on Mugabe is building up.

A few weeks ago, Zanu-PF youths rampaged through these streets, looting and forcing foreigners to shut their stores and the Affirmative Action Group, a radical pro-Zanu-PF black empowerment pressure group, wants Mugabe to turn back the Chinese tide.

“The law is clear on this issue. We cannot allow foreigners to come all the way from China just to sell sweets here. These are things that our people can do. We just want the government to apply the law,” said Supa Mandiwanzira, the group’s leader.

Retail sector reserved
At a recent business conference, he asked Kasukuwere why the law did not apply to the Chinese. Reflecting the sensitivities, Kasukuwere replied: “That, my brother, is a difficult one.”

David Chapfika, who heads the state board that monitors empowerment, has said that “the retail sector is reserved for indigenous people, not even blacks from elsewhere”.

Similarly, empowerment activist Paddington Japajapa said the term “foreigner” was, wrongly, being applied only to Westerners. “If we are talking of foreigners we also mean the Chinese and Indians, not only Americans or British.” But the political and economic hold that China has over isolated Mugabe is forcing him to protect even these small Chinese businesspeople from his own supporters.

The Development Bank of China is said to be planning $10-billion worth of investments in Zimbabwe over the next five years. Last week, Chinese merchant Sinotex announced a $500-million cotton production deal that could benefit up to 300 000 rural farmers, the bedrock of Zanu-PF support.

The 40% rise in tobacco production expected this year is largely driven by Chinese buying. One of the biggest tobacco buyers, Tian Ze, has been spared from selling the required 51% to locals.

Explaining how companies qualify for such exemptions, Kasukuwere said: “We look at their disposition towards our people.” Anjin China has diamond concessions in the controversial Marange fields, while the China National Nuclear Corporation is said to be prospecting for uranium.

Foreign landholding is another controversy within Zanu-PF, but an official told the Mail & Guardian that the Beidahuang Group, said to run China’s biggest agribusiness, is negotiating for cane and forestry estates.

What is frustrating Zanu-PF is that the Chinese have not matched their rhetoric with real aid. Last month visiting Chinese Foreign Minister Yang Jiechi called Zimbabwe “a good friend, good brother and good partner” but gave a grant of only $8-million.

There are other more visible signs of China’s influence. On the northern outskirts of Harare the Chinese are building the Robert Mugabe National School of Intelligence, a large military academy. Its high security wall stretches for more than a kilometre and a pagoda marks its imposing gates.