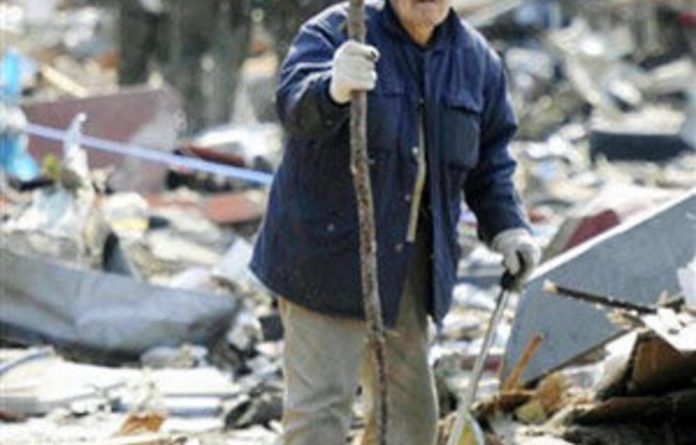 A hydrogen explosion rocked the earthquake-stricken nuclear plant in Japan where authorities have been working desperately to avert a meltdown, compounding a nuclear catastrophe caused by Friday’s massive quake and tsunami.

The core container was intact, Jiji news agency said, quoting the plant operator, Tokyo Electric Power (Tepco), but the local government warned those still in the 20km evacuation zone to stay indoors. Seven people, six of them soldiers, were missing in the blast, Jiji said.

A TV station also reported a new tsunami on Monday but it turned out to be a false alarm.

Japan battled through the weekend to prevent a nuclear catastrophe and to care for the millions without power or water in its worst crisis since World War II, after the huge earthquake and tsunami that probably killed more than 10 000 people.

Kyodo news agency said 2 000 bodies had been found on Monday on the shores of Miyagi prefecture, which took the brunt of the tsunami.

The government had warned of a possible explosion at the Number Three reactor because of the buildup of hydrogen in the building housing the reactor. TV images showed smoke rising from the Fukushima facility, 240km north of Tokyo.

Tepco had earlier halted injection of sea water into the reactor, resulting in a rise in radiation levels and pressure. The government had warned that an explosion was possible because of the buildup of hydrogen in the building housing the reactor.

A badly wounded nation has seen whole villages and towns wiped off the map by a wall of water, leaving in its wake an international humanitarian effort of epic proportions.

As the country returned to work on Monday, markets began estimating the huge economic cost, with Japanese stocks plunging about 5% and the yen falling against the dollar.

Prime Minister Naoto Kan said the situation at the crippled Fukushima nuclear plant remained worrisome and that the authorities were doing their utmost to stop damage from spreading.

“The earthquake, tsunami and the nuclear incident have been the biggest crisis Japan has encountered in the 65 years since the end of World War II,” a grim-faced Kan had told a news conference on Sunday.

“We’re under scrutiny on whether we, the Japanese people, can overcome this crisis.”

Officials confirmed on Sunday that three nuclear reactors north of Tokyo were at risk of overheating, raising fears of an uncontrolled radiation leak.

Engineers worked desperately to cool the fuel rods in the damaged reactors. If they fail, the containers that house the core could melt, or even explode, releasing radioactive material into the atmosphere.

Death toll ‘above 10 000’
Broadcaster NHK, quoting a police official, said more than 10 000 people may have been killed as the wall of water triggered by Friday’s 8,9-magnitude quake surged across the coastline, reducing whole towns to rubble. It was the biggest to have hit the quake-prone country since it started keeping records 140 years ago.

“I would like to believe that there still are survivors,” said Masaru Kudo, a soldier dispatched to Rikuzentakata, a nearly flattened town of 24 500 people in far-northern Iwate prefecture.

Kyodo said 80 000 people had been evacuated from a 20km radius around the stricken nuclear plant, joining more than 450 000 other evacuees from quake and tsunami-hit areas in the northeast of the main island Honshu.

Almost two million households were without power in the freezing north, the government said. There were about 1,4-million without running water.

“I am looking for my parents and my older brother,” Yuko Abe (54) said in tears at an emergency centre in Rikuzentakata.

“Seeing the way the area is, I thought that perhaps they did not make it. I also cannot tell my siblings that live away that I am safe, as mobile phones and telephones are not working.”

Nuclear crisis
The most urgent crisis centres on the Fukushima Daiichi nuclear complex, where authorities said they had been forced to vent radioactive steam into the air to relieve reactor pressure.

The complex was rocked by a first explosion on Saturday, which blew the roof off a reactor building. The government had said further blasts would not necessarily damage the reactor vessels.

Tepco said on Monday it had reported a rise in radiation levels at the complex to the government. On Sunday the level had risen slightly above what one is exposed to for a stomach X-ray, the company said.

Authorities had been pouring sea water in two of the reactors at the complex to cool them down.

Nuclear experts said it was probably the first time in the industry’s 57-year history that sea water has been used in this way, a sign of how close Japan may be to a major accident.

“Injection of sea water into a core is an extreme measure,” Mark Hibbs of the Carnegie Endowment for International Peace. “this is not according to the book.”

A Japanese official said 22 people have been confirmed to have suffered radiation contamination and up to 190 may have been exposed. Workers in protective clothing used hand-held scanners to check people arriving at evacuation centres.

‘Not another Chernobyl’
The nuclear accident, the worst since Chernobyl in Soviet Ukraine in 1986, sparked criticism that authorities were ill-prepared for such a massive quake and the threat that could pose to the country’s nuclear power industry.

Prime Minister Kan on Sunday sought to allay radiation fears: “Radiation has been released in the air, but there are no reports that a large amount was released,” Jiji news agency quoted him as saying. “This is fundamentally different from the Chernobyl accident.”

Kan said food, water and other necessities such as blankets were being delivered by vehicles but because of damage to roads, authorities were considering air and sea transport.

Thousands spent another freezing night huddled in blankets over heaters in emergency shelters along the northeastern coast, a scene of devastation after the quake sent a 10-metre (33-foot) wave surging through towns and cities in the Miyagi region, including its main coastal city of Sendai.

Economic impact
The earthquake has forced many firms to suspend production and shares in some of Japan’s biggest companies tumbled on Monday, with Toyota dropping about 7%. Shares in Australian-listed uranium miners also dived.

Already saddled with debts twice the size of its $5-trillion economy and threatened with credit downgrades, the government is discussing a temporary tax rise to fund relief work.

Analysts expect the economy to suffer a hit in the short term, then get a boost from reconstruction activity.

“When we talk about natural disasters, we tend to see an initial sharp drop in production … then you tend to have a V-shaped rebound. But initially everyone underestimates the damage,” said Michala Marcussen, head of global economics at Societe Generale.

Ratings agency Moody’s said on Sunday the fiscal impact of the earthquake would be temporary and have a limited play on whether it would downgrade Japan’s sovereign debt.