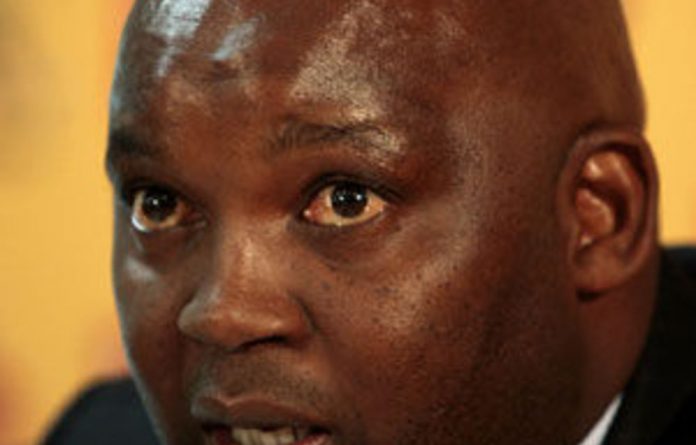 Tottenham Hotspur midfielder Steven Pienaar is promoted from vice-captain to lead Bafana in a match they must win to be sure of retaining top place at the halfway stage in a group including Niger and Sierra Leone.

Portsmouth defender-cum-midfielder Mokoena was continually criticised for being slow and indecisive during the 2010 World Cup as South Africa became the first host nation not to reach the second round.

But former national team striker Mosimane, who succeeded Brazilian Carlos Alberto Parreira after the Cup, kept faith with the 30-year-old for Africa Cup of Nations qualifiers against Niger and Sierra Leone.

A hint of what lay ahead for Mokoena came when he was excluded from the squad for a friendly against the United States last November and was only a substitute in another warm-up match last month with Kenya.

Putting his own stamp on the national team
Mosimane refused to explain why he dumped the 104-cap central defender after announcing his 24-man squad for the March 26 showdown with the star-stacked Pharaohs at Ellis Park.

“We need all our experienced players for a big match like this, but we also need to move forward,” Mosimane told reporters at the Soccer City stadium where Spain defeated The Netherlands 1-0 last July to lift the World Cup.

“I love and respect Aaron and have protected him when all the ‘wolves’ were against him. He has given his best as captain, but this time he is not in the team I have selected.”

Mosimane, slowly but surely putting his own stamp on a national team ranked ninth in Africa after two spells assisting Parreira over a four-year period, is expected to choose Bongani Khumalo and Morgan Gould in central defence.

The coach dismissed concerns that Khumalo lacked match fitness after failing to make a first-team appearance since his January transfer to White Hart Lane from SuperSport United.

“Bongani has been playing a lot of games behind the scenes so it is not as if he will not be fit. He is training hard with top-quality footballers and doing well,” said the coach.