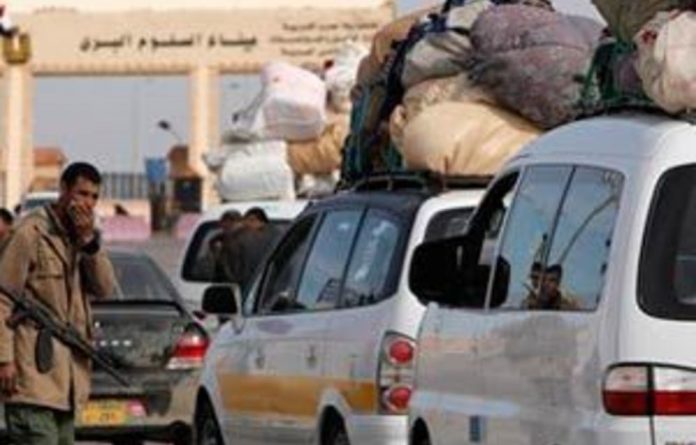 Libya’s army pounded an opposition-held city in the country’s west and battled fighters trying to block its advance on a rebel bastion in the east on Wednesday amid flagging diplomatic efforts to end the bloodshed.

United Nations Secretary-General Ban Ki-moon called for an immediate ceasefire by all parties and United States Secretary of State Hillary Clinton said the US hoped for a UN Security Council vote aimed at ending Libya’s conflict “no later than Thursday”.

Saying Muammar Gaddafi seemed determined to kill as many as Libyans as possible in his violent effort to quell a month-long uprising, she said “many different actions” were being considered not just a no-fly zone.

The US, Russia, China, Germany, India and other council members are either undecided or voiced doubts about the proposal for a no-fly zone being proposed by Britain and France.

In Geneva, former French foreign minister Bernard Kouchner lambasted the international community for its delay in imposing a no-fly zone, saying it was too late to save lives.

“A no-fly zone is a minimum. It’s certainly already too late,” Kouchner said of the crackdown on an increasingly vulnerable-looking uprising inspired by pro-democracy revolts in Egypt and Tunisia.

“We’ve known for three weeks that the poor civil society, the poor people, are dying. And we are doing nothing,” he told World Radio Switzerland.

Italy, a potential base for a no-fly zone proposed by Britain and France, ruled out military intervention in the oil-exporting North African country.

“We cannot have war, the international community should not, does not want and cannot do it,” Foreign Minister Franco Frattini said in Rome.

Tanks and artillery
Gaddafi’s forces used tanks and artillery to try to retake the city of Misrata, the last big rebel stronghold in western Libya, residents said. But rebel fighters in Misrata, on the Mediterranean coast about 200 km east of Tripoli, said they had stalled a ground attack on the city and seized some tanks from pro-Gaddafi units.

Near Ajdabiyah, a crucial city serving as a gateway to Benghazi, the seat of opposition to Gaddafi and a prime target for government forces, Libyan soldiers said they had met resistance from rebels when they fought for control of the town.

Reuters photographer Ahmed Jadallah said he saw a number of tanks deployed along the coastal road as well as tank carriers returning empty from the frontline.

One rebel, Mohammed al Maghrabi, said there were both rebels and government forces in the town “and the fighting has been fierce. We control the eastern gate, and more rebels are coming through from the east, so god willing we’ll push them out soon.”

In Benghazi, seat of the insurgents’ provisional national council, the mood was a mixture of defiance and nervousness, with some citizens predicting a bloodbath and others confident the rebels would still snatch victory.

Libyan state television said two major tribes in Benghazi, the Tarhuna and Warfalla, told it they supported Gaddafi. The report could not immediately be confirmed.

Clinton told CBS various options were being considered to end the conflict.

No-fly zone
“Many different actions are being considered, yes, a no-fly zone, but others as well to enable the protection of Libyan citizens against their own leader, who seems determined to turn the clock back and kill as many of them as possible,” she said.

A UN Security Council draft resolution on a no-fly zone over Libya to protect civilians was circulated on Tuesday, which would authorize “all necessary measures to enforce” a ban on flights.

A newspaper in Benghazi reported that a Russian-made MiG-36 aircraft, operated by the rebels, had bombed the airport at Al Kardabiya near Gaddafi’s hometown of Sirte on Wednesday.

The Brnieq newspaper said the bombing raid was in retaliation for an attack by warplanes on Benghazi’s airport. Libya’s Jana state news agency quoted the director of Sirte airport as saying the report was “false and unfounded”.

Both the rebel administration and the government in Tripoli have in the past few days put out information about military gains which has later turned out to be untrue.

The Libyan army told residents of Benghazi to lay down their arms, and one of Gaddafi’s sons, Saif al-Islam, told Euronews TV that Libya’s second largest city would fall whether or not there was a no-fly zone.

“Everything will be over in 48 hours,” he said.

Saif, once seen as Libya’s Western-friendly face, lashed out at President Nicolas Sarkozy for being the first foreign leader to condemn Gaddafi and back the rebel Libyan National Council, calling him a “clown”.

Gaddafi challenges west
Libyan state television called on loyalist forces in the east to join the government advance towards Benghazi.

Aid organisation Medecins Sans Frontieres said the violence had forced it to withdraw its staff from Benghazi and begin moving teams to Alexandria in Egypt. The international Red Cross left Benghazi for Tobruk.

A meeting of Group of Eight foreign ministers in Paris this week failed to get the agreement France was hoping for to support a no-fly zone being imposed over Libya, an issue that has also divided the UN Security Council.

NATO has set three conditions for it to enforce a no-fly zone over Libya: regional support, proof its help is needed and a Security Council resolution.

An Arab League call for a no-fly zone satisfies the first condition, but with access to most of Libya barred by Gaddafi’s security forces, hard evidence that NATO intervention is needed to avert atrocities or a humanitarian disaster is scarce.

On the Egyoptian border, Egyptian and African guest workers as well as Libyans trekked out of the country.

Issam Abdul Sattar from Ajdabiyah (34) said he had left on Tuesday evening. “I left last night after I saw jets bombing the city. I was terrified,” he said. — Reuters