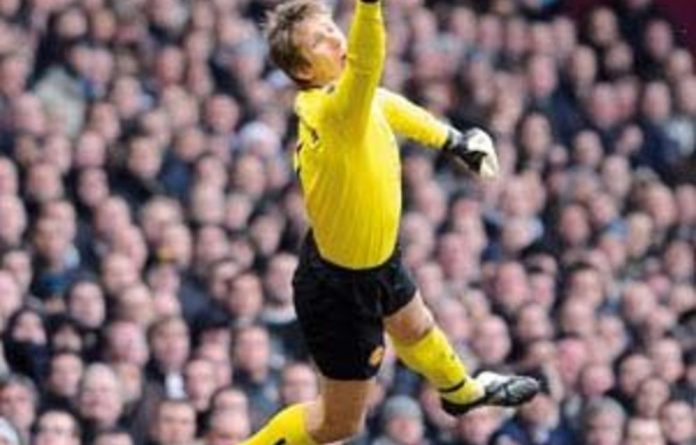 “No,” Edwin van der Sar said firmly when the inevitable question was asked about whether there was any way he could be tempted to put off retirement by another year. There was a polite smile and, up close, you could see the crow’s feet at the corner of his eyes. Van der Sar is 41 later this year — time to go, he says, even though Manchester United’s supporters are imploring him to change his mind.

“We are trying to persuade him to stay on, too,” Wayne Rooney said after the beginning of what promises to be a concerted campaign from the Old Trafford crowd during the FA Cup defeat of
Arsenal last weekend.

“I was speaking to him in the shower about it. It’s his decision and we’ve got to respect that but he’s such a great goalkeeper and, for me, still the best in the world, despite his age.”

The supporters articulated it with long, impassioned chants of “one more year”. There were follow-up cries of “Fergie, sign him up” and one wonderful moment, during a break in play in the second-half, when the stadium rose to acclaim the man whose flawless goalkeeping had put United on their way towards an FA Cup semifinal against Manchester City. Van der Sar looked around him, lifted his hands above his head and nodded appreciatively. He looked genuinely moved.

Yet Van der Sar is also at a point in his life when he seems totally comfortable in his own skin. “I don’t hate the idea of retirement,” he said. “I am looking forward to it. I am at my peak and I think it will be nice to finish at my peak.”

This is the key. He could conceivably play another year but why chance it? Doing so would leave him vulnerable to the possibility of ruining a happy ending and the sense that, like so many people in football, he has stayed on too long.

‘A proud man’
What if the reflexes start to dull and, because of stubbornness and an insecurity about letting go, his career burns out like a discarded cigarette? Hypothetical, yes, but the risk is too great. “Everybody doubts themselves,” Van der Sar said. “Every writer doubts himself, every artist doubts himself and every football player does.”

Sir Alex Ferguson summed it up just as eloquently. “We wish he was 21 rather than nearly 41 but nature catches you eventually in life,” United’s manager said, reverting to the theme he had chosen in November when the announcement was made that this would be the final year of Van der Sar’s playing career.

“The difficulty for a goalkeeper when he gets to 40 is what happened with Peter Shilton,” Ferguson had said back then. “All of a sudden, because of age, Shilton’s form just collapsed and I don’t think Edwin would want that. He is such a proud man.”

Shilton went on to play until he was 47, winding up at Leyton Orient in the old Fourth Division. Van der Sar has an entirely different plan that, if fulfilled, will see him playing in FA Cup and Champions League finals and lifting another Premier League winner’s medal.

“It will be a weight off my shoulders,” he said of retirement. “I want to finish at the top, playing well.”

The dilemma for United is how to replace a man Ferguson now ranks alongside Peter Schmeichel as
the greatest goalkeepers in the club’s history.

‘Exceptional talent’
Against Arsenal there were times when it felt as though someone could chuck a handful of loose change into the air and he would catch every coin.

“He is one of the best goalkeepers in the world,” Arsene Wenger said. “If Man United have him in goal at 40 years of age … no matter who they buy next season they will feel the difference because not only does he have exceptional experience, he has exceptional talent.”

The advantage for Ferguson is that he has had plenty of time to prepare the process.

A shortlist features Maarten Stekelenburg of Ajax and Manuel Neuer of Schalke. Anders Lindegaard has been signed as backup and Tomasz Kuszczak will be allowed to leave.

Van der Sar was already speaking from what sounded like a retirement speech. “I will miss football. It has been 20 years. I have some nice things, a lovely family.”

Now Van der Sar is looking forward to some time out — but not quite yet. –