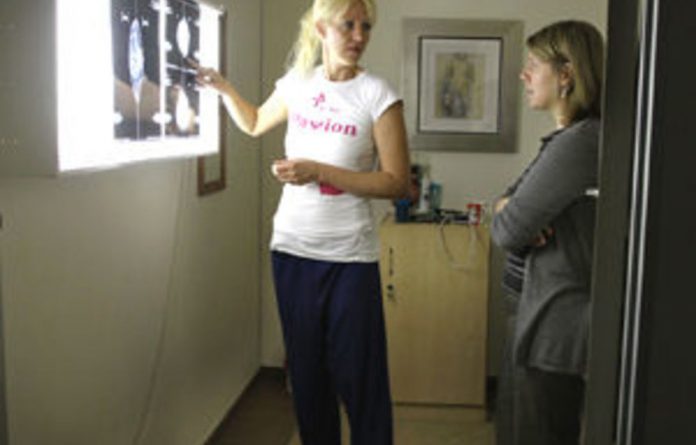 Breast cancer strikes terror into the hearts of women in their 40s and 50s. Not just because we tend to believe that this is the time of life when you’re likely to get it, but also because women of this generation grew up hearing whispered stories about the horror of treatment.

“Radical mastectomy,” they said, which meant the loss of a breast and cutting into the armpit. And this was followed by pain and swelling and even disablement.

Fortunately, this is no longer true. Treatment protocols have been turned on their head in the past decade and now 2011 research will change how surgeons do their job once more.

No longer should women accept the loss of a breast without reconstruction as inevitable. Breast cancer fundis such as Dr Carol-Ann Benn of the Breast Care Centre at Milpark Hospital in Johannesburg now treat both conservatively — removing as little tissue as possible — and reconstruct breasts immediately, aiming to leave women as close to their original state, with as little discomfort as they can.

Neither should they accept the removal of lymph glands through their armpits — axillary lymph node dissection. Axillary in this instance means armpit, which the surgeons cut into to reach lymph nodes at the edge of the chest muscle. This surgical intervention is, it now seems, unnecessary. And that’s good news for breast cancer patients who’d like to avoid potentially painful complications.

No more lymph node removal?
New research from the United States recently published will, say experts in the field, require surgeons to diametrically change the
way they work.

For more than a century it’s been standard procedure for surgeons to take a scorched-earth approach to lymph nodes in the armpits, removing them, with the breast tissue, in the belief that this would prevent the -cancer from spreading through the lymphatic system.

Now a study published in The Journal of the American Medical Association in February shows that, for as many as 20 breast cancer patients in a 100, removal of axillary lymph nodes was unnecessary because it conferred no extra protection.

The women in the study were all at stage T1 or T2 — their breast tumours were less than 5cm across. These tumours had been removed by lumpectomies, a conservative surgery that removes the tumour alone and leaves the bulk of the breast tissue in place, followed by radiation and, in some cases, other treatments such as chemotherapy.

All the women had cancer detected in the sentinel lymph node, which means the cancer had moved beyond the breast. “The axilla [armpit] is usually the first port of call for breast cancer,” says Benn. She explains that the sentinel node in this area is the first gland the cancer is likely to reach because cells from the breast with the cancer drain into it, making it the one most likely to contain cancer.

“Sentinel means ‘guard’ or ‘watchdog’ and ‘first’,” she says. “All surgeons doing breast cancer surgical operations should be trained in the techniques of sentinel lymph node biopsies.” This is an essential aid to prognosis because this node can tell medics whether the cancer is trying to send cells out into the rest of the body (metastasising or spreading).

“Surgeons use both a blue dye and an isotope to determine which is the sentinel node. When the cancer drains to sites that are not readily visible, the isotope is the only sure way of -detecting it.”

But even when the sentinel node does indeed contain signs that the cancer has spread, it’s not necessary to remove all the lymph nodes, the study found.

Equal survival rates
The researchers compared cases in which the standard procedure of removing many nodes was followed with the removal of the sentinel node or nodes alone. The women in the study were randomly assigned to one of two groups, each close on 500 strong.

For those treated the traditional way an average of 17 nodes were removed; for the other group, the sentinel node was removed and perhaps one other adjacent node. The researchers revisited the patients after about six years and found that the
survival rate was almost exactly the same — 91,8% for the first group and marginally better at 92,5% for the second group.

Lead author Dr Armando Giuliano and his team said: “Implementation of this practice change would improve clinical outcomes in thousands of women each year by reducing the complications associated with axillary lymph node dissection and improving quality of life with no diminution in survival.”

What complications are they talking about? After armpit surgery, 20% to 30% of women develop
the unpleasant and painful fluid retention called lymphoedema (with radiation therapy, the incidence can jump to 50%).

Early physiotherapy can prevent this problem, says Cape Town physio-therapist Mariette Pitlo. A study published in the British Medical Journal in January last year found that just 7% of those who had physio soon after surgery developed lymphoedema, as opposed to 35% of those who did not receive physio.

“In my experience of more than 25 years of mastectomy rehabilitation, there have been few women who have had ongoing problems,” said Pitlo. “But these are women who are seen by the physiotherapist approximately 24 hours post-surgery, so that they rarely develop these symptoms.”

Not all women have access to appropriate physiotherapy or even essential education about avoiding complications following surgery. In South Africa the incidence of breast cancer is one in 29 women; simple maths indicates that there are probably not enough resources to ensure that each patient gets the best advice and therapy, in public or even private healthcare.

But if their cancer is detected at the right stage — the stage where removal of axillary nodes is unnecessary — the vast majority of women could avoid lymphoedema. These research results provide a powerful rationale for an aggressive breast cancer screening campaign: the more patients are diagnosed early, the less invasive surgery has to be done and the less painful complications there are, relieving some of the burden of cost from the public service, which should be factored into policy considerations.

Solid evidence
The evidence for changing practice in this way does not hang on just one study. This research builds on similar previous Swiss research published in the Annals of Surgical Oncology in 2009, followed by research published in the Lancet in October last year (the latter looked at women whose sentinel nodes showed no signs of cancer). In both cases, survival rates at about five years were almost equal.

“These studies are important to clinicians — they provide evidence for the approach of no longer doing aggressive surgery but rather of embracing the concept of less invasive axillary surgery,” said Benn.

“It’s important that we question why we do things the way we do; we should continually challenge our approach to treatment and ask questions. Many of us have expected these results.

“We hope that patients will demand access to information about better treatment regimes so that they can have better outcomes.”