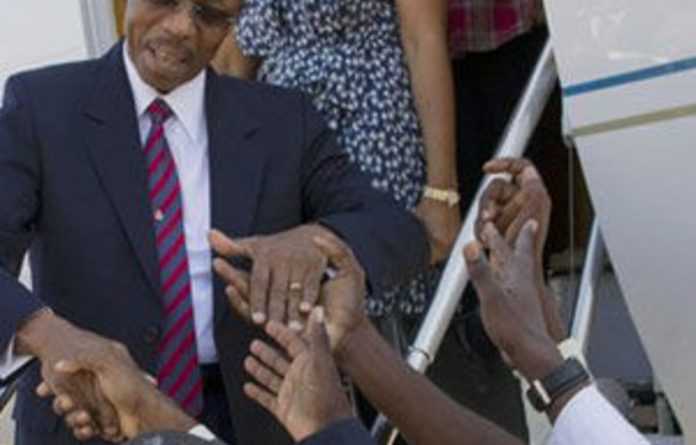 Jean-Bertrand Aristide, the pastor-turned-president last seen in his native Haiti making a rapid, undignified exit seven years ago, has returned home to a rapturous welcome, injecting another variable into a febrile election atmosphere 48 hours before a drawn-out presidential race climaxes.

Aristide, the only Haitian leader to have been forced from office twice, offered an exotic mix of poetry and gratitude to the hundreds of supporters who feted him at the airport — and took a sideswipe at the troubled electoral process.

The atmosphere at the airport was charged. It was here after all that Aristide was bundled on to a plane in February 2004, leaving behind a rebellion in full cry and a power vacuum. Since then the country has endured landslides, political stasis and enduring poverty — all compounded by last year’s earthquake which killed more than 300 000 people.

For many Haitians, the former populist president who helped oust the Duvalier regime is still admired as a champion of the poor. His repatriation in defiance of US efforts to keep him away until Sunday’s election has run its course is seen by many as a restitution of dignity. “President Aristide is a strong leader who doesn’t take orders from a superpower such as the United States,” said Johnny Mazart (36) a carpenter. “That’s why they ousted him, because he listened to the Haitian people, not foreigners,” he told Reuters.

Journalists trampled over barriers to reposition themselves to film the former president as he descended from a long-range private jet accompanied by his family and black rights activist Danny Glover. His wife, Mildred, had tears of joy in her eyes as her daughters buttressed her down the steps on to the Haitian tarmac.

Aristide thanked the government of South Africa, which had hosted him, and the friends who helped him return. He switched between Haitian Creole, French, English, isiZulu and Spanish, and onlookers cheered at his linguistic and geological references and metaphors about Haiti’s plight and his repatriation.

“You can cut off our feet but not our roots that go all the way back to Africa … This country needs education with dignity without social exclusion … The exclusion of [his party] Lavalas is exclusion of the majority. The solution is inclusion.”

In the Cité Soleil slum, crowds of people were reported to be chanting for the annulment of Sunday’s election, which pits the popular musician Michel “Sweet Micky” Martelly and the former first lady Mirlande Manigat. In Solino, another neighbourhood where Aristide commanded much support, the streets were calm but people were unsure sure how to react to the arrival of such a divisive figure on the last day of campaigning.

“He is not here to interrupt the elections,” said Wesly Desalan. “He is here to help Haitians get out of the current political crisis.”

Later, attention turned to Aristide’s house in Tabarre where thousands had gathered and, as at the airport, disregarded the barriers to flood the yard. By contrast, the other towering figure who returned in January, Jean-Claude Duvalier, has been arrested and charged with corruption. Most people, even those who revile Aristide, think he has every right to be back, particularly as Duvalier’s return was tolerated.

In front of the crumbled national palace everything was unusually quiet. Saturday is the last day of campaigning before Sunday’s run-off vote, and one of the candidates’ campaign managers said more than 50,000 people had gathered there on Friday night for a concert by Wyclef Jean, Busta Rhymes, Black Alex and Ti Vice, a group of Haitian musicians endorsing Martelly. – guardian.co.uk