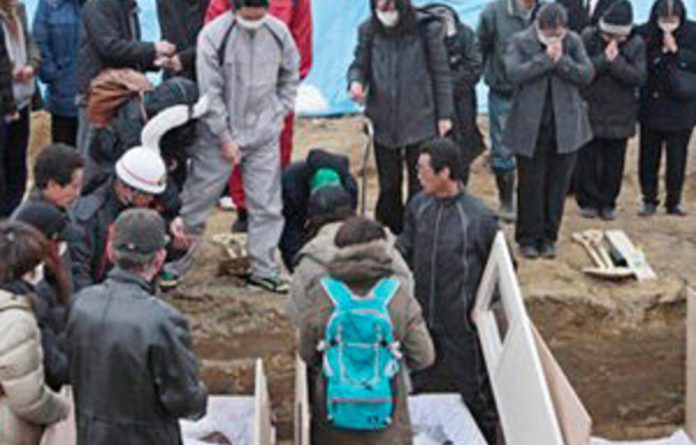 The sheer numbers in the world’s costliest natural disaster — estimated at $250-billion — remain staggering. There are about 21 000 dead or missing, 319 000 people evacuated, 2 131 makeshift shelters, 2,4-million people without access to water and 221 000 households without power.

“There is some improvement in terms of logistics and in getting food and other supplies,” said Francis Markus of the International Federation of Red Cross and Red Crescent Societies delegation in Tokyo.

“But it is still very difficult.”

Rain grounded helicopters loaded with supplies this week, forcing authorities to rely on roads and delaying aid, said the UN Office for the Coordination of Humanitarian Affairs. Access to water “remains a concern” in 11 prefectures, it added.

Makeshift evacuation centres, packed with hundreds of shell-shocked survivors sleeping side-by-side for more than a week, are orderly but clearly deteriorating in some regions, beset by cases of diarrhea, influenza, stress and fatigue.

“The only thing we can do is stick it out,” said Takeshi Murakami (67) in Kesennuma in devastated Miyagi prefecture whose governor reckons as many as 15 000 people were killed by the March 11 quake and tsunami.

Murakami is staying in a school gym with about 450 others, down from a peak of about 800 people last week. Hastily gathered possessions are folded in tidy bundles next to sleeping bags. Most escaped only with the clothes on their back. Few have bathed since the 9,0 tremor.

Sleep at the shelter is often interrupted by the screams of an Alzheimer sufferer during the night. Evacuees use portable toilets outside the gym. In one section, the elderly lie on mats on the wooden floor, receiving intravenous drips.

Telephone companies provide free services at the gym, where an entire wall is jammed with notices posted by people seeking help to find the missing. Without television, there is little to do but talk, grieve and wait. Many huddle around heaters.

“There is no privacy but you have to get used to it,” said Keiichi Kato (49) who ran a children’s clothing store before it was obliterated, replaced by four washed up fishing trawlers.

Slow progress
There is progress. The Tohoku Expressway connecting Tokyo with quake-hit areas has re-opened to trucks. In Rikuzentakata, where more than 80%of the estimated 8 000 households were swept away, temporary homes are now being built.

About 5,5-million meals, 380 000 blankets and 90 000 diapers had been distributed across the tsunami-ravaged region as of Monday, according to the UN Office for the Coordination of Humanitarian Affairs.

But it was unclear how many people these had reached.

An official at the Disaster Relief Headquarters in northern Iwate prefecture, where 45 687 people were living in evacuation centres as of Monday, said a shortage of fuel was preventing aid from reaching hard-hit remote areas.

“Relief goods are being sent to evacuation centres but because of a shortage of fuel there’s certainly not enough and there are places that goods are not reaching,” he said.

“There are many places without electricity,” he added. “Some people [in evacuation centres] are becoming ill.”

The UN humanitarian office reported trouble caring for the disabled, especially the hearing impaired who in high-tech Japan rely on emails sent by cellphone to communicate. Much of the cellphone network remains down.

“The psychological toll on those who survived the disaster and are now in evacuation centres is becoming more apparent. Many evacuees, including children, are suffering from post-traumatic stress disorders,” the UN agency said.

It is unclear how long people will stay in the shelters. An exasperated Yoshihiro Murai, governor of Miyagi, last week asked earthquake and tsunami victims to leave the prefecture due to a shortage in housing. Some are quietly heeding his call.

About 10 000 people, on average, are leaving evacuation centres a day, according to UN data. The Red Cross’s Markus said many are heading to homes of people not affected by the disaster who have offered to take in survivors.

But some shelters remain over-crowded. At a sports arena in Minamisanriku, a town in Miyagi prefecture that lost about half its population, survivors are sprawled out on blankets on the floor, separated by knee-high cardboard walls.

About 1 500 evacuees are staying there. About 20 left when relatives managed to buy fuel and pick them up. Staff say the centre exceeds capacity. Nearby evacuation centres are also crowded.

Many wear surgical masks and wipe their hands regularly with alcohol to prevent the spread of influenza. The elderly sit dazed on benches. Teenagers crowd a booth to recharge cellphones. On standby are ambulances and a van with a dentist.

“I can’t think of anything other than electricity, water and gas now,” said Takuro Endo (18) as he searches names on a wall listing those in other evacuation centres. “It could take 10 years for the town to recover.”