Slowly does it for the Proteas 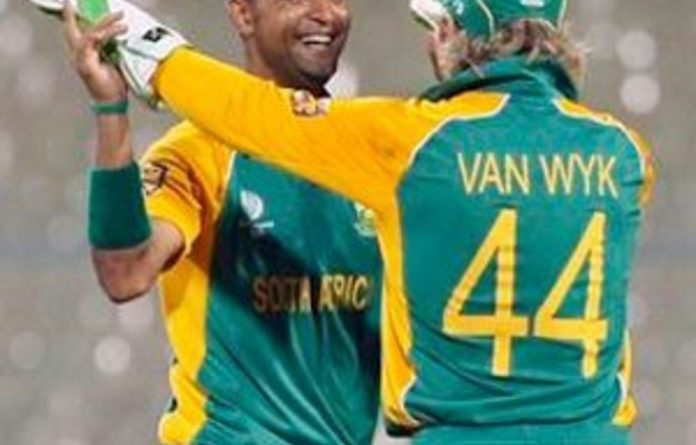 South Africa have two bowlers among the top 10 leading wicket takers at the World Cup — and neither of them is Morne Morkel or Dale Steyn.

Morkel is number four in the International Cricket Council (ICC) bowling rankings in the one-day format, two places ahead of fellow paceman Steyn, but it is spinners Robin Peterson, with 14 wickets, and Imran Tahir with 12 who have led the way in South Africa’s progress to the quarterfinals.

Off-spinner Johan Botha has played what he described on Tuesday as a “holding role” and his input proved crucial in the narrow win over India when he was brought on midway through the innings to help slow the home side’s explosive start.

India were all out for less than 300 and Botha ended with figures of 0-39 from nine overs.

“Our three spinners are a lot different from each other,” Botha said. “Immy’s [Tahir] a very attacking spinner, he’s got us a lot of wickets in this tournament, so has Robin.

“I’m probably doing a bit more of a holding role and controlling the game from one side and they’ve been taking the wickets which is really good for us. Then we have world-class seamers like we know who have done their job so far in the tournament. All in all, we’ve got a really good bowling attack.”

Botha, who started his career as a medium-pacer before switching to offspin in 2004, opened the bowling for the Proteas in Saturday’s comprehensive defeat of Bangladesh, while Peterson took the role against England.

Tactic to save overs
It is a tactic which has also been used by several other teams, who have chosen to save overs for their quicker bowlers for when the ball is older and could reverse swing. The conditions in the subcontinent typically tend to favor the spinners.

“Our seamers obviously in South Africa dominate, they’re world class,” Botha said. “But these other two guys, Immy and Robin, have got a lot of wickets and that’s great for our team to get wickets in the middle period.”

South Africa’s ability to play spin could also be crucial against New Zealand on Friday, with Daniel Vettori expected to return to the opposition lineup after missing two matches with injury.

“Daniel Vettori is a big player for them, a world class bowler,” Botha said. “We respect him highly and I’m sure he’ll try anything to play in this game. I think it’ll be a good contest.

“Our batters have played spin really well in this tournament and I think they’re looking forward to him playing.” — Sapa-AP