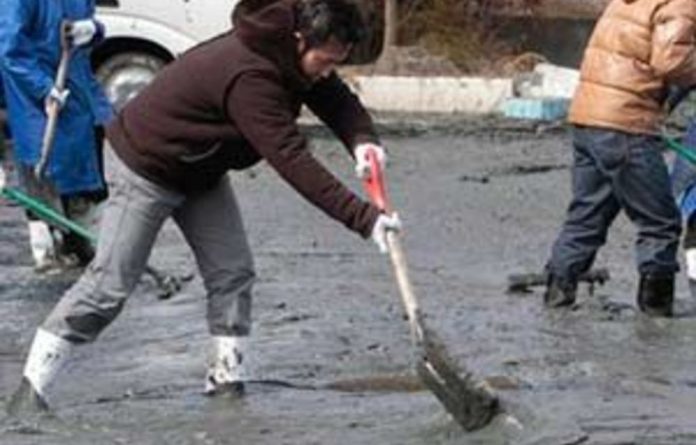 Smoke and steam rose from two of the most threatening reactors at Japan’s quake-crippled nuclear plant on Tuesday, suggesting the battle to avert a disastrous meltdown and stop the spread of radiation was far from won.

The world’s worst nuclear crisis in 25 years playing out 240km north of Tokyo was triggered by a huge earthquake and tsunami on March 11 that left at least 21 000 people dead or missing.

Technicians working inside an evacuation zone around the stricken Fukushima Daiichi plant on Japan’s northeast Pacific coast have attached power cables to all six reactors and started a pump at one of them to cool overheating nuclear fuel rods.

But Kyodo news agency said steam appeared to be rising from reactor No. 2 and white haze was detected above reactor No. 3. There have been several blasts of steam from the reactors during the crisis, which experts say probably released a small amount of radioactive particles.

Plant operator Tokyo Electric Power (Tepco) said later the smoke had turned to steam and it was deemed safe to continue work in bringing the plant under control.

Away from the plant, mounting evidence of radiation in vegetables, water and milk stirred concerns among Japanese and abroad despite officials’ assurances that the levels were not dangerous.

Tepco said radiation was found in the Pacific Ocean nearby , not surprising given rain and the hosing of reactors with seawater. Some experts said it was unclear where the used seawater was ultimately being disposed.

Radioactive iodine in the sea samples was 126,7 times the allowed limit, while caesium was 24,8 times over, Kyodo said. That still posed no immediate danger, Tepco said.

“It would have to be drunk for a whole year in order to accumulate to one millisievert,” a Tepco official said, referring to the standard radiation measurement unit. People are generally exposed to about 1 to 10 millisieverts each year from background radiation caused by substances in the air and soil.

Japan has urged some residents near the plant to stop drinking tap water after high levels of radioactive iodine were detected. It has also stopped shipments of milk, spinach and another vegetable called kakina from the area.

Experts say readings are much lower than around Chernobyl after the 1986 accident in Ukraine.

The World Health Organisation (WHO) said the radiation impact was more serious than first thought, when it was expected to be limited to 20-30 km from the plant.

However, WHO regional spokesperson Peter Cordingley told Reuters there was no evidence of contaminated food reaching other countries.

Japan is a net importer of food but it also exports fruit, vegetables, dairy products and seafood, with its biggest markets in Hong Kong, China and the United States.

Despite the concerns about elevated radiation readings, Japan said there was no need to extend a 20km evacuation zone around the plant.

More than 170 000 people have been moved out of the zone since the 9,0 magnitude earthquake and 10-metre tsunami smashed into the nuclear complex.

“At the moment, there is no need to expand the evacuation area,” Chief Cabinet Secretary Yukio Edano told a briefing.

Latest available readings from an area 10km outside the evacuation zone show a level of 110 microsieverts per hour in the air, well below a level that would cause health risks but much higher than normal background levels.

“We will have to monitor these levels carefully, but this of course does not cause harm to anyone’s immediate health, and will not damage anyone’s health in the future,” Edano said.

Plant situation may be stabilising
Experts have offered a glimmer of hope in Japan’s darkest time since World War Two, saying the situation appeared to be improving at the Fukushima plant, especially after more advances than setbacks in the past 48 hours.

“Things are beginning to trend in the right direction. Tepco will need to get electrical power back on line to all six reactors and they will have to make sure that components are working,” said Mark Prelas, director of research for the Nuclear Science and Engineering Institute at the University of Missouri.

The priority on Tuesday will be patching up the No. 2 reactor so electricity, already connected, can be turned on. By Tuesday morning, reactor No. 1 was receiving power and No. 5 had both electricity and working cooling pumps.

Toshiba said it had sent 100 engineers to help.

The US Nuclear Regulatory Commission said the crisis appeared close to stabilising.

The prospects of a nuclear meltdown in the world’s third-biggest economy — and its key position in global supply chains, especially for the automobile and technology sectors — rattled investors worldwide last week and prompted rare joint currency intervention by the G7 group of rich nations.

Tokyo stocks were up at more than 3%in the early afternoon after a holiday on Monday, following a rise in global stocks as progress in the nuclear crisis revived risk appetite. The yen slid on speculation of more G7 intervention.

Damage from the earthquake and tsunami is estimated at $250-billion, making it the world’s costliest natural disaster.

Devastated north
The official death toll exceeded 9 000, Kyodo cited police as saying, but with 12 654 reported missing it is certain to rise.

Police say more than 15 000 people probably died in Miyagi prefecture, one of four that took the brunt of the tsunami.

The quake and tsunami obliterated towns, which are now wastelands of mud and debris, leaving more than 350 000 people homeless.

Japanese are famed for resilience, though, and there was none of the chaos or looting that major disasters often spark.

In one devastated northern town, Rikuzentakata, rebuilding has begun. Steel structures, with walls and wood floors, have been erected at a hilltop school, to provide temporary housing.

There is widespread admiration for the workers facing high radiation dosages on the front line at Fukushima. Some have wept with tension and relief after finishing their shifts. — Reuters