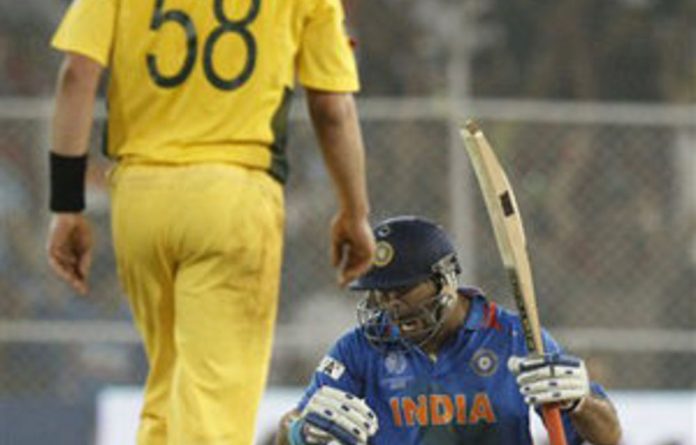 India sparked jubilant celebrations among its billion plus fans after ending Australia’s remarkable 12-year reign as World Cup champions with a thrilling five-wicket win in the quarter-finals on Thursday.

Chasing 261 for victory, India fumbled and faltered but half-centuries from Sachin Tendulkar (53), Gautam Gambhir (50) and Yuvraj Singh (57 not out) eventually helped them to overwhelm the target with 14 balls to spare and set up a mouthwatering semifinal with Pakistan. Opting to bat first, Australia rode skipper Ricky Ponting’s 30th ODI century to post 260-6 which seemed a strong total at the Sardar Patel Stadium’s low, spinning track.

Batting first, he and Brad Haddin (53) then ensured the total exceeded his expectations despite India using seven bowlers against them, including Tendulkar who last rolled his bowling arm back in 2009 against the same opponents.

Opener Shane Watson (25) fell after a sluggish start but the Haddin-Ponting partnership yielded 70 brisk runs to steady the boat.

Yuvraj was lurking around and underlined his worth as a part-time bowler by dismissing Haddin and Michael Clarke.

Mike Hussey’s stay was cut short by Zaheer but his brother David (38 not out) played a cameo in Ponting’s company to keep the scoreboard ticking.

Tendulkar was his fluent self and seemed cruising to his 100th international century but the otherwise erratic Shaun Tait managed to induce an edge that sailed into Haddin’s gloves and a deathly silence descended at the 48 000 seater stadium.

Gambhir had just reached his 24th fifty when he ran himself out after an almighty mix-up with Yuvraj, having survived two such comical communication breakdowns immediately before the dismissal.

Yuvraj, however, kept his cool and batted till end and saw India through by smashing the winning boundary. – Reuters