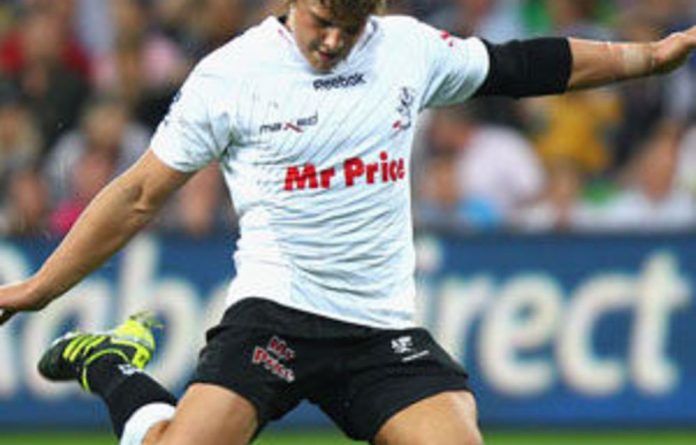 The homeless Canterbury Crusaders say losing is not an option this weekend as they take their roadshow and the Super 15 into new territory when they play the Coastal Sharks in London.

The historic encounter — the first Super Rugby game to be played outside New Zealand, Australia and South Africa — pits the second and third ranked sides against each other in the key match of the sixth round at 6pm South African time on Sunday.

Elsewhere, the table-topping Western Stormers host the Western Force and defending champions the Northern Bulls will look to get their season back on track against the Golden Lions.

The leading Australian side Queensland Reds will test whether the Central Cheetahs are one-win wonders after they upset the NSW Waratahs last week.

But the telling match will be at Twickenham, the temporary base of the itinerant Crusaders whose home ground in Christchurch is out of use for the year after being severely damaged in the devastating February 22 earthquake.

The aim is to boost the Crusaders’ coffers by playing the Sharks in Britain, home to 1,25-million expat New Zealanders and South Africans, but coach Todd Blackadder insists the focus is on extending their winning streak.

“We are not going to do anything different than what we would ordinarily do … this is all about the performance against the Sharks,” said Blackadder whose side have been in scintillating form since they resumed playing after the quake.

‘Massive game’
In three games they have amassed 129 points including 15 tries while conceding only 41 points and five tries.

Blackadder said he is unlikely to tinker with the make-up of his All Blacks-laden side, while the Sharks will have to make do without their leading points scorer Patrick Lambie who has been ruled out with a finger injury.

Replacement flyhalf Jacques-Louis Potgieter is the only change to the run-on side that lost to the Waikato Chiefs last week — their first loss of the season.

The Stormers, a point clear of the Sharks and three points ahead of the Crusaders, are at home in Cape Town to the Western Force who would be well advised to keep their penalty count to a minimum.

The South African unit has the tightest defence in the competition and has maintained an unbeaten record by relying on the boot of fly-half Peter Grant who has contributed 62 of their 81 points.

The Northern Bulls, who have suffered back-to-back defeats to the Otago Highlanders and Stormers, have issued a warning to the one-win Lions whom they play on Saturday.

“I can’t remember when last the Bulls have lost two in a row at home and there is an urgency to make sure it never happens again,” said captain Victor Matfield, describing it as a “massive game” for his side.

Rivalry
The Cheetahs, who last week upset the Waratahs, have the Reds in their sights as they continue their Australasian campaign.

Reds captain James Horwill returns from injury in the only change to the Queensland side which notched half-a-century of points against the Rebels last week.

The Waratahs, meanwhile, have an Australian derby match up against the ACT Brumbies who come back after a bye following a 50-point hiding by the Crusaders.

The Auckland Blues, who have a habit of running hot and cold, face their nearest neighbours the Waikato Chiefs who are on a high after beating the Stormers last week.

Of interest will be the form of rival flyhalves Stephen Brett for the Blues and Mike Delaney for the Chiefs, the last standing potential back ups in the All Blacks for Dan Carter.

Of the other contenders, Stephen Donald is out injured, Colin Slade has been sidelined since the start of the year with a pre-season injury and Aaron Cruden can no longer make the Wellington Hurricanes starting XV.

The Hurricanes open this weekend’s matches on Friday in Melbourne where they play competition newcomers the Rebels. — Sapa-AFP