Turning the tide on TB 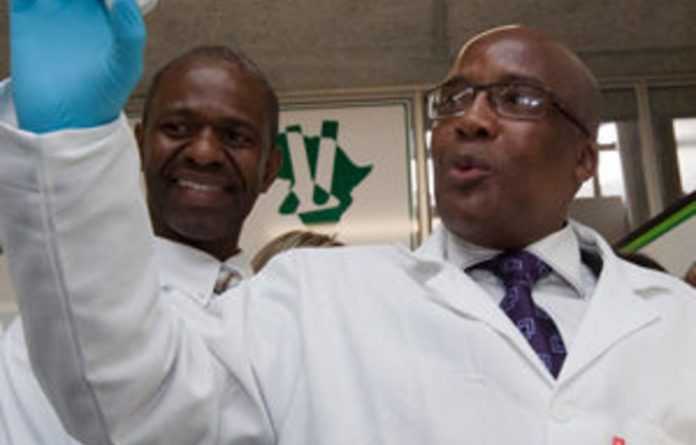 There are only five GeneXpert machines outside the United States and a majority of them can be found in Europe. The fifth one, now in South Africa, is the only one dedicated to TB testing in the world.

The GeneXpert Infinity 48, manufactured by US company Cepheid, is an automated molecular analysis machine that produces accurate results quickly, with minimal risk of contamination. The GeneXpert will be used to test sputum for tuberculosis and was donated to the hospital by the US Agency for International Development (USAid), a government agency providing economic and humanitarian assistance.

The GeneXpert can detect TB and multi-drug resistant TB (MDR-TB) in two hours.

Motsoaledi said it used to take between three and five months to know that someone was infected with MDR-TB. “In essence, we can label this technology as a ‘laboratory in a cartridge’ because all the processes of diagnosing TB happen in a small cartridge in a period of 120 minutes,” he said.

Motsoaledi said they chosen to roll-out the technology in eThekwini in KwaZulu-Natal first because with about 45 000 infections, it had the highest incidence rate in the country.

The GeneXpert machine can conduct up to 48 tests simultaneously and a total of 200 in eight hours. The department has also purchased nine GeneXpert 16 machines, which will be put into operation in areas with a high incidence rate, as well as 20 portable GeneXpert 4 machines which will be used for testing in communities.

Fifty-four lab technicians have been trained to use the machines, which Motsoaledi described as being very simple to operate.

Motsoaledi said to date, R53-million had been spent on the equipment.

He said the the Global Fund to Fight Aids, Tuberculosis and Malaria had donated about R100-million for the building of hospitals to treat multi-drug resistant TB in the country. “Those facilities have been completed and in a few days we will officially open the Catherine Booth Hospital,” said Motsoaledi.

Patients would be required to stay in hospital for about 18 months.

The Catherine Booth Hospital in Amathikulu, Durban, is undergoing the final phase of the construction of the MDR-TB unit which will be able to treat 40 male and female patients.

Getting treatment to the people
Bruce Margot, coordinator of the TB control programme in KwaZulu-Natal, said the hospital would serve the residents in the Uthungulu district and was part of their efforts to “get treatment units closer to where the people are”.

Unlike most hospitals, the sputum booths — where patients are required to produce a sample to test the progress of their treatment — are situated outside the hospital building to ensure maximum ventilation.

Geoff Abbott of the Council for Scientific and Industrial Research’s Built Environment, said they had prioritised the reduction of risk from patient-to-patient and patient-to-staff infection.

The well-ventilated hospital — which includes roof panels that open — would help to reduce the number of infectious particles in the air, said Abbott.

The new hospital will also include a purpose-built audio room for patients, as deafness is a side-effect of MDR-TB medication. A recreation block has also been built for patients.

The department will also be following a “case-finding strategy” which will be rolled out throughout the country. Teams of health professionals will conduct house-to-house visits and test residents for both HIV/Aids and TB using GeneXpert 4 mahines.

“Teams will check immunisation levels of children under the age of five as well as if pregnant women are undergoing antenatal care,” said Motsoaledi, adding that to date a total of 18 000 families had been visited around the country and 60 000 individuals screened for TB.

“Doctors and nurses must get out of the hospitals and go out to where the people are,” said Motsoaledi.

With household visits in eThekwini, smartphones and Google Maps would be used to create a database, allowing health workers to monitor progress.