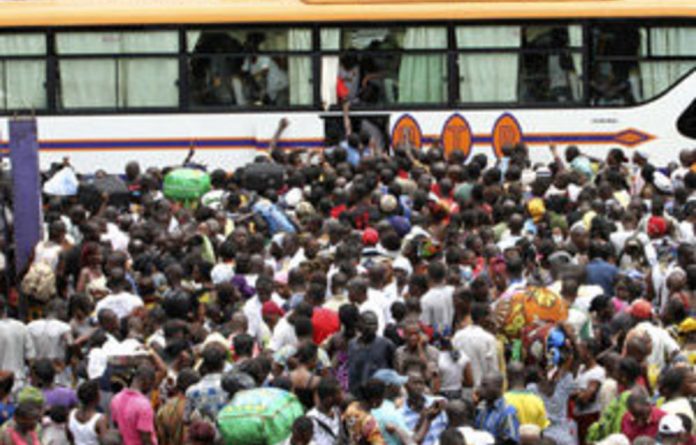 At the beginning of the crisis there was talk of invading Côte d’Ivoire and installing Alassane Ouattara, who won the election, as president. What has become of that?

There was no unanimous stance on which country should lead the military offensive and at what cost. Nigeria said that it would go ahead only if the United Nations gave its full backing. Other countries in the region worried that a direct confrontation with the Ivorian army would endanger the lives of their citizens living in Côte d’Ivoire.

The preferred course of action today is to isolate and asphyxiate Gbagbo’s regime. The international community has imposed sanctions on Côte d’Ivoire. Most of the banks are closed. There is a shortage of basic foods and medicines, gas is scarce and distribution of petrol is disrupted. Inflation is high. Exportation of cocoa, the country’s main revenue as the world’s biggest producer, is banned on international markets. The middle class and ordinary citizens are the worst affected.

Some portray Gbabgo as anti-French and anticolonial and ascribe the international tide against him to his leftist stance.
The Gbagbo camp claims that it wants to “liberate” Côte d’Ivoire from neo-colonialism, to put an end to old colonial ties by trading with emerging powers such as China, South Africa, India and Brazil. They also accuse France of aiding the 2002 rebellion that split Côte d’Ivoire into two. However, this nationalistic discourse doesn’t translate itself on the ground. Gbagbo’s regime is highly corrupt and has mismanaged the Ivorian economy for more than 10 years.

Gbagbo claims to be the victim of vote-rigging, especially in the north …
This is at the heart of the post-electoral crisis and opinions differ strongly. But one thing is certain: the elections took place while there was a physical and political north-south separation. Army chiefs from the former northern rebellion refused to really disarm and made the redeployment of the national administration unoperational.

They have divided the northern region into territories under their command. They tap into the lucrative diamond mines and cocoa crop further down in the west. The border with Burkina Faso being very porous, there is all sorts of traffic along this route. It was not a favourable environment for a transparent electoral process.

What is the role of the UN?
Its role is to protect citizens and to search actively for a peaceful resolution. There are about 9 000 troops stationed in the country. Unfortunately, the UN mandate is inadequate and is being interpreted by force commanders very cautiously. The peacekeepers are avoiding direct confrontation with the pro-Gbagbo army at all costs. Moreover, they seem powerless to stop the escalation of violence.

Young people are being armed by the Gbagbo camp. Human rights are being violated and massacres are taking place. There are about 500 000 internally displaced people and refugees are fleeing into neighbouring countries. This is turning more and more into a Liberia scenario. Meanwhile, the UN is protecting Ouattara and his entourage, who have been holed up in Abidjan’s Golf Hotel since the crisis erupted.

Some commentators see the election as the result of deep-seated structural fissures in Cote d’ Ivoire.
Côte d’Ivoire went to the elections as a profoundly divided country, along geographical, religious and ethnic lines. The disarmament of the former rebels was not effective. Therefore, structural problems needed to be addressed before going ahead.

Apart from its role via instruments in the African Union and the initial mediation role that former president Thabo Mbeki played, what can South Africa do?
South Africa has shown a lack of consistency in its political stance. Thabo Mbeki was taken in by Gbabgo’s rhetorical talk and did not properly assess the danger that he represented for peace in Côte d’Ivoire and in the region.

As for President [Jacob] Zuma, he was initially ready to hear Gbagbo’s side, but after his official visit to France and meeting with [Nicolas] Sarkozy he endorsed the AU position. The problem is after nearly four months of fighting, this approach is not ­producing any positive results — on the contrary, the situation is getting worse. The AU, Ecowas [Economic Community of West ­African States] and the UN must act decisively. First they must obtain an immediate ceasefire from both sides and Gbagbo must step down immediately.

But at the same time the international community has to face reality in the sense that Ouattara must also renounce power because he is such a divisive figure. This must be done for the superior interest of the country. The Ivorian Constitution allows for an interim president in case of a vacancy.

Alternatively, an internal Ivorian mediation can identify an interim president whose mission will be to steer the country back to stability, but who will not be allowed to seek office subsequently.