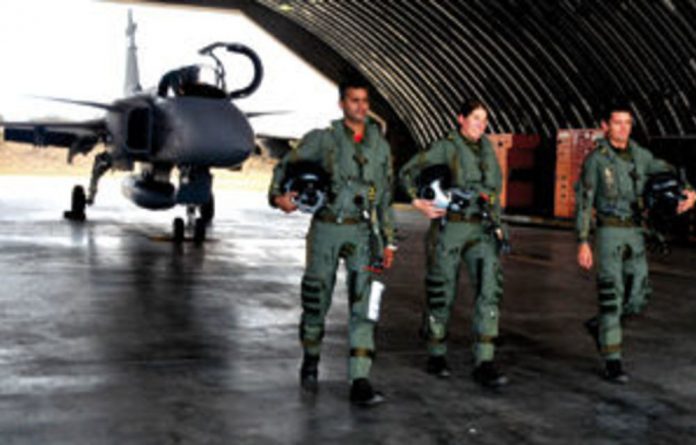 The South African National Defence Force’s efforts to transform the military is bearing fruit, with the country producing the world’s first female pilot of the frontline fighter jet, the Gripen.

The South African Air Force, a division of the SANDF, made aviation history when Major Catherine Labuschagne became the world’s first female Gripen pilot. The SANDF itself is a leader on the continent in terms of gender representation in the army, with 37% of its soldiers being women. Major Catherine Labuschagne is not only the first in South Africa, but also the only female pilot in the world to fly solo in a Gripen.

At only 31, Labuschagne flew into military history books at a time when women across Africa are pressing to be treated the same way as their male counterparts in the military. “It is quite a big thing for me because it made history. It was also rewarding because I have been in the frontline since 2003. It’s been a long road,” said Labuschagne in an interview with the Mail & Guardian this week.

Labuschagne, code-named Siren, was among the first group of pilots trained ‘in-house” by the SAAF, giving credit to the skills transfer process within the SAAF. The initial six Gripen pilots were trained at Saab, the Swedish aerospace and defence company that manufactured the aircraft. Besides the SAAF, the Gripen is also in service with the Swedish Air Force, the Czech Air Force, the Hungarian Air Force and will soon be used by the Royal Thai Air Force.

Labuschagne boasted 1 900 flying hours by October last year, of which 1 000 had been in military jets. She previously flew an Impala and the Hawk lead-in-fighter in preparation for the transition to South Africa’s frontline fighter. It was ‘tough” training, she admits.

“In addition to the Impala and the Hawk, there were a lot of courses that one needed to complete. I didn’t just join the line and start flying the Gripen because I’m a woman.” Women make up 37% of South African soldiers, but Minister of Defence and Military Veterans Lindiwe Sisulu plans to increase the number. The defence industry will benefit by having more women, she said.

“They care and they pay attention to detail. More women in the defence industry will make a better world,” she said. Upon taking office, Sisulu identified the development of women in the army as one of many aspects needing attention.

“You will not believe that there was a time when women could not qualify to train as pilots and in many other areas in the SANDF because the infrastructure was not designed to accommodate them. “We need to improve our infrastructure to accommodate women. Our living conditions must also make it easy for women to adapt,” said Sisulu.

There have, however, been recognisable improvements. “We have made good strides as a country. In the South African Navy some of the best divers are women and in other fields we find that women excel,” the minister said. Only 5% of soldiers in the world are female, according to analysis by political analyst Anesu Makina, who is working in Pretoria and Kenya with Monica Juma from the Africa Policy Institute and the Africa Institute of South Africa.

Makina and Juma found that at 37% South Africa was “leading the pack” with the highest percentage of women in the army. The figure is higher than the regional average of about 10.5%. “Women soldiers have been restricted to prescribed gender roles such as nurses, cooks, secretaries and officers in personnel units,” said the two analysts.

Juma and Makina noted that Thandi Modise, the current deputy secretary general of the ANC who is also the premier of the North West, is but one of the “heroines” of the former Umkhonto weSizwe military veterans who were subjected to the same training as their male counterparts and were involved in combat in line with the ANC’s policy of nonsexism.

Zimbabwe’s vice-president, Joice Mujuru, was hailed as “a ferocious warrior” when she brought down a military helicopter with an AK-47 assault rifle. “Beyond the Southern African Development Community, Libya has drafted women into its army, with Colonel Muammar Gaddafi’s bodyguards being a 200-strong, female-only unit,” according to the analysis by Juma and Makina.

Major Catherine Labuschagne made her solo Gripen flight at the South African air base Makhado in Limpopo in October last year. She first made history in 2004 by flying in the rear seat of a two-seater Gripen at the Waterkloof airforce base during the Africa Aerospace and Defence (AAD) show.

Flying a Gripen requires a high level of fitness because of the speed at which it flies, a maximum of Mach 2 — twice the speed of sound, or about 2 400km/h. Pilots are also required to accumulate about 430 hours on the Hawk and pass several courses before they are allowed to sit behind the controls of a Gripen.

Labuschagne is one of several women serving as pilots in the SAAF, but the only one who has flown in the fighting line. Most of them are pilots in the helicopter transport line. She is the only female member of the SAAF’s elite 2 Squadron, which flies the single- and dual-seat Gripens.

She still undergoes training because flying fighter jets requires a continuous upgrading of skills. “It never really ends. Once you finish the conversion course, you move to operational training and you also upgrade your skills when new technology is introduced. It’s an ongoing process.”

On welcoming new recruits this year, Minister Sisulu said the military is the home for “the brave”. Labuschagne agreed: “Not only for pilots you need to be brave in any position you occupy.” She said her achievements were proof that opportunities were “pretty open” for women in the SANDF.

“There is quite a lot of support within the military for anyone who is willing to work hard.” But in her case, success came with sacrifices. She had to put on hold marriage and starting a family to concentrate of flying fighter jets.

Asked whether she was ready to fight in the frontline in a Gripen, Labuschagne said: “That’s what we are trained for. If you have doubts, you need to rethink your position.”