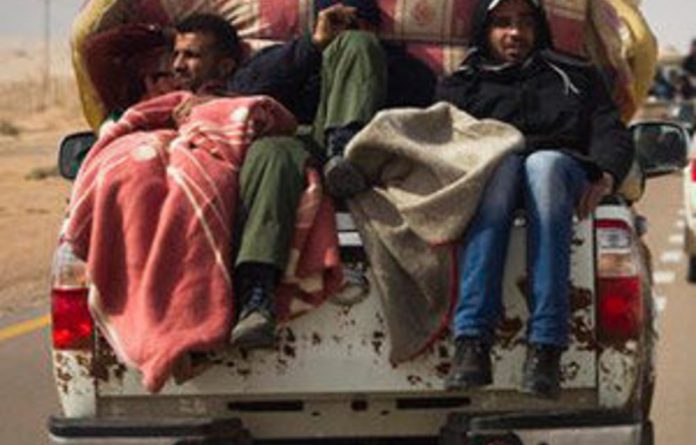 Libya’s ramshackle rebel army has pushed west to retake a series of towns from the forces of Muammar Gaddafi who are being pounded by Western air strikes.

Emboldened by the help of the air strikes, the rebels have rapidly reversed military losses in their five-week insurgency and regained control of all the main oil terminals in eastern Libya, as far as the town of Bin Jawad.

Rebels said on Sunday they now had their sights on the coastal town of Sirte, Gaddafi’s hometown and an important military base about 150km further along the coast. A Reuters reporter in Sirte heard four blasts on Sunday night. It was unclear if they were in the town or its outskirts.

The reporter also saw a convoy of 20 military vehicles including truck-mounted anti-aircraft guns leaving Sirte and moving westwards towards Tripoli, along with dozens of civilian cars carrying families and stuffed with personal belongings.

“We want to go to Sirte today. I don’t know if it will happen,” said 25-year-old rebel fighter Marjai Agouri as he waited with 100 others outside Bin Jawad with three multiple rocket launchers, six anti-aircraft guns and around a dozen pickup trucks mounted with machineguns.

The advance along Libya’s Mediterranean coast by a poorly armed and uncoordinated force of volunteer rebels suggested that Western strikes under a UN no-fly zone were shifting the battlefield dynamics dramatically, in the east at least.

The rebels are now back in control of the main oil terminals in the east — Es Sider, Ras Lanuf, Brega, Zueitina and Tobruk — while Gaddafi appears to be retrenching in the west.

Misrata fighting
Nearer the capital, Gaddafi’s forces fought rebels in the centre of Misrata, Libya’s third city, to try to consolidate his grip on western Libya. Misrata is the only western city still in rebel hands and has been sealed off for weeks.

A resident called Saadoun told Reuters by phone that at least eight people were killed and 24 wounded when Gaddafi’s forces fired mortar shells while attacking Misrata from the west in a day of fighting.

Pro-Gaddafi snipers were also pinning down rebel forces but late on Sunday night the fighting died down.

A rebel called Mohammed told Reuters by phone that pro-Gaddafi forces controlled “only one small area, a couple of streets” in the western part of the city.

Residents told Reuters they were having to use wells to get water and that medicines were in short supply.

At least six blasts resonated in Tripoli on Sunday night, followed by long bursts of anti-aircraft fire by Libyan forces. Libyan television said there had been air strikes on the “civilian and military areas” in the capital.

Libyan state TV broadcast what it said was live footage of Gaddafi in a car in his Tripoli compound where hundreds of supporters waved green flags and chanted slogans. Gaddafi could not be seen in the white car but the TV said he was in it.

On Sunday, Nato agreed to take full command of military operations in Libya after a week of heated negotiations, officials said, as Washington seeks to scale back its role in another Muslim country after operations in Iraq and Afghanistan.

Gates also raised the possibility that Gaddafi’s government could splinter and said an international conference in London on Tuesday would discuss political strategies to help bring an end to Gaddafi’s 41-year rule.

Libya accused Nato of “terrorising” and killing its people as part of a global plot to humiliate and weaken the North African country.

The government says Western-led air attacks have killed more than 100 civilians, a charge denied by the coalition which says it is protecting civilians from Gadaffi’s forces and targeting only military sites to enforce the no-fly zone.

“The terror people live in, the fear, the tension is everywhere. And these are civilians who are being terrorised every day,” said Mussa Ibrahim, a Libyan government spokesperson.

“We believe the unnecessary continuation of the air strikes is a plan to put the Libyan government in a weak negotiating position. Nato is prepared to kill people, destroy army training camps and army checkpoints and other locations.”

Ibrahim acknowledged that rebel forces in the east were advancing westwards but declined to give any details on the retreat of government troops.

He said three Libyan civilian sailors were killed in a coalition air strike on a fishing harbour in the city of Sirte on Saturday. – Reuters