It’s tough being a Proteas fan 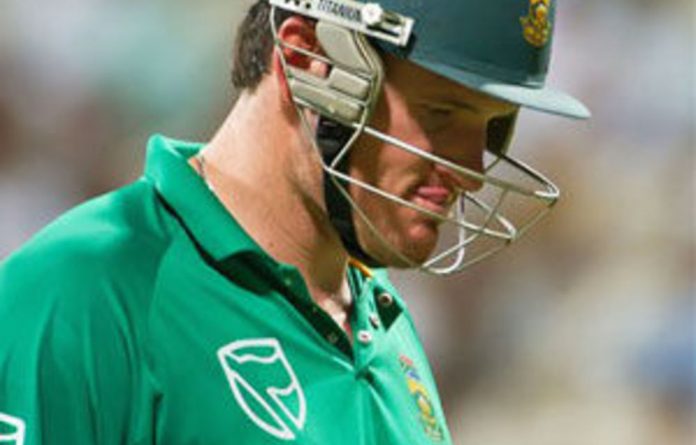 Yes, the Proteas were devastated when they lost to New Zealand in their Cricket World Cup quarterfinal clash.

And, donning our Proteas cricket shirts and with high hopes and #pureprotea hashtags, we were crushed along with them.

But this feeling of devastation didn’t last long. Anger emerged on the weekend and on Monday as Facebook and Twitter profiles engaged in lively debates about chokers, disappointments and bad captaincy.

While some of us were so shattered we couldn’t speak about it, other fans vented their frustrations on the net.

Business Day editor Peter Bruce said the team was not taught how to deal with pressure as individuals. “The batting part is an individual sport. It’s a test of character and technique, not team spirit. You can’t hide. It’s where we failed,” he said in his column. He’s not very forgiving in the column, but Proteas fans can understand why — South Africa have come up short in six world cups now. And it’s difficult for fans to accept, especially when our team can go to any other’s home ground and smash them around the field.

Strong feelings
A fan on Sports Leader was really livid. He sounded angry at himself for hoping there would be a win, and one can only sympathise with such strong feelings. Sounding like someone who’s been let down too many times, Greg Hurvitz titled the blog “This time the Proteas deserve no mercy.”

“Unfortunately no matter how this gets spun, SA cricket let me down, and from what I can gather from discussions with friends, family and on the social networks, they let a lot of people down,” he wrote. Much like many other South African fans, he sounded near-inconsolable.

Varsityview blogger Benjamin didn’t think the Proteas’ loss deserved any sympathy, but he did explain why he thought the team struggled. “Having no big match temperament is one cause for concern. Another would be the lack of big hitters.” Even after the disappointment, Benjamin said — albeit somewhat crestfallen — he still calls himself a Proteas fan, and called for new cricketers that can carry South Africa over the hurdle of choking.

Facebook also carried its fair share of rants and raves, a lot of which was aimed at captain Graeme Smith. One user put up a status reading, “Finally, Graeme Cracker is gone”. Another said, “Still love the Proteas. Heartbroken, but that’s the way it goes.”

And, in the worst way to break any Protea heart, we were told: “At least the Aussies lost to the home side.”

It’s not easy being a Proteas fan at the moment. But in true South African style we all keep hoping things will improve. Most supporters believe a new coach and captain will help steer the team in the right direction. Others are just jaded.

But, as one Tweep put it, “we’ll keep the green and gold in the cupboard until next time”.