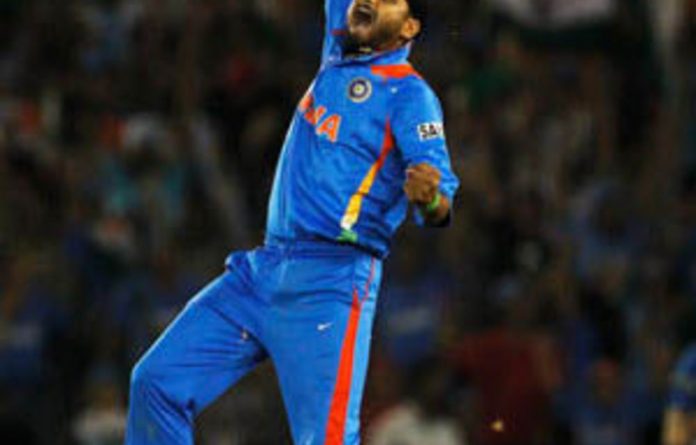 Thousands of delirious home fans brought the house down at the Mohali Stadium on Wednesday after India ended Pakistan’s World Cup dream with a 29-run win in an action-packed semifinal.

“We love you India,” screamed a group of college girls over Bollywood music blaring across the packed 30 000-seater Punjab Cricket Association stadium as noisy celebrations erupted throughout the country.

“It feels as if we have won the World Cup,” said 23-year-old Anuradha Biswal, wiping away tears of joy with her handkerchief.

“The match was so close, my heart missed a beat every time the Pakistani batsman hit a four or a six. But our team made us proud tonight.”

Chasing India’s 260-9, Pakistan folded up for 231 all out to hand India a final clash with Sri Lanka in Mumbai on Saturday.

Crowds at the venue broke into bhangra dancing, which is wildly popular in the northern Indian region around Mohali, and torn tickets flew like confetti over the heads of cheering supporters.

‘We have matured’
A handful of Pakistani fans who crossed the border to watch one of the biggest ever sporting clashes between the two nations wore a dejected look but were gracious in defeat.

“India deserved to win,” said Kashif Abbasi who travelled from Islamabad. “The good thing was that our team did not give up without a fight.”

The match had generated huge hype ever since the arch-rivals were drawn together for the semifinal, but the fierce contest out in the middle was in stark contrast to the bonhomie in the stands.

“The feeling is as if the bigger brother has won,” said Salma Riyaz, another Pakistani fan. “There was no angry exchange and tempers were never frayed despite the cauldron-like situation.

“It shows we have matured and take things in the right perspective.”

The audience, which included Bollywood stars such as Amir Khan, could not have asked for more drama with the result uncertain for much of the game.

“Despite the huge pressure on the players, they were very sporting throughout the match,” said Leena Khanna (26) kissing a flag pinned on her blue India T-shirt.

‘A great healer’
Both national anthems were respected by fans, though the overwhelmingly Indian crowd cheered every dropped catch by the Pakistanis who put down at least five chances during the Indian innings.

“To see them shake hands with players will remain etched in my memory,” said Shyam Shankar, an Indian software engineer who drove to Mohali from New Delhi.

“Cricket can be a great healer and help mend relations with our neighbours. We should play each other more often.”

“We lost because of Misbah, as he did not score well when it was most required,” angry fan Awais Shakir told Agence France-Presse on Islamabad’s main Jinnah Avenue as thousands of disappointed viewers were leaving screenings of the match.

“He just wasted time on the pitch.”

Fans in other Pakistani cities which ground to a halt for the game also criticised Misbah, who scored a lacklustre 56 from 76 balls. His slow play pushed the Pakistan towards defeat before the 50th over.

For schoolteacher Hazrat Ali, it was disappointing — but not the end of the game.

“Defeat and win is part of the game. Our team will win next time,” he said.

In Karachi, Pakistan’s largest city, engineer Mohammad Ali said: “It was a great contest all along and the day belonged to India. However Misbah and Younis Khan were very lazy.”

National holiday
The government had declared a half-day holiday in offices and schools to enable the cricket-mad population to enjoy the game.

Special prayers were offered in mosques and at homes, and people recited verses from the Koran, praying to Allah to guide the Pakistani team to victory.

By the evening all major roads in several Pakistani cities were gridlocked with cars, motorcycles and jubilant revellers, but the festive atmosphere turned tense as the Pakistani batting line began to fall before India.

Power cuts sparked protests by hundreds of angry spectators who blocked a main highway in Muzaffarabad, the capital of Pakistani Kashmir.

Motorists listened to the commentary on their car radios and shouted out the latest score to passers-by at a busy intersection in Islamabad.

Excitement reached fever pitch as shopkeepers flogged green T-shirts, caps and souvenirs, and networking sites Facebook and Twitter buzzed with comments on the wickets’ falls and player’s performance — and prayers for the squad.

Young people were seen wearing the green T-shirts of the Pakistani squad, their faces painted in the nation’s green and white, in the north-west city of Peshawar, while large national flags flew from buildings, houses and cars.

‘Long live the Pakistan team’
In the eastern city of Lahore, which borders with India, more than 20 000 Pakistanis thronged the Gaddafi stadium to witness the match on large screens. Entry was free and people formed long queues to get in.

In Karachi residents blocked many roads and set up huge screens to watch the live broadcast from the Indian town of Mohali.

By the end of the day, 30 people were brought to hospitals across Karachi after being wounded by stray bullets fired during the festivities, hospital officials said.

Even prison authorities in the city made special arrangements for inmates to watch the match and gave Indian team shirts to about 200 Indian prisoners.

In Rawalpindi, revellers danced to drums in a market and shouted “Long live the Pakistan team”, “We will win” and “Give your best, we are with you”.

Whenever an Indian wicket fell, people jumped and danced in jubilation and fired gunshots into the air.

In Islamabad people gathered around screens — including a huge screen mounted on the Stock Exchange building — letting out screams of excitement when a player hit a four or faced a fierce delivery.

Large crowds, including women and children, gathered at the lush green Fatima Jinnah park and waved Pakistani flags in support of their team, while elsewhere, the streets were deserted after midday. — Sapa-AFP