Food and love where bullets fly 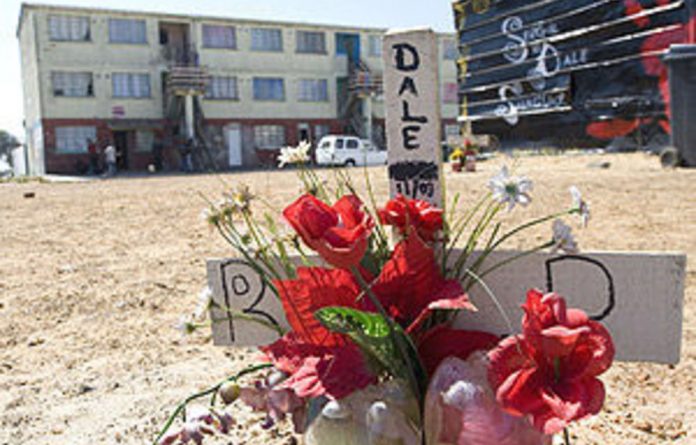 Forty-year-old Mervyn Manuel surveyed the desolate stretch of land across the road from his children’s primary school, which the locals call the “battlefield”.

“Lavender Hill is the coloured man’s dumping ground,” Manuel said angrily. “That is where the running gang battles mostly take place. Look at how still and eerie it is now. Just wait until the shooting starts up. Sometimes the children have to walk home past dead bodies.”

In a Cape Flats community where the Junky Funky Kids and the Corner Boys rule the streets, children like 12-year-old Tania Manuel and her 14-year-old brother, Vion, are frequently kept at home and restricted to the family shack when battles erupt between rival gangs. With an escalation of shootings last year, the children ended up missing so much school they were both kept back a grade this year, said Manuel. But it was better to have played it “safe rather than sorry”, he added. “They might be struggling at school, but they’re still alive.”

His petite daughter, Tania, looked down at the ground as she said quietly: “I feel unsafe all of the time, but I feel safer when I’m at school.” The community is mourning the deaths two weeks ago of two 15-year-old schoolchildren, Dale Jordaan and Shaquille Jacobs, and 21-year-old Sergio Domingo, who were caught in the crossfire during a gang shoot-out. Dried flower wreaths have been laid in their memory next to a kiosk where children sit huddled on a busy street corner. When they should be at school, children roam aimlessly around Lavender Hill, said locals.

While Manuel is also a victim of the extreme poverty, high unemployment and gangsterism afflicting his community, one blessing is that he can walk his children to and from school — he was booked off work because of disability. A former construction worker, he walks with a limp after an accident and considers himself lucky to have survived a recent mugging. He lifted his Bafana Bafana shirt to reveal fresh wounds on his chest.

“It’s unsafe for the children at home, just as it’s unsafe for them to go to school and when they walk home. It’s only quiet while they’re in class,” he said. “The gangs use them as buffers because it is hard for the police to catch them when all the children are outside.” With the community already in a crisis, the recent announcement by Albert Fritz, Western Cape minister of community safety, that 65 “notorious gang members” are due to be paroled in the province this year has sent shockwaves through this bleak landscape.

Release from prison
Locals want to know which gangsters are being released and when. But Fritz told the Mail & Guardian he simply could not provide answers. “I was warned by police that 65 notorious gang members were due to be paroled during the course of the year,” he said. “Last year we saw the effects of the release of just one gangster in Hanover Park, when several people lost their lives. I didn’t want to see a repeat — I had to speak out.”

Fritz arranged a meeting with Nosiviwe Noluthando Mapisa-Nqakula, the national correctional services minister, to discuss the issue on Tuesday but to his disappointment she postponed it. He said he would like to see the victims and their families fully consulted during the parole process. Sonwabo Mbananga, Mapisa-Nqakula’s spokesperson, said Fritz had been repeatedly asked to “share” the list of names of the 65 gang leaders up for parole, but had now conceded to officials “that such a list does not exist”.

Mbananga said parole was not a right but a privilege and strict criteria were in place that had to be met for any offender to qualify. However, Kevin Southgate, the Lavender Hill community policing forum chairperson, said he had heard from Steenberg police that one known gangster in the area had applied for parole. “I heard from the police they are going to turn down his application,” Southgate said.

Southgate, a businessman who grew up near Lavender Hill, said he could not understand why the authorities did not arrest the known leaders of the two gangs in the area. “It is outrageous. There seems to me no reason why they don’t deal with this devastating situation,” he said. “There just seems to be to be a lack of political will.

Living in fear
“When violence erupts in the area and people die, everybody wants to come out to Lavender Hill. But we fear it’s just being exploited by political parties. Nothing seems to change, year in, year out.” Rachel Claassen, the headmistress of Hillwood Primary, is charged with the safety of the 1 200 children who stream in and out of the prefabricated classrooms.

She said the teachers often felt unsafe coming to school during the shootings but they had no choice. “We’re all traumatised when the shooting starts. Some of the teachers do panic and they’re nervous — we all are,” she said, “but we carry on for the sake of the children.”

Claassen said she had organised a fun day to take the children’s minds off the recent killings, which had shaken the community to its core. “I don’t want the gangsters to keep us captive. So we must just keep going with school programmes all afternoon because the children are safer at school. That is where they learned to dance like this,” she said proudly as the children put on a show to roars of delight.

Claassen said she started running after-school programmes when gangsters killed a child at the school a few years ago. It was hard to keep the gangsterism out of the school but if she established that one of the child­ren was involved with a gang or gangster she would investigate it or call in the police. “The children know we have strict rules — no weapons and no drugs. We keep them so busy they don’t have any time for anything else. During the shootings the highest absenteeism we’ve had is 5%,” she said.

“The children know when they get here that they are going to get food and love.” Western Cape police spokesperson Captain Frederick Van Wyk said that since the recent flare up of gang violence in Lavender Hill, several operations have been conducted, which have resulted in suspects being arrested and firearms confiscated. Increased visibility by police officials in the area continues, he said.