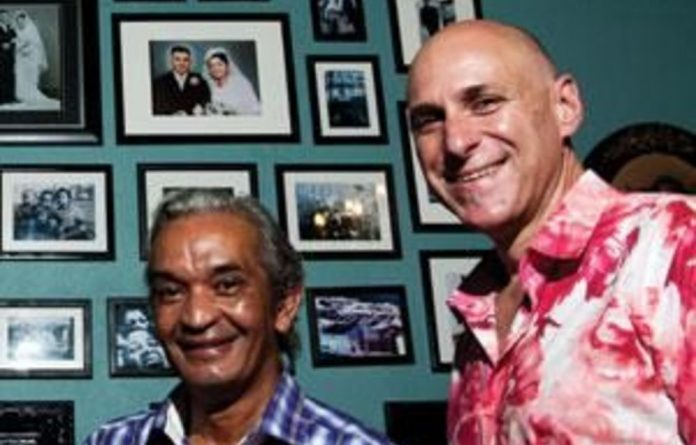 Let us now praise milk tart — or melktert, if you prefer.

Picture this: perched on a nest of puff pastry is a large slice of solid milk tart, not the wobbly stuff you usually get in restaurants and canteens and the homes of friends. On top is a generous sprinkling of cinnamon — so generous, you could call it a layer.

The world’s most wonderful milk tart is not the only good thing you find at District Six in Emmarentia. Try brilliant lime pickle among the generally excellent sambals and light and crunchy samoosas.

Recreating the mix
“It’s District Six,” says chef patron Clarence Swartland. “That is where people always think of Cape Malay and that’s not right.” There was a mix of people in District Six, he says. “Chinese, Indian, Italian”. He’s trying to recreate the mix — well, some of it — here.

Swartland was born in District Six and, after the removals, grew up on the Cape Flats. A dancer and choreographer, he began his career with Cape Town City Ballet and came to Johannesburg to dance in Evita. He danced for Pact and the SABC, choreographed extravaganzas for Sun International, performed in Germany and Taiwan, then went super-
commercial, as a partner in a company doing industrial theatre.

A few years ago he hung up the feathered headresses and started a new career, catering for the TV show Scandal. “People were always saying, ‘Why don’t you open a restaurant?'” he says. On a holiday in Italy, he ate in a tiny bistro and it clicked — he could open something here on that scale. With 10 tables inside and two on the pavement, the restaurant is packed every night — and it opened only late last year.

Like ouma used to make
There’s a joyous ambiance, from the deep-pink wall covered with rows of panama hats to the facing turquoise wall featuring family photos. Ranged around his parents’ framed wedding photograph are pictures of his ouma, to whom praise must be given for the milk tart recipe, his old high school, the Moravian church, Cape Carnivalistas, a bunch of his boyhood buddies.

On one wall is the Coon Carnival suit of his friend Danny Daniels — Swartland donned it for the photo that greets you as you walk in the door.

The serving dishes are the sort your ouma used to use and if you order tea you may get it served in one of his mother’s tea sets.

There’s not much on the menu for vegetarians, although Swartland says that will change. At the moment it’s the salad and a vegetable curry. “We found that people like pumpkin, butternut, chickpeas and lentils,” he says, and sometimes he whips up a small portion of vegetable biryani.

Chef Sophie Links is in charge of finding dishes vegetarians might want to eat.

Thoroughly satisfying
It would be helpful if Links worked with the waiting staff who, though charming, seem by and large clueless, but Swartland almost makes up for that — he’s funny, open and warm, among the most endearing restaurant proprietors to be found in a city like Johannesburg.

As for the food, it depends on what you were raised on. The smoorsnoek is subtly spiced — you might prefer a bit less subtlety. There are practically no bones; boning a snoek that well is a heroic accomplishment. The bobotie, I’m told, is tasty and not too hot; the tomato bredie was pronounced by one diner as “simply divine” and by others “thoroughly satisfying —”

“I want people to come here and feel at home,” says Swartland. After only four months of operation, “we’re still feeling our way as to what people like and don’t like”. It’s still a work in progress.