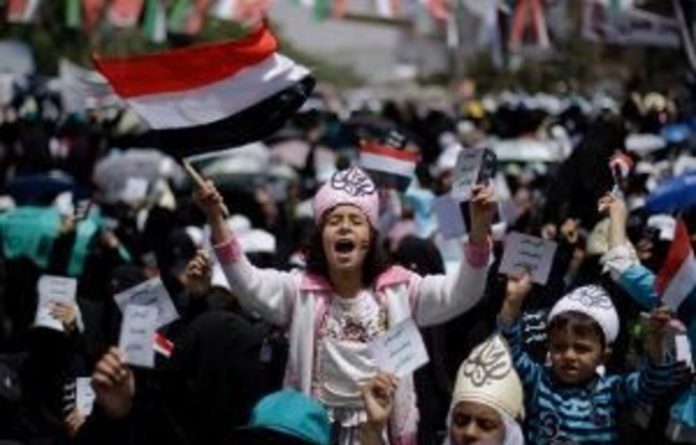 A massive security operation kept huge rival protests apart and split the Yemeni capital on another Friday political showdown on the streets between the president’s backers and his foes.

“I pledge … to sacrifice myself for the people, with my blood and with everything I hold dear,” President Ali Abdullah Saleh said, thanking his supporters in the face of two months of escalating demands for his ouster.

Despite fears of an outbreak of violence, a crush of pro-regime supporters waving flags and banners packed squares around Sanaa, streaming through checkpoints manned by security forces armed with guns and batons.

Tanks and armoured cars were stationed at the city’s entry points.

Convoys of vehicles flying the Yemeni flag earlier poured into the capital from the surrounding countryside for the pro-Saleh rally. “The people want Ali Abdullah Saleh,” they chanted.

“The crowds stretched as far as the eye could see,” an Agence France-Press correspondent said, while state media said “millions” turned out for the president.

In a deeply tribal society, many of the demonstrators carried large portraits of the 69-year-old president in tribal headdress rather than his usual suit and tie.

The army, many of whose officers have rallied with the pro-democracy camp led by youths, controlled access to “Change Square,” renamed by anti-regime protesters holding a sit-in near Sanaa University.

The demonstrators, who also turned out in force on the Muslim weekly day of prayers and rest, set up camp in the area in late February, but appeared to have been put on the back foot on Friday.

In Tahrir Square, about two kilometres away, security forces channelled the influx of regime supporters, many of them tribesmen mobilised by the president, a former military man with strong tribal roots.

After a heated sermon and prayers, Saleh’s supporters trudged the four to five kilometres to Sabiine Square, next to the president’s palace, in the opposite direction of the rival protest.

According to Adel al-Walibi, a leader of the anti-Saleh protests, the ranks of the president’s supporters on Friday were swollen by “out-of-uniform soldiers and armed tribesmen”.

Although no violence was reported in Sanaa, a soldier was killed in south Yemen in clashes with tribal and al-Qaeda forces, a security source said.

Saleh, who showed up on a stage in Sabiine, vowed to defend the Yemeni people and hailed their massive support, in a brief address to the sea of loyalists outside the presidential palace.

As the crowds dispersed without incident, Mohammed Sabri, another opposition spokesperson, said on al-Arabiya television: “The only sacrifice we want [from Saleh] is that he leaves.”

Roads leading to the venues were blocked by security forces, with Sanaa roughly divided into a northern half held by the opposition camp and Saleh’s supporters packing the southern sector.

On March 18, regime loyalists gunned down 52 demonstrators, but amid fears of a repeat a week later they kept rival demonstrators apart by firing warning shots in the air.

Tens of thousands of anti-regime demonstrators on Friday also took to the streets in southern Yemen, correspondents said. Clashes broke out between rival sides in Hodeida on the Red Sea, witnesses said, without reporting casualties.

Since the bloodbath, which sparked widespread condemnation, the regime has been hit by a wave of defections, including among the ranks of the military which now has rival units deployed on the streets of Sanaa.

The pro-democracy protesters, pressing for an end to Saleh’s three-decade rule, called off a planned march on the presidential palace on Friday for fear of renewed carnage.

Under the weight of protests, which Amnesty International said have cost 95 lives in clashes with security forces, Saleh had offered to step down early but has hardened his stance since the massive pro-regime rally of March 25.

Protest leaders say the Yemeni strongman has been emboldened by United States support for an ally seen by Washington as a key partner in its battle against al-Qaeda.

On Friday, a soldier was killed in clashes which pitted the army against tribesmen backed by al-Qaeda members in the restive southern province of Abyan, a local security official told AFP.

He said heavy artillery used in the clash rocked the town of Loder, sending residents in flight to nearby villages. — AP