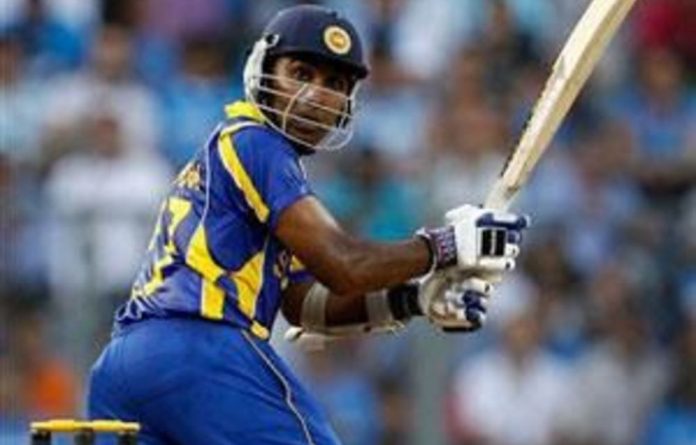 Mahela Jayawardene stroked a delightful unbeaten 103 on Saturday to take Sri Lanka to a challenging 274 for six in the World Cup final against India.

Jayawardene, the only Sri Lankan to exceed 50, held the innings together with deft glides and pushes before cutting loose in the batting powerplay. Sixty-three runs came from the powerplay, Sri Lanka’s highest of the tournament.

He reached his century from 84 balls with a stunning boundary through the covers off Zaheer Khan, stepping outside his leg-stump against the left-arm paceman.

Captain Kumar Sangakkara was the second top-scorer with 48 from 67 balls.

Zaheer bowled brilliantly in his opening spell with meticulous control of line and length. His opening three overs were maidens and the first ball of his fourth accounted for Upul Tharanga (2) who nibbled fatally at another good length delivery which Virender Sehwag seized with a fine tumbling catch at slip.

Shanthakumaran Sreesanth, replacing the injured Ashish Nehra, bowled a no-ball in his first over and conceded two boundaries to Tillakaratne Dilshan in his third.

Indian skipper Mahendra Singh Dhoni pulled him out of the attack then brought him back to replace Zaheer, whose opening five-over spell had cost only six runs.

The volatile Sreesanth, whose five previous overs in the tournament in the opening match against Bangladesh had cost 53 runs, was struck for three boundaries in his fifth over, two of them from consecutive balls by Sangakkara.

Yuvraj breakthrough
Munaf Patel, though, bowled his medium pace accurately from the other end and the introduction of Harbhajan Singh spelt the end of Dilshan for 33. Dilshan tried to sweep and the ball brushed his glove and hit the stumps.

Sangakkara, stylish and determined, used his feet to spinners Harbhajan and Yuvraj Singh to work the ball into the gaps.

Jayawardene drove Harbhajan through the covers and steered Sreesanth, coming back for just one over, to third man for another boundary.

He added 62 from 68 balls with Sangakkara, who was looking increasingly comfortable when Yuvraj made the breakthrough. Sangakkara stepped back to cut and edged the ball to Dhoni who threw it high in the air in triumph.

Dhoni unsuccessfully appealed against a not out decision against Thilan Samaraweera for another caught behind when the batsman was on 10 and Sachin Tendulkar got the loudest cheer of the day when he came on to bowl the 33rd over.

Jayawardene brought up his half-century from 49 balls then cut a loosener from Virat Kohli for four as Dhoni rang the changes.

Zaheer returned and Jayawardene helped himself to a four with a controlled glide to the third man boundary.

He lost Samaraweera lbw for 21 when a review, this time, did not go in the batsman’s favour. Umpire Simon Taufel gave the batsman not out when he missed a sweep off Yuvraj but the television replay showed the ball would have struck the stumps.

Nuwan Kulasekara (32) supported Jayawardene nobly, hitting Zaheer into the stands for the first six of the match, and Thisara Perera completed the powerplay with 22 not out from only nine balls, including a six.

The match began in bizarre circumstances when the coin had to be tossed twice because match referee Jeff Crowe did not hear Sangakkara’s call. Dhoni tossed the coin again and Sangakkara called correctly. – Reuters