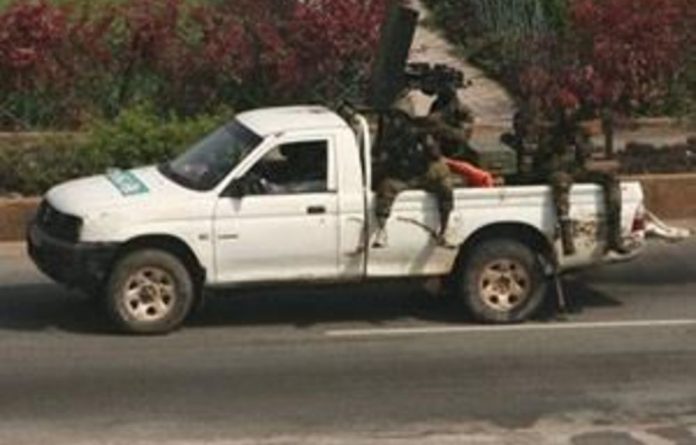 “I can’t go home, the rebels have guns. I don’t have a gun. They kill people and rape women. They can kill children and then they take the small children to go and fight. It’s impossible. I can’t go back.”

In the crowded Liberian refugee camps, just across the western border of Côte d’Ivoire, there are thousands of frightened civilians who share the despair and sorrow of Djeke Fulgence. He stands amid the dusty rows of tents in the UNHCR transit camp for refugees in Toe Town, eastern Liberia.

Fulgence (25) fled with his wife, children and other family members when pro-Ouattara rebels began firing on his home town of Toulépleu. He and his neighbours had been abandoned to their fate. The government soldiers in the area took to their heels, leaving residents defenceless. Four members of his family were shot dead. The survivors ran into the surrounding countryside. “The rebels came with guns and started firing all over the place,” said Fulgence. “I saw many wounded and dead people.”

Dominique Liengme, the head of the ICRC delegation in the country, said in a statement: “This incident is particularly shocking in its scope and brutality.”

Savage attacks
At the Toe Town transit camp, the shock and fear is palpable. Terrified and traumatised, more people flood into the camp by the day. There are constant reports of savage attacks on villages by rebels armed with guns and machetes. Their orders, according to the refugees, are “to kill everyone and anyone”. There are even reports of cannibalism by rebel forces.

Rosalie Ziminin, also from Toulépleu, grabbed every member of her family that she could when the pro-Ouattara rebels came. Fifteen of them made it to the transit camp, but two of her children — aged two and five — were lost in the chaos as they escaped the attack. She still has no idea where they are. Ziminin, like many Ivorians, has not forgotten the devastation from Côte d’Ivoire’s last civil war in 2002. She lost everything during the fighting which claimed the lives of both her mother and father. “I’ve only just rebuilt my life,” she said yesterday. “I’ve lost everything again and I don’t want to go back.”

More than 100 000 Ivorians have sought refuge in Liberia as the rebels have moved south towards Abidjan. Most are being housed and fed by Liberian families. In some of the smaller, more remote villages the number of fleeing Ivorians outnumbers Liberians by 20 to one.

Alice Bomie (12) managed to get across the border with her mother and brother. The family became separated from her sister and she had to leave without her.

Now they have been taken in by a Liberian family in the village of Gbei Vonwei in north east Liberia. Sitting outside the village school in a torn blue dress — the only thing that she now owns — she talks of the corpses she saw as she ran through the town of Danané.

“I saw many dead bodies. It pains my heart when I think of my sister.” – guardian.co.uk