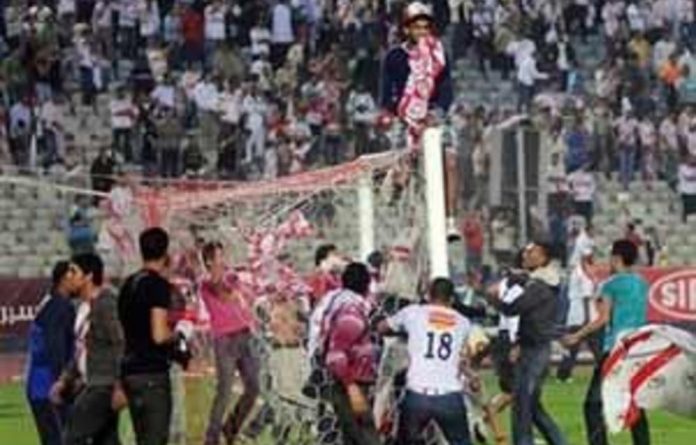 It was trailed as a sporting celebration of freedom over tyranny: clubs from north Africa’s two revolutionary nations coming head-to-head on the football pitch, just weeks after mass uprisings toppled dictators in both countries.

It ended with a thousand-strong pitch invasion, unprecedented riots and the intervention of the army. Egypt’s new prime minister has offered a formal apology to the Tunisian people, after a African Champions League tie played in Cairo on Saturday descended into chaos, on live television.

The match — between Egyptian giants Zamalek and Tunisian outfit Club Africain — kicked off to a festive atmosphere as Zamalek fans decked out Cairo Stadium with banners welcoming their fellow Arabs and lauding the overthrowing of former Tunisian president Zine al-Abidine Ben Ali, which helped spark Egypt’s own revolution soon afterwards.

But as the game entered stoppage time with Zamalek trailing 5-4 on aggregate and facing elimination from the competition, supporters of the home side began pouring on to the pitch in droves. They were incensed at having a goal ruled out for offside. In scenes later described by the Egyptian interior minister as an “act of thuggery” and captured live by television cameras, fans attacked the referee, stripped Tunisian players of their clothes and dismantled goalposts. Nine people were injured and there were an unspecified number of arrests.

“Prime Minister Essam Sharaf has apologised to the government and people of Tunisia, to the players of Tunisia’s Africain and to the Algerian referee for what happened in Cairo stadium,” state-owned daily Al-Ahram reported on Sunday.

The violence came just days after Egypt’s football calendar finally restarted after two months of suspension owing to the anti-government protests sweeping the country. The ruling military council has promised to return stability to the Arab world’s most populous nation, but in the aftermath of Saturday’s drama football chiefs believe the domestic league may now be halted indefinitely.

Despite the unsavoury scenes, there are signs that pan-Arab revolutionary solidarity remains intact. A Facebook group entitled On behalf of Egypt, we are sorry Tunisia swiftly attracted tens of thousands of members, and prompted a series of Tunisian response groups including Apology is accepted, Egyptian people and No apologies [needed] between liberal nations.

Club Africain players, who were escorted to their hotel by soldiers after the attacks, have thanked their Zamalek counterparts for helping to protect them from the mayhem. Africain captain Wissem Ben Yahia said he was grateful to the Egyptian footballers for “doing their best to stop the hooligans”.

The Egyptian FA labelled the events “shameful” and promised a full investigation. It said in a statement: “The FA stresses the strong relationship with our brothers in Tunisia and the rapport that produced the honourable revolutions in both countries. Such a relationship is much deeper than any odd incident from an irresponsible group.”

Another investigation will be held by the Confederation of African Football. Its flagship champions league tournament has already faced a beleaguered season, with matches suspended in war-torn Libya and Côte d’Ivoire. —

The Continent’s Africans of the Year: Mo Salah

The Proteas’ perfect run of netball