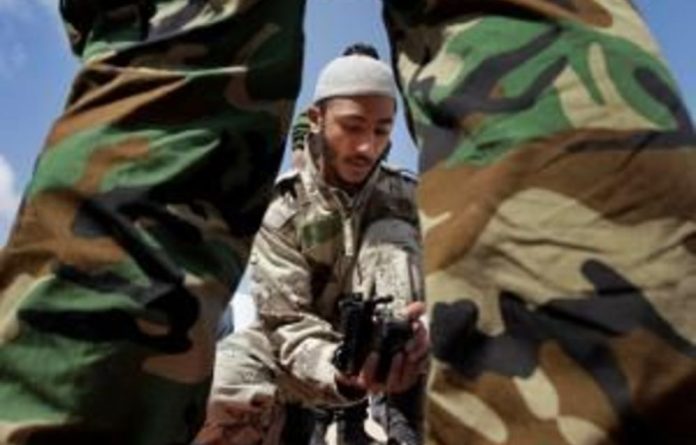 The International Criminal Court (ICC) has evidence Muammar Gaddafi’s government planned to put down protests by killing civilians before the uprising in Libya broke out, the ICC’s prosecutor said on Tuesday.

Protests against the government that began on February 15 swiftly descended into civil war after Gaddafi’s forces opened fire on demonstrators. He then put down uprisings in Libya’s west, leaving the east and the city of Misrata in rebel hands.

Air power led by the North Atlantic Treaty Organisation (Nato) is now holding the balance in Libya, preventing Gaddafi’s forces from overrunning the seven-week-old revolt, but unable for now to hand the rebels outright victory.

Court prosecutor Luis Moreno-Ocampo is to report back to the UN on May 4, and is then expected to request arrest warrants.

“We have evidence that after the Tunisia and Egypt conflicts in January, people in the regime were planning how to control demonstrations inside Libya,” Moreno-Ocampo said.

“They were hiding that from people outside and they were planning how to manage the crowds … the evidence we have is that the shooting of civilians was a pre-determined plan.”

“The plan at the beginning was to use tear gas and (if that failed to work) … shooting,” he added.

Defector sought
The court prosecutor wants to speak to former Libyan foreign minister Moussa Koussa who defected to Britain last week saying he did so because of attacks on civilians by Gaddafi’s forces.

Koussa’s defection would be taken into consideration in the investigation into Gaddafi, his sons and aides, Moreno-Ocampo said, hinting others inside the government might follow suit.

“The fact that Moussa Koussa defected is interesting because that is one option you have. If you have no power to stop the crimes then you can defect to show you are not responsible,” he said.

Fighting on the frontline in the eastern oil terminal town of Brega has become bogged down with Gaddafi’s advantage in tanks and artillery cancelled out by Nato-led air strikes which effectively back the rebels.

Diplomatic efforts to end the conflict have similarly failed to make any progress with the government side offering concessions, but insisting Gaddafi stay in power and the rebels adamant that Libya’s leader for the past 41 years leave.

After a series of rapid rebel advances followed by headlong retreats, the insurgents held their ground for six days in Brega, putting their best trained forces into battle for the town and keeping the disorganised volunteers away.

A Western air strike destroyed two government trucks mounted with heavy machine guns in Brega on Tuesday, but a sustained government bombardment of rockets and mortars then pushed the insurgent pick-up truck cavalcade back towards Benghazi, their biggest retreat in several days of inconclusive battles.

With rebel vehicles strung out in small groups, occasional rockets hit the desert near the road 20km east of Brega.

“Since the day Nato took over the air strikes, we have been falling back,” said Ziad el Khafiefy, 20, a rebel fighter.

“Gaddafi’s troops are hitting us with Grad missiles,” said Mabrouk el Majbary, 35. “Something is wrong … when the US gave leadership to Nato, the bombings stopped.”

After more than two weeks of air strikes, Nato said it had destroyed 30% Gaddafi’s military capacity.

Rebel oil
The rebels appear to be set for a boost with the arrival of a tanker, in one of their ports, which can carry a million barrels of crude, worth more than $100-million — their first shipment since the fighting broke out.

“A sustainable source of income from oil exports will send a strong signal that the opposition is there to stay and only can grow as it tries to bring more and more crude exports on-stream,” said IHS Energy senior analyst Samuel Ciszuk.

The government offered concessions. Spokesperson Mussa Ibrahim said Libya was ready for a “political solution” with world powers and offered a “constitution, election, anything — but the leader has to lead this forward”.

Libyan Deputy Foreign Minister Abdelati Obeidi ended a trip to Greece, Turkey and Malta to set out the government position.

Turkey is expecting an envoy to visit from the opposition in the coming days and is listening to both sides.

“Both sides have a rigid stance,” a Turkish Foreign Ministry official said after Obeidi’s visit. “One side, the opposition, is insisting that Gaddafi should go. The other side is saying Gaddafi should stay. So there is no breakthrough yet.” — Reuters