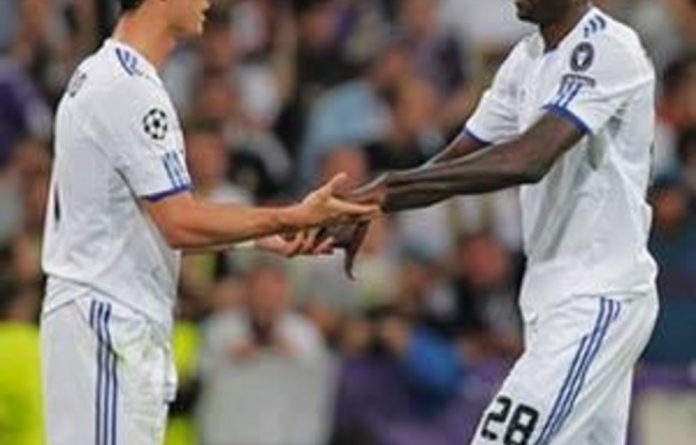 Emmanuel Adebayor headed a goal in each half as Real Madrid hammered 10-man Tottenham 4-0 in the first leg of their Champions League quarterfinal on Tuesday.

Adebayor beat Jermaine Jenas to the ball after just four minutes at the Santiago Bernabeu Stadium to guide a header past goalkeeper Heurelho Gomes and through the legs of Luka Modric on the line.

Tottenham was left with 10 men from the 15th minute when Peter Crouch earned a second booking for a rash tackle.

Ronaldo, Di Maria and Marcelo were rushed back from injury to start for nine-time Madrid, which was playing in the last eight for the first time in seven years.

William Gallas passed a fitness test to anchor Tottenham’s back line with Gareth Bale starting on the left flank after recovering from a hamstring injury. Aaron Lennon was named in the starting 11, but Tottenham manager Harry Redknapp said the England winger felt unwell after warmup and was replaced just before kickoff by Jermaine Jenas. The speedy England winger’s absence was noted as Spurs’ attack disappeared behind Madrid’s second half barrage.

“To get to halftime like we did, I thought we could hang in there and would have a chance. But then our legs ran out a bit,” Redknapp said.

Tottenham’s first matchup against Madrid for 26 years started poorly as the north London club watched Ronaldo pepper its goal in the early stages before Di Maria’s close shot was deflected for the corner from which Adebayor scored the opening goal.

Reckless tackles
Crouch was booked twice for a pair of reckless tackles deep inside Madrid’s half — the England striker scything into Sergio Ramos in the eighth minute before later taking out Marcelo.

“He shouldn’t take that chance that he might get a red card, so I was disappointed,” Redknapp said. “It was an uphill task after that, an impossible task.”

Madrid kept up the pressure while Tottenham looked to strike on the break. Rafael Van der Vaart — playing against his former team for the first time — missed a chance from inside the area in the 28th minute before Bale surged past Ramos to reach a long ball, but his shot past Iker Casillas sliced into the side netting.

Adebayor was guilty of a glaring miss in the 32nd as Ramos did well to head across goal toward the Togo striker from a difficult position.

Pepe took out Bale in the chase for a pass in the 36th minute for a yellow card that will see the Portugal defender miss the return leg.

Madrid coach Jose Mourinho couldn’t have been happy as his side wasted much of its first-half possession, creating few decent scoring chances.

Van der Vaart was replaced by striker Jermain Defoe but Madrid controlled from the restart as it patiently tried to pick Spurs apart with Ronaldo putting a couple of chances wide.

Adebayor doubled the advantage when left alone inside the box and nearly had a third headed goal in the 66th, denied only by Gomes’ quick reaction to tip over the crossbar.

Di Maria’s individual effort made it 3-0 in the 72nd as the Argentina forward moved clear from Benoit Assou-Ekotto before unleashing a curling shot from outside the area beyond Gomes into the top corner.

Late substitute Kaka, returning from injury to play for the first time since February 26, also made his mark as the Brazil playmaker spotted Ronaldo at the far side with a cross in the 82nd that the Portugal international volleyed low past Gomes inside the near post for his fifth of the competition.

Nine-time champion Madrid has never been eliminated over two legs after a 4-0 opening win on home soil.

“It’s going to be very difficult — we have a mountain to climb” Redknapp said, adding that the difference in quality had much to do with Madrid’s spending. “It’s difficult, impossible to compete with teams like that.” — Sapa-AP