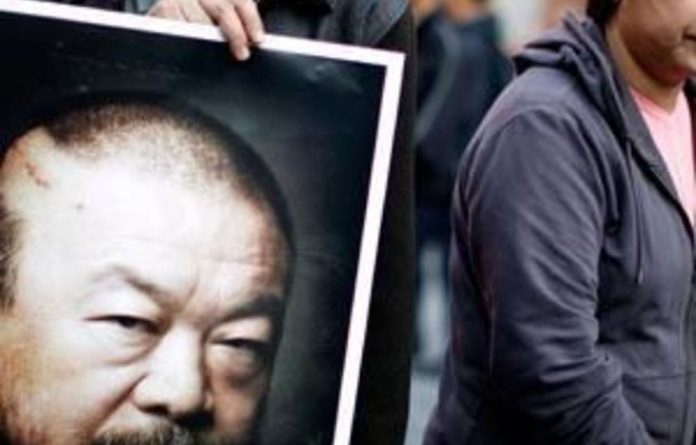 “Police said late Wednesday they are investigating Ai Weiwei for suspected economic crimes in accordance with the law,” the agency said in a dispatch issued just before midnight.

It gave no other details of the allegations against Ai, who was stopped on Sunday from boarding a flight from Beijing to Hong Kong and taken away by border police, sparking condemnation from Western governments and Chinese human rights campaigners.

They and his family believe that Ai, a combative critic of the ruling Communist Party and a well-known contemporary artist, has joined a list of dozens of dissidents and activists detained as part of a crackdown against challenges to one-party rule.

Ai’s wife, Lu Qing, said by telephone that the family would “see what the next step is” if he is accused of economic crimes. She also said that officials had warned her to say no more to foreign journalists.

The official claim that Ai may be under police investigation for economic crimes, which could cover charges such as tax evasion, is unlikely to still the uproar that his case has sparked. Ai has combined an international art career with campaigns critical of government censorship and political restrictions.

On Wednesday, a Chinese newspaper, the Global Times suggested the burly, bearded Ai, who had a hand in designing the Bird’s Nest stadium for the 2008 Beijing Olympics, had been testing the bounds of official tolerance.

His mother, Gao Ying, earlier told Reuters that the authorities appeared to be gathering a case against him because of his outspoken criticism.

“I think they’ll concoct some things against him,” she said by telephone. “I’ve had fears about this before. Every time he’s become involved in something, I’ve been very worried about his safety.”

Since February, the government’s fears of challenges to one-party rule have been magnified by online calls for “Jasmine Revolution” protest gatherings inspired by the political flux across the Middle East and North Africa.

Even feeble efforts to act on those calls were smothered by police, but the threat of protests has triggered an unusually broad crackdown on dissent. At least three activists have been formally arrested on broad subversion charges often used to jail dissidents. – Reuters