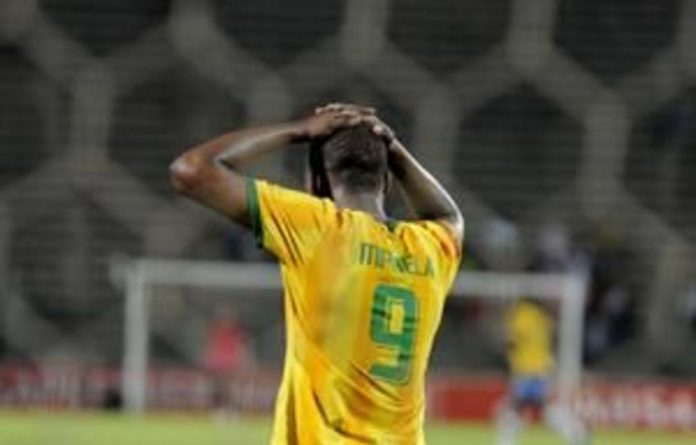 It was supposed to be the night on which the race for the 2010-11 Absa Premiership championship would become clearer, but on Wednesday night the challengers merely swapped positions, giving no indication, after 26 rounds, of who exactly has an advantage over the others and might lay their hands on the Holy Grail at the end of May.

No matter how you look at it, the mid-week results, particularly the fare dished up in Pretoria by Mamelodi Sundowns and Ajax Cape Town, left followers with more questions than answers and there is no doubt that we are headed for yet another photo finish with the last man standing only likely to emerge on the last day of the championship, as has been the case over the past three seasons.

On a rainy and bitterly cold night in which leaders Ajax Cape Town squandered a 4-1 lead to record a sensational 4-4 stalemate with Mamelodi Sundowns at the Lucas Moripe Stadium in Atteridgeville, Orlando Pirates seized the opportunity to snatch a 2-0 victory over traditional rivals Moroka Swallows at Dobsonville in Soweto and moved to the top, albeit on a goal difference against Ajax.

“We did not bother to ask or care to listen to what was happening in Atteridgeville,” said Pirates’ Dutch coach, Ruud Krol. “We were simply focused on our match against Swallows and whatever happened elsewhere across the country did not bother us. We had a job to do and we stuck to our objective and I am happy about the end result.”

Of the four challengers perhaps Pirates have the easiest run-in, starting with an away fixture against a Platinum Stars team that is sliding dangerously into the quagmire, followed by another against equally underperforming SuperSport United, then Amazulu, and finally wrapping up their campaign, against Lamontville Golden Arrows, at home.

Goalkeeper Moeneeb Josephs has dealt Pirates a cruel blow with his injury, but they have compensated for his absence with frightening pace upfront provided by speedy wingers Tlou Segolela and Dikgang Mabalane, who, since his return from injury, has scored three goals in two games.

And Kaizer Chiefs, who, until a month ago, were hotly tipped as likely candidates to land the crown and end a barren decade, clawed their way back from a goal down at the capacity Mbombela Stadium to end with a draw against a hard-fighting Bidvest Wits and went home with a single point, whereas three could have changed their situation completely.

“We missed a lot of gilt-edged opportunities,” Wits coach Roger de Sá said, “and I think with a little bit of luck and had my boys been a little composed in front of goals, this game could have ended with a higher score than the 4-4 draw that was recorded by Sundowns and Ajax Cape Town.”

This should set red lights flashing in the head of Chiefs coach Vladimir Vermezovic about his brittle defence.

Wits hit the Chiefs crossbar twice and, had it not been for goalkeeper Itumeleng Khune, Amakhosi could have been humiliated. This should be of concern to the Naturena outfit who might still have a game in hand over the rest of the title challengers but they will have to tighten up their rearguard fast before they face both Sundowns and Ajax.

But talking about Sundowns, caretaker coach Ian Gorowa must be spending sleepless nights over his strike force — they resembled toothless bulldogs and failed to breach the Ajax defence. Even the usually reliable Katlego Mphela shot blanks and missed a penalty, although he atoned late in the game with a simple tap in from a Nyasha Mushekwi cross.

“We showed character,” said a relieved Mphela. “We struggled to impose our game and style on them for long periods and they forced us to resort to plan B — pumping long balls into their area. And I think they eventually cracked and we could not finish them off. But a draw was better than a loss.”

At the beginning of the year Sundowns were eager to compete in the African Champions League but at the rate they have been dropping crucial points they could find challenging TP Mazembe for continental supremacy only a dream.

Pirates bounced back brilliantly from a debilitating loss to Ajax Cape Town to record a morale-boosting victory over rivals Moroka Swallows and, unless something terrible goes wrong in their run in, which looks relatively easy enough, they should be able to wrap it up when they line up against Golden Arrows at the end of May.

As for Swallows, they are in an unenviable position where they need to keep plugging away and work towards overrunning Maritzburg United, otherwise they could find themselves in a life and death struggle in the playoffs, where few Premiership clubs have found it easy to survive against lower division opponents. Mpumalanga Aces still look the best bet for automatic relegation.