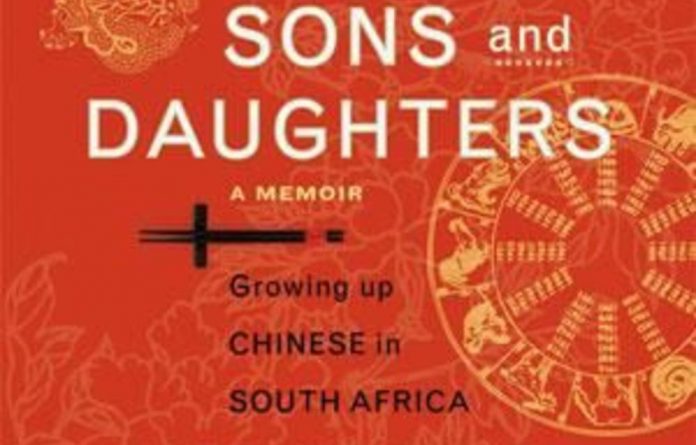 Award-winning journalist Ufrieda Ho explores her Chinese family’s coming to South Africa and settling down — or not — in a memoir both delicate and frank.

For my parents, a university exemption meant they had given us a key to the door out of the life they did not want for us. It was the fulfilment of the contract of their working and my working at school. To miss out was to be sentenced to the burden of the uneducated, to the world of shopkeepers and fah-fee men, men like my dad.

Paradoxically, though, education also put more and more distance between us and our parents. As the world opened for us through books and new knowledge framed with a Western world view, it pushed us further and further from our parents’ outlook on life.

A news bulletin in English started to make more sense to us than it did for my parents, especially my mom, whose English was even more basic than my dad’s. His work outside the house exposed him to more English and the languages outside our home. Yolanda and Kelvin started to take up positions leaning over my dad or mom’s shoulder when they had to open up a letter from the bank or when some other official correspondence needed deciphering. ‘Well, I am not an educated person like some people,” my mom would snipe at us as we got older and used increasingly rational arguments when we butted heads.

The West had also won over our walls. Johnny Depp’s and River Phoenix’s pictures with brooding eyes and flicked-back hair stared out over our beds — the white boys my parents feared. They never made us take down the posters but they did not like the idea that we hero-worshipped pop idols of the blond, blue-eyed brigade.

My parents also had to contend with the Western phenomenon of a matric dance, that symbolic graduation from childhood into the adult world of things formal and proper like high-heeled shoes and bow ties.
The matric dance meant trips to dressmakers, shoe shops and the Oriental Plaza, the fabric and haberdashery hub in Fordsburg where they stocked fabrics with names like lamé that were as glittery as their names sounded.

Fortunately for me, Yolanda and Kelvin had also eased this path for me with their share of sequins, dressmaking, cummerbunds, corsages and, of course, dates. Yolanda’s poor dates and dance partners were subjected to all the embarrassing jokes and jibes that we as the younger siblings could muster, peering through curtains, howling and giggling into our T-shirts as they rang the doorbell.

My parents were supposed to be a little more at ease with this farewell dinner when it was my turn to dance through the schoolyard rite of ­passage.

‘So have you found a partner yet for the matric dance?” mom asked me one afternoon after I had got home from school.

I was not thinking about it too much at that moment and jokingly I told her I was sorted out.

‘I am taking a boy called Donatello to the matric dance,” I chirped.

‘What kind of a name is Donatello?” my mother asked, and I joked that he was a hot Italian.

My mother did not get the joke and she started to get tetchy. She did not believe me when I told her I had come up with the name because it was a character from the Teenage Mutant Ninja Turtles, the four green reptiles turned mutant heroes who saved the world from their gutter hideout, which I watched on TV most afternoons after school. I took her tongue-lashing and put it down to something being lost in translation and left it at that. But a few nights later when my dad was home a bit earlier than usual, he called me to him before I went to bed.

‘Mom tells me you are thinking of asking a white boy to your matric dance.” The lecture was coming, so I rolled my eyes and tried to tell him my Ninja Turtle defence.

He listened but it still did not save me from a lecture. My dad said that white men were not a good choice for Chinese girls. He said they did not understand or have respect for the traditions and customs. I had only to look at some of the people we knew, he continued. My father angled the story to an old family friend. She had had a failed marriage with a Chinese man and became involved with a white man who started treating her abusively. My father was called in often to intervene, calm things down or to take her and the children away when her boyfriend acted up and could not be reasoned with. I nodded, silently cursing the turtles and my silly joke.

With my sequined dress and my hair done up, I went to the dance with a Chinese boy whom I did not know, but who thankfully was not too much of a reptile.

Ho is appearing on the panel Memories of the city, which examines rare perspectives of Jo’burg and South African cities.

It is chaired by Jon Hyslop, and includes Professor Leslie Bank, whose recent book Home Spaces, Street Styles: Contesting Power and Identity in a South African City (Wits University Press) looks at East London. The panel takes place on Saturday 3 September from 11.30 am to 1 pm in the Laager Theatre.