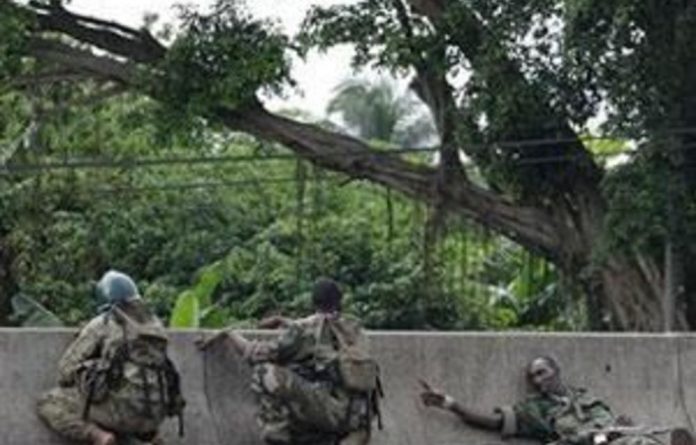 Gbagbo refused to step down after his rival Alassane Ouattara won last November’s presidential election, according to results certified by the United Nations, reigniting a civil war that has claimed more than a thousand lives and uprooted a million people.

Helicopter attacks a week ago on Gbagbo’s heavy weapons by the United Nations and France appeared to bring Gbagbo’s forces to the point of surrender, but they used a lull in fighting to regroup before taking more ground in Abidjan.

It was not yet clear to what extent the latest attacks on Sunday night and early on Monday morning would tilt the battle in favour of Ouattara’s forces or whether further raids would be required.

Residents reported heavy fighting on Monday morning between forces loyal to Ouattara and those backing Gbagbo around Abidjan’s Cocody and Plateau districts, still controlled by forces loyal to Gbagbo.

A French military column of more than 30 armoured personnel carriers, each carrying between four to eight men, left their base in the south and headed towards downtown Abidjan early on Monday, a Reuters witness said.

“Armed and ready for combat,” the commanding officer ordered. The men cocked their weapons ready to fire as the vehicles rolled out of the base.

No information was provided regarding the troop’s mission.

France, the former colonial power in Côte d’Ivoire with more than 1 600 troops in the country, has taken a lead role in efforts to persuade Gbagbo to relinquish power, infuriating his supporters who accuse Paris of neo-colonialism.

Ban said the UN headquarters in Côte d’Ivoire, Ouattara’s base and two civilian districts had been hit by machinegun, sniper and rocket-propelled grenade fire in recent days.

“These actions are unacceptable and cannot continue,” said Ban, authorising UN peacekeepers to use “all necessary means” to suppress the use of heavy weapons by Gbagbo’s troops.

UN forces had launched military operations “to prevent the use of heavy weapons which threaten the civilian population of Abidjan and our peacekeepers”, he said.

Pro-Gbagbo sites including a naval base and several military bases around Abidjan were targeted, witnesses said.

Gbagbo’s spokesperson, Ahoua Don Mello, said by telephone that thick smoke billowed from the presidential residence after the combined French-UN strikes, but he declined to say whether Gbagbo was inside at the time.

“UN and French helicopters continue to fire at President Gbagbo’s residence which has been partially destroyed,” he said.

Residents near the presidential palace and Gbagbo’s residence, where he is said to be holed up with his family, close advisers and about 1 000 militiamen, said they heard heavy cannon fire and shooting on Sunday afternoon.

Ouattara’s government said it had asked the United Nations to carry out its mandate after its base in the UN-protected Golf Hotel and civilians came under heavy weapons attack from Gbagbo’s forces.

They have launched a counterattack against Ouattara’s troops, who had swept from the north to coastal Abidjan almost unopposed more than a week ago in a drive to install Ouattara as the top cocoa producer’s leader.

Gbagbo’s defeat had appeared imminent last week and talks took place between the two sides. But Gbagbo’s soldiers have dug in, holding on to swathes of the city and frustrating hopes of a swift end to the conflict.

The US State Department condemned the attack on Ouattara’s hotel and said Gbagbo’s attempts at negotiation last week were no more than a ruse to regroup and rearm.

Loud explosions
A Reuters correspondent at the French military base near the airport, about 15km from Gbagbo’s residence, said loud explosions could be heard coming from the direction of the fighting on Sunday. Four helicopters, two UN and two French, carried out operations.

A resident of Cocody neighbourhood where Gbagbo’s residence is located said he could see thick black smoke coming from the building.

Earlier, a lull in fighting had allowed residents to come out in numbers not seen in the past 10 days to buy food and other supplies.

Even if Gbagbo relinquishes power, Ouattara’s ability to unify the West African country may be undermined by reports of atrocities against civilians since his forces charged into Abidjan. Ouattara’s camp has denied involvement.

Human Rights Watch said on Saturday that forces loyal to Ouattara had killed hundreds of civilians, raped over 20 women and girls perceived as belonging Gbagbo camp and burned at least 10 villages in western Côte d’Ivoire.

Those loyal Gbagbo, in turn, killed more than 100 alleged supporters of Ouattara in March.

Relief agency Médecins Sans Frontières said on Sunday that the battle for Abidjan is pushing its four million residents ever closer to a health disaster. – Reuters