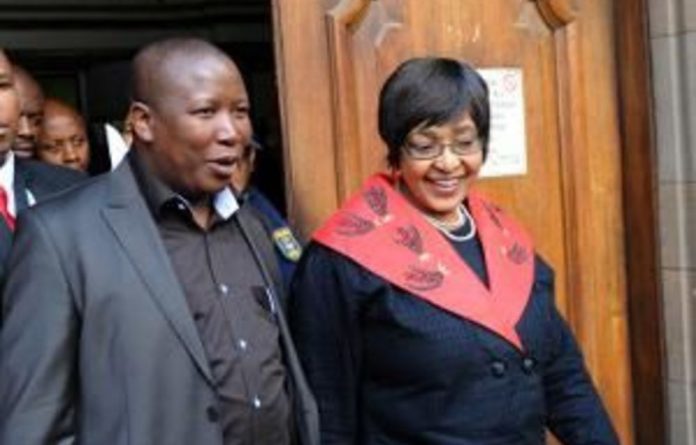 “People who have arms are supposed to be dispossessed of them in this court,” said Lamont when power returned after a brief blackout.

He said he would not tolerate firearms in his court.

On Monday, Malema’s bodyguards carried assault rifles into the court passage although on Tuesday they did not.

However, there were a number of policemen present bearing arms.

“It poses not only a threat to the witness, but also to me,” said Lamont.

He told Malema’s lawyer, Vincent Maleka, that he did not know if the firearms were part of his delegation, but he wanted them removed.

Threatened
After a short period where people in the gallery craned their necks to see who the judge was referring to, Maleka continued cross-questioning AfriForum Youth leader Ernst Roets.

He said he felt threatened by Malema, whom he regarded a racist.

Roets did not feel welcome in South Africa due to statements such as the one being argued over, and said his Afrikaans community, which is a minority, would be increasingly threatened and marginalised by such songs.

“The concern is that songs and songs like this sung by Malema can only be damaging.”

He said it went against the Constitution and democratic principles.

Museums, history books and plays
He conceded that he and his delegation were not harmed during a meeting with Malema at ANC headquarters, but they had joked beforehand about taking security. After the ANCYL had explained that the song had a struggle history, they gave a demonstration that left the AfriForum Youth confused, although not harmed.

He said the song had a place in museums, history books and plays, but not in the political environment.

Maleka took him to task on an AfriForum gathering where a placard was displayed saying Malema had blood on his hands, and asked Roets if this was meant literally.

Roets said it was not literal but referred to murders of farmers.

Maleka then said it was not Malema creating racial polarisation.

“In fact it is you who are creating the climate [of racial polarisation].” — Sapa