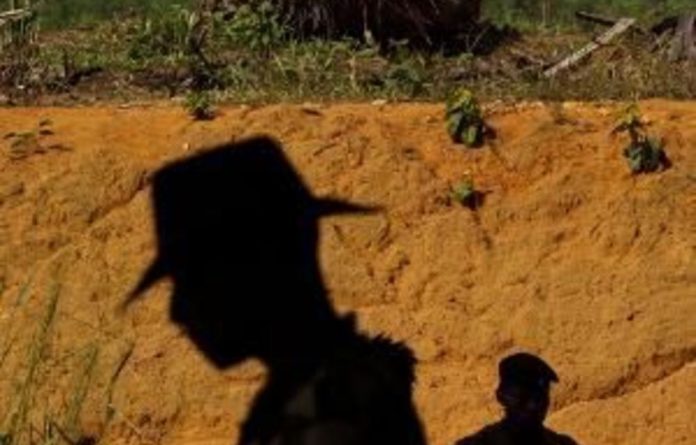 In a statement Justice Minister Jeannot Ahoussou-Kouadio recalled how the former strongman had been arrested after fighting between government forces and pro-Gbagbo troops “assisted by Liberian and Angolan mercenaries plus militias”.

“Pending the opening of a judicial inquiry, Mr Laurent Gbagbo and some of his companions have been placed under house arrest,” he said.

The government did not state where Gbagbo was being held, nor who the “companions” were.

Gbagbo was picked up on Monday by pro-Ouattara forces helped by the United Nations (UN) and France, and taken with his wife Simone and others to his rival’s headquarters, the Hotel Golf.

The UN said earlier on Tuesday he was still in the hotel and had not been moved out of the economic capital, contrary to first reports by a spokesperson.

United States President Barack Obama telephoned Ouattara to congratulate him on taking power and called for justice for the victims of the bloody political crisis.

Gunfire and explosions were heard in areas largely loyal to Gbagbo, the central Plateau district and Cocody in the north, as pro-Ouattara forces tried to return the city to normality after 10 days of bitter street battles.

“There were clashes using heavy weapons” around midday, a resident of Plateau, largely deserted since fighting erupted and home to the presidential palace, told Agence France-Presse by telephone.

The White House said in a statement that Obama had called Ouattara “to congratulate him on assuming his duties as the democratically elected president of Cote d’Ivoire”.

‘Dawn of a new era’
In Cocody, where Gbagbo was arrested at his official residence on Monday, a resident said “there was sporadic small arms fire in the morning, after which we heard rocket and heavy machine-gun fire for several minutes”.

Fighting in Abidjan has left streets littered with bodies and parts of the city in the grip of looters.

The north of the sprawling metropolis was particularly affected, with armed men aboard 4×4 vehicles smashing down house gates under cover of darkness and making off with electrical goods, residents said.

But a semblance of normal life appeared to return to the southern district of Treichville and to Adjame in the north, where witnesses said traffic was resuming and some shops had reopened.

Ouattara addressed the nation late on Monday, the day his troops captured Gbagbo from a besieged presidential bunker in a joint operation with French and UN troops, vowing justice, reconciliation and security.

“I ask you to remain calm and show restraint,” Ouattara, the 69-year-old elected leader of the West African country, said in a televised address, hailing “the dawn of a new era of hope”.

‘Critical’ humanitarian emergency
He also announced “legal proceedings against Laurent Gbagbo, his wife and his allies”, adding that “all measures are being taken” to protect them following their dramatic capture.

A former interior minister who was arrested along with Gbagbo, Desire Tagro, died on Tuesday in circumstances that remained unclear, sources said.

A Gbagbo supporter alleged Tagro was shot while in custody at the hotel but one of the sources, a diplomat, said he might have tried to kill himself.

Gbagbo, who had held power since 2000 and stubbornly refused to admit defeat in November’s presidential election, also called for a laying down of arms in televised comments shortly after his capture.

UN Secretary General Ban Ki-moon welcomed Ouattara’s promise to set up a truth and reconciliation commission to look into accusations of massacres and other crimes made against both sides in the conflict.

The UN, which has more than 9 000 troops and police in Côte d’Ivoire, will keep up its mission helping to restore law and order and Ban offered help coping with a “critical” humanitarian emergency.

The UN has said that at least 800 people have been confirmed killed in the fighting.

Aid and sanctions
Regional bloc Economic Community of West African States (Ecowas) said in a letter to Ouattara that Gbagbo should be treated fairly “despite his violent and stubborn opposition to the choice made by the Ivorian people”.

The presidential crisis has crippled the formerly wealthy nation’s economy, and France and the European Union on Tuesday promised financial help.

France said it will give a €400-million aid package to its former colony, aimed at meeting emergency needs in Abidjan, restarting the economy and allowing the country to make its overdue payments to international institutions.

The EU last week lifted some sanctions imposed on Côte d’Ivoire, the world’s top cocoa producer. Its coffee and cocoa industries represent 40% of export revenues and one-fifth of the country’s gross national product.

Paris meanwhile confirmed its military had taken part in weekend raids at the UN chief’s request, but firmly denied claims from Gbagbo’s camp that its special forces had taken a direct role in his arrest. — AFP