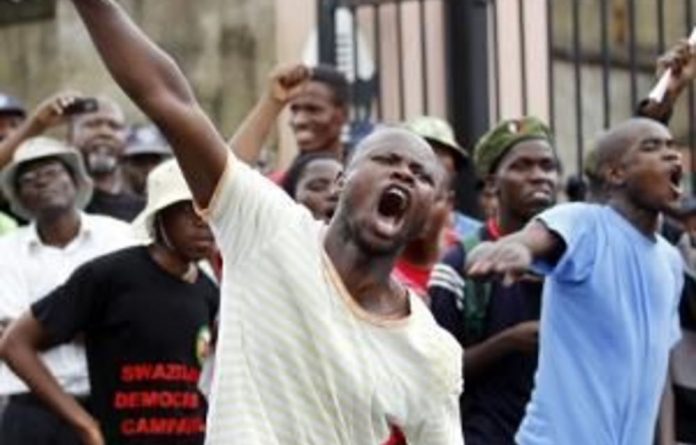 A “whole army of police” invaded the offices of the Swaziland National Teachers Association (Snat) at 7pm on Wednesday evening, according to Snat president Sibongile Mazibuko.

The police had laid siege to the offices for most of the afternoon with police in riot gear, armoured hippos and a water-canon vehicle surrounding the office. The police had earlier tried to storm the offices, firing tear gas canisters and attacking the back fence before retreating.

Said Mazibuko: “The just drove through the front gate and now they want to evict all the comrades who have no money to go back home. They are claiming there are guns here and they are moving me from office to office to look for them. There are no guns here.”

According to Mazibuko there were about 200 teachers who had decided to spend the night at the Snat offices. She said the police were effecting the final push to ensure that all union leaders were rounded up and detained.

On Wednesday morning, Swaziland security forces began arresting union leaders and recognisable activists at the 24-hour roadblocks around the country. Manzini was set to be the focal point of Wednesday’s protests, but many of the activists from around Swaziland did not make it into the city.

Four other activists were arrested at about 2pm on Wednesday at another protest in Manzini. International Research Academy for Labour and Education’s coordinator Percy Masuku, Swaziland Youth Congress’s national organiser Mcolisi Ngcamphalala, Swaziland Youth in Action member Lucky Dlamini, and Goodwill Sibiya of Pudemo were arrested after attempting to start a protest at the Manzini bus rank.

The M&G was unable to ascertain how many people have been injured on Wednesday and Thursday as hospitals in the country refused to accept patients who were unable to present a police report explaining any physical injuries.

Earlier, the unions called off their planned second day of anti-government protests due to intimidation by the government forces.

The M&G had visited Mazibuko at a secret location where she was hiding from police. According to Mazibuko, union leaders had been apprehended en route to Manzini this morning at the 24-hour roadblocks the government had set up around the country.

Leaders under house arrest included Musi Mhlanga, the general secretary of Snat, and the secretary of the Labour Coordinating Council, which had called for the three days of protest that began on Tuesday April 12.

The date was significant as it marked the 34th anniversary of the day King Sobhuza II — the father of the present monarch King Mswati III — had nullified the country’s onstitution, banned political parties and declared a state of emergency that persists until today.

There has been no confirmation on the number of unionists detained or arrested on Wednesday, but there are suspicions that they include the Swaziland Democratic Front’s Mduduzi Gina, and Swaziland Federation of Trade Unions president Barnes Dlamini,among others.

The leader of the banned People’s United Democratic Movement, Mario Masuku, has been not been heard from since Tuesday.

Former president of the Swaziland Youth Congress [Swayoco], Wandile Dludlu, also arrested on Wednesday, managed to send a text message to the Swaziland Solidarity Network’s Lucky Lukhele, which read: “[It] is very tense today; there are lots of police in towns, streets, roads and other hot spots. While the people feel intimidated by the presence of police in every corner of Swaziland, they are also happy that for the very first time in their history they have the courage to challenge Mswati and his corrupt government. April 12 uprising is the dominating discussion in public places including the bus rank and kombis.”

While Manzini was much quieter on Wednesday, there remained a heavy police presence around the city’s bus rank and on the streets. Soldiers were patrolling in vans as police monitored the streets on foot.

Activists suggested that many of the police and army had gone undercover and were patrolling the streets in plain clothes.

Prime Minister Barnabas Dlamini, a staunch royalist, has banned the protests, which began as a Facebook campaign modelled on uprisings in north Africa.

The king has not spoken publicly about the protests, but sent his top advisers to meet with union leaders last week in a failed bid to convince them to drop the protest plan.

With 13 wives and a fortune estimated at $100 million, Mswati is ranked by Forbes magazine as among the 15 richest monarchs in the world.

But nearly 7% of Swazis live on less than a dollar a day, the unemployment rate is 40%, and 25% of adults have HIV, the highest rate in the world. Life expectancy is the lowest in the world, at 32.5 years.

Its economy depends entirely upon South Africa, which finances most of the Swazi government’s income through a regional customs union that sees Pretoria lavish money on its smaller neighbours.

South Africa’s largest labour federation the Congress of South African Trade Unions, has vocally taken up the Swazi protesters’ cause, holding a solidarity rally at a key border post on Tuesday.

South African President Jacob Zuma, currently in China for a summit of major emerging powers, has yet to comment on the unrest. — Additional reporting by AFP