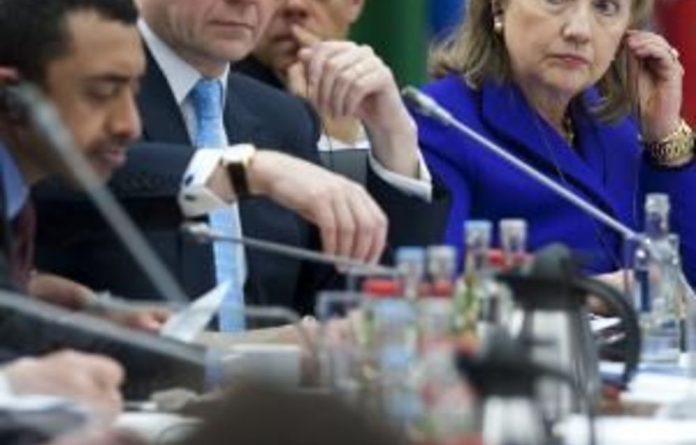 Alliance members agreed that Gaddafi must leave power but insisted the military mission remain focused on its declared goals of enforcing an arms embargo, protecting civilians and forcing the withdrawal of Gaddafi forces from cities they have entered.

The limitations of Nato’s aims have been tested by the Libyan rebels’ inability to make progress against Gaddafi’s stronger and better organised forces, who have camouflaged themselves and hidden in populated areas to avoid Western airstrikes, now in their third week.

As a result, Britain and France have been calling for more strikes by their Nato allies, particularly the United States, with its sophisticated surveillance and weapons systems. The US says it sees no need to change what it calls a supporting role in the campaign — even though it has still been flying a third of the missions — and many other Nato nations have rules preventing them from striking Gaddafi’s forces except in self-defence.

“To avoid civilian casualties we need very sophisticated equipment, so we need a few more precision fighter ground-attack aircraft for air-to-ground missions,” he said. “I don’t have specific pledges or promises from this meeting, but I heard indications that gave me hope.”

Meanwhile, Gaddafi’s troops unleashed heavy shelling for three hours on the port city of Misrata, which is partly held by rebels who are defending positions against government forces. At least nine people were killed, witnesses said,

US Secretary of State Hillary Rodham Clinton did not say whether the US would send more ground attack craft, but she appealed to the other Nato foreign ministers for unity over the Libyan campaign.

“As our mission continues, maintaining our resolve and unity only grows more important,” Clinton said. “Gaddafi is testing our determination.”

Gaddafi must go
Nato’s 28 members are “sharing the same goal, which is to see the end of the Gaddafi regime in Libya,” Clinton said. “We must also intensify our political, diplomatic and economic mission to pressure and isolate Gaddafi and bring about his departure.”

She said, however, that regime change was outside Nato’s military mandate.

In Cairo, UN Secretary-General Ban Ki-moon chaired a meeting of regional and international organisations on Libya and set three targets: Reaching and implementing a cease-fire; delivering humanitarian aid; and starting a dialogue on Libya’s future.

Rasmussen said the alliance’s foreign ministers had endorsed a statement calling for Gaddafi to leave power, and remain committed to completing the mission there despite the recent divisions.

High tempo
The Pentagon noted that Americans have flown 35% of all air missions over the past 10 days. Fogh Rasmussen said the alliance was keeping up “a high operational tempo”.

One proposal from Italy — Libya’s former colonial ruler — calls for the western powers to provide defensive weapons to rebels. Clinton didn’t comment on that plan but said the world must “deepen our engagement with and increase our support for” the Libyan opposition.

“In reality, we have the same objective — this objective is to allow the Libyan people to enjoy democratic freedom,” said France’s foreign minister, Alain Juppe, adding “there will not be a military solution to the problem, there can only be a political solution”.

“There is no future in Libya with Gaddafi,” Juppe added.

Juppe was guarded when asked whether France believes Libyan rebels should be supplied with arms.

“France is not in this frame of mind,” he replied.

German Foreign Minister Guido Westerwelle said Berlin agrees with France and others that “Libya can only have a good future if this dictator goes”.

Reward
The European Union rewarded the most senior official to defect from Gaddafi’s regime by unfreezing his assets and lifting a visa ban that had barred him from traveling in any of the 27 EU countries.

The measure lifting sanctions against former Foreign Minister Moussa Koussa — agreed to Tuesday but made public Thursday — was at least in part an attempt to lure other senior figures into deserting Gaddafi defectors, an EU official said. –Sapa-AP