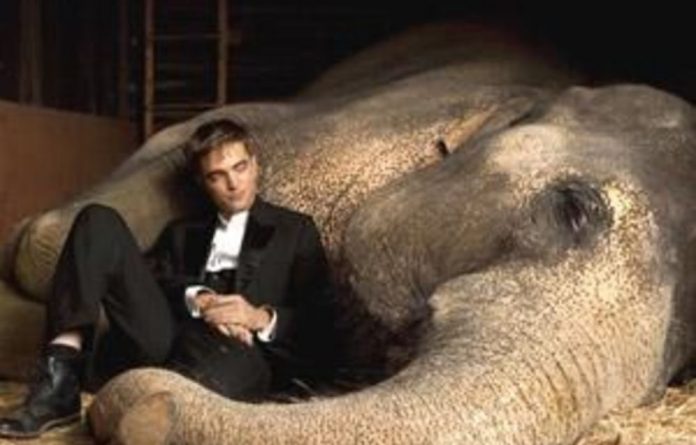 During the Depression, a handsome young man joins the circus as a vet. The chief of this circus is a bit of a bastard and a gangster; his wife, however, is a gorgeous vision and the young man is soon enamoured of her, while becoming ever more upset with the bastard-gangster’s evil ways. You can see where this is going.

Water for Elephants is the movie. But you don’t even need to see the opening half-hour to predict where it will end up. Just look at the poster.

Robert Pattinson of Twilight fame is the handsome young man, Reese Witherspoon is the lovely lady, as the names at the top of the poster indicate. These are big big stars; Pattinson already has such a huge following that he is known in Teenland as “R-Pats”. I think Witherspoon, if only for this occasion, should be given an equivalent mini-moniker, so let’s call her “R-Wiz”.

But the names are secondary. The image on the poster is the real giveaway: it shows R-Pats and R-Wiz entwined in a tender embrace, which means that before we’ve even stepped into the cinema, we know the leads are to be lovers.

So that’s our expectations set up, but it’s also a kind of spoiler, if we were going to be in any doubt as to what this all would add up to. A poster saying “Look! Robert and Reese fall in love!” is a spoiler because it takes almost the entire length of the movie for them to do so. It would be okay if that was the starting point, but it’s not. It’s the whole story.

Or maybe it’s just me. Maybe the target market at which Water for Elephants is aimed, which must surely be the Twilight fan base of teenage girls, relishes the long-drawn-out development of R-Pats and R-Wiz’s love. Maybe it gets all tingly at the prospect of a climactic moment that is deferred and deferred again, enjoying what adds up to an hour and a half of awkward foreplay. I don’t know. All I can say is that, for these reasons, I found the film very boring indeed.

And that’s in spite of its reasonably good-looking, though not very inventive, cinematography and mise en scène. This Depression-era circus is brought prettily to life, and the train on which the circus people live, travelling always from one place to another, has a somewhat grungy texture that works well to show that these people are poor and desperate, that their circus jobs are keeping them just above the breadline.

The film makes clear, too, that any kind of enterprise of this kind in this era was bound to be a cut-throat business, so the wickedness of this circus boss (Christoph Waltz) is largely understandable, though we’re also supposed to disapprove, of course. We keep getting told or shown how bad he is, how he throws people off the train when he can’t pay them, and so forth, but I think we’re also supposed to be seduced, at least in the beginning, by his cavalier charm.

Still, it’s not much of a mental stretch to see that he will soon become more fully the villain of the piece. His views on animals, at any rate, tell us pretty early on that he’s not nice guy. A circus movie is a perfect opportunity to pack in as many animals as you can, and animals are a very convenient way to employ what used to be called the “pathetic fallacy” — they are easily usable as emotional fulcrums as the story progresses.

When the titular elephant arrives at the circus and is sentimentally swooned over by R-Pats and R-Wiz, it is possible to predict with almost forensic accuracy that the big old elly will be a key feature in the plot’s development, not to mention the moral pointers it will load on to the story to tell us who to care for, who to hate, and so on.

Once we’re clear about a certain person’s villainy, and that villainy has been directed at the dear sweet old elephant, we can also glimpse the outlines of the villain’s come-uppance — and so it proves to be the case. A few key coincidences (one of which is so ludicrous one can barely think past it) get the plot over some difficult moments, and we’re away.

I’m struggling to see the point of Water for Elephants. I suppose it can only be that R-Pats is a huge drawcard and any movie he’s in is worth financing. I don’t know the status of R-Wiz in the hierarchy of teen fans, but presumably she’s still worth the investment (even if she is looking rather drawn and too skinny).

And so we have an overblown melodrama motivated chiefly by the ways in which R-Pats’s face, brooding eyes and wry little smile can be monetised. Not too far, I suppose, from the way circuses exploit animals.