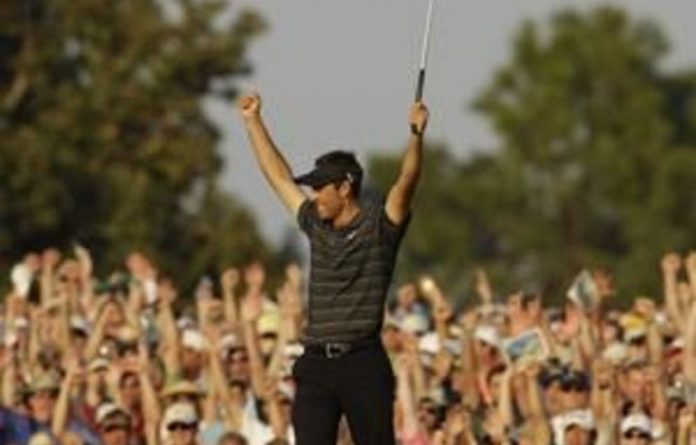 He may be the son of a chicken farmer but there was nothing ‘chicken” about the way Charl Schwartzel approached the final four holes at Augusta on Sunday on his way to a memorable Masters victory.

It’s said that the Masters only really begins on the back nine on Sunday and this is where the tournament is won and lost. So it proved with the 2011 tournament, with the 26-year-old South African holding his nerve among a bunch of players dominating a packed leaderboard, including four-time winner Tiger Woods and seasoned Australian Adam Scott — both hungry for a green jacket, for different reasons.

For Schwartzel, it was a chip and putt for birdie at the par-five 15th, followed by putts of about six metres for birdie at the last three holes, thanks to three solid, nerveless mid-iron approach shots, including one from the right-hand rough at the 17th, which required working the ball around a clump of trees and stopping it on a thin sliver of lightning-fast green.

A more composed finish from a Masters champion you’d be hard-pressed to find and this from a man who was playing the tournament for only the second time. The end result: a two-shot victory over Scott and Jason Day — and gasps of awe from the international commentators, who were aware of his good record on the European Tour but never expected Schwartzel to charge through the pack and finish as the last man standing at the historic tournament.

For those who know him well, however, it was a different story. Former SA Open and PGA champion Gavan Levenson coached Schwartzel between the ages of 14 and 18 and can remember what set the small, thin youngster apart from his peers. ‘He was probably one of the best putters of a golf ball I had ever seen, even in those days. And the other thing that stood out was that when I arrived here he was waiting for me and, when we wanted to go home, he wanted to know why we were leaving so early,” says Levenson.

Schwartzel’s love for the game had started a decade or so earlier, courtesy of father, George, who was a talented amateur before turning professional in the late 1970s. When the future Masters champion was born, the family were living in Pietersburg, before Schwartzel senior moved them to Vereeniging to further his chicken farming business.

‘Like a lot of fathers who play golf, I bought him those plastic clubs when he was still in nappies,” says Schwartzel, who would take his young son along to Maccauvlei golf club when he was a bit older.

‘When he got tired, I’d put him on the seat and pull the golf cart, but he’d come along all the time and help me read lines.”

Unquestionable talent
Having spent enough time with South Africa’s best players of the day, on tour and at interprovincial amateur tournaments before that, Schwartzel senior knew unbridled talent when he saw it.

‘There was no question. I actually grew up with Dale [Hayes] and I saw how good he was. When Charl was growing up there was so much similarity between the two. He just did things that you weren’t supposed to do. He was that good,” he says.

George recalls moments that stood out for him in his son’s early days as a golfer, including a memorable victory over junior Springbok Etienne Bond when Charl was 13 and Bond was in matric.

There was also the time at Randfontein when the small 13-year-old, who could barely hit the ball out of his own shadow, turned up and shot 69 to stun the rest of the field.

It seems trite now to suggest that Schwartzel was always destined for major championship success, because there are enough examples, such as Sergio Garcia and Colin Montgomerie, to scupper that argument and illustrate that talent alone is not enough.

The quietly spoken Afrikaans boy from Maccauvlei has put in the hours of work and is reaping the rewards. We forget that he already has six victories on the European Tour, but a Masters green jacket catapults him into an elite group.

‘A complete player’
Levenson’s words in Golf Digest magazine last month have proved prophetic, with the well respected golf coach predicting that his former pupil would be the next South African to win a major title. But for Levenson it wasn’t a case of peering into a crystal ball.

‘He’s a complete player. He has long game, short game, he hits the ball a long way, he hits it straight, he chips and putts well. But, the most important thing is mentally, that guy is so strong and so determined. He just sees the game very well.”

Like Charl’s father George, Levenson is able to draw comparisons with another fairly well known South African golfer of the past. ‘I can remember playing with Gary Player and he had a very similar type of focus. He’d be talking to you, but he’d look right through you, his concentration levels were so high. Charl has that similar type of focus,” says Levenson.

It’s been a heady few days for South African golf. Schwartzel’s Masters victory was followed by the announcement that South Africa will host a World Golf Championship event for five years, starting in 2012. Currently, there are four WGC events every year and, aside from the majors, these are the events the world’s top 70 ranked players clear their schedules for because of the prize money on offer, the ranking points and the prestige.

That’s a huge shot in the arm for the sport in this country and the timing couldn’t have been better. South African golfers currently hold two of the four major titles, with Louis Oosthuizen due to defend his Open Championship title in July, and Tim Clark the reigning champion of the Players Championship, widely regarded as golf’s ‘fifth major”.

Throw in five South Africans in the top 31 in the world rankings, with Schwartzel leading the way at number 11, followed by Ernie Els, Retief Goosen, Oosthuizen and Clark and yet again we are talking about golf being South Africa’s ‘strongest” sport in terms of sustained success on the world stage.

The likes of close friend Oosthuizen may have something to say about this, but Schwartzel could be at the forefront of that success for years to come.

As Levenson says: ‘He’s very focused, he’s kept himself in physically great shape, he practises hard, he’s got a very good family circle. He’s got all the right things that are going to make him the kind of person that has longevity, like a Nicklaus or a Player.”