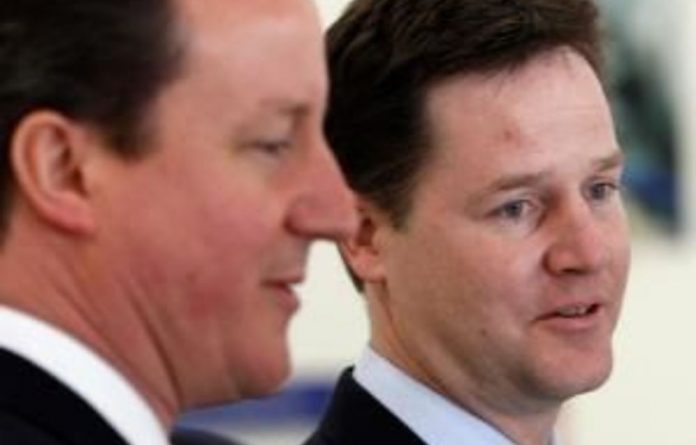 Prime Minister David Cameron warned Britons on Monday to wake up to the dangers of electoral reform ahead of a referendum next month which risks undermining his year-old coalition government.

The May 5 plebiscite on changing the voting system for parliamentary elections pits Cameron’s Conservatives, who oppose a change, against their Liberal Democrat coalition allies, who have long backed electoral reform.

The vote will prompt a period of political turbulence for either Cameron or Lib Dem leader Nick Clegg and could weaken a coalition which has pledged to serve a full five-year term and remove the bulk of a record peacetime budget deficit.

Although the decision may alter the way Britain is ruled, the campaign has failed to excite Britons more captivated by next week’s royal wedding and the prospect of a series of public holidays starting with this weekend’s Easter break.

“The biggest danger right now is that Britain sleepwalks into this second-rate system, waking up on May 6 with a voting system that damages our democracy permanently,” Cameron said in a speech.

The winner takes it all
He was joined on stage by former Labour minister John Reid, putting aside party allegiances to campaign against changing from the winner-takes-all First Past the Post (FPTP) system to the Alternative Vote (AV) system, which critics say risks making indecisive election outcomes more frequent.

In another corner of London, Lib Dem Business Secretary Vince Cable was sharing a platform with Labour leader Ed Miliband to press the case for AV, which gives smaller parties a better chance of winning seats in parliament.

The Lib Dems secured agreement to hold the referendum as a prize for entering a coalition last year after Labour lost its 13-year grip on power.

Under the proposed system, voters may list candidates in order of preference in single-member constituencies. When each candidate is eliminated, the preference votes are redistributed until a winner has a majority of votes cast.

AV falls short of Lib Dem dreams of a truly proportional system but is seen as a staging post on that road. Defeat in the referendum would further weaken Clegg, who has seen his poll ratings slide over the past year following high-profile policy concessions to the Conservatives on issues such as student fees.

In a fix
The vote also places Cameron in a bind. He does not want to see Clegg weakened, but more importantly he faces a backlash from his own party were the change to be approved.

In a sign of the complications caused by the campaign, Cameron said that AV would be a bad thing because it would make coalitions more likely.

He argued that coalitions were a good thing only in exceptional circumstances, such as the current economic crisis.

“More frequent coalitions in all circumstances are quite different,” Cameron said.

A poll at the weekend put the “No” campaign in the lead with 43%, to 37% for the “Yes” camp and 21% undecided. Confusion about the issue and likely low turnout make the outcome harder to call.

The referendum coincides with local elections across much of England and votes for devolved assemblies in Wales, Scotland and Northern Ireland. That should help to boost turnout in many parts of the country and add to the legitimacy of any changes. — Reuters