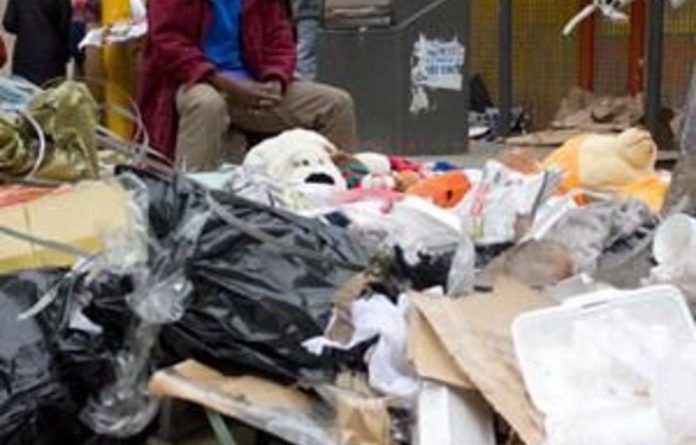 As a strike by refuse workers drags on, the streets of Johannesburg have been turned into a dumping ground, with garbage bags and bins still littering many pavements.

Employees of rubbish removal company Pikitup have been on strike since April 7, and hopes of the strike ending on Monday were dashed in the Labour Court when Judge Annali Basson ruled that the strike was protected following an application by the city to have the strike declared unprotected.

While for some neighbourhoods it has become a nightmare to get rid of refuse, others that can afford the extra costs have made alternative plans.

“We got very desperate after the refuse started piling up and we began looking for private companies. We settled for a company called All Waste,” Linus Muller, head of communication for the Blairgowrie Community Association, told the Mail & Guardian on Monday.

However, Muller said even with the help of a private company, the situation is still “exceptionally bad”, and that not everyone is prepared to “pay out of their own pocket for [private] refuse removal, and pay Pikitup at the end of the month”.

Hazards
And as the rubbish keeps piling up on the streets of Johannesburg, so too do the hazards, with rats, flies and cockroaches being a health concern. On Monday, Business Day reported on the danger of rats: “Rats can facilitate the spread of a number of diseases, the most common being dysentery, rabies and salmonella.” The article warned of a potential rat explosion in Johannesburg due to the strike.

The M&G asked readers on twitter on Monday to share their experiences of the strike. One reader, @fhpienaar, said: “We paid R40 per bin to [a] private company.”

Said @GrantHofmeyr, “Surely an ideal opportunity for election candidates to make an impression? Where are they?”

@richelectron said, “Bought a 2nd wheelie bin, both chocka block now! Have to manage our own garbage until after easter? Unacceptable!” while @mike_steyn said, “Getting private removals!! Don’t think we should have to pay for refuse for this period!!”

However, the end is not yet in sight. This morning’s judgement in the Labour Court means the strike will continue.

Pikitup employees refuse to go back to work until the City of Johannesburg signs an agreement to investigate allegations of corruption and irregularities against the company’s management. Among their demands, the employees — represented by the South African Municipal Workers’ Union — want casual workers to be made permanent and wage inequalities to be addressed.

Several Pikitup board members, including board chair Phumla Radebe and the company’s managing director Zami Nkosi, have resigned since the strike started.