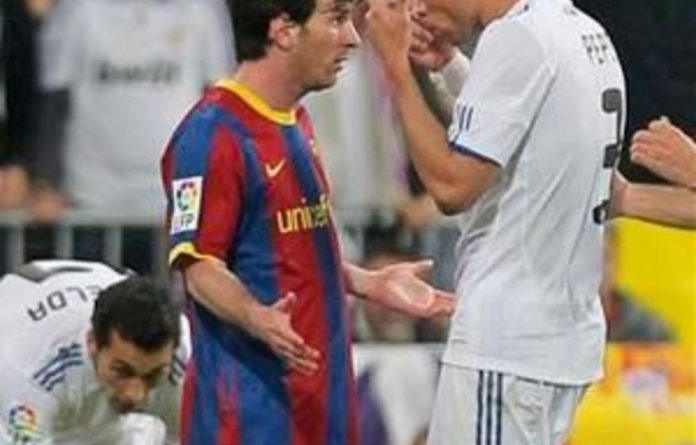 Real Madrid can end its three-year silverware drought on Wednesday by beating Barcelona in the Copa del Rey final — the second of four meetings between the two sides in 18 days.

The match at the Mestalla Stadium comes only four days after the teams drew 1-1 in the Spanish league, a result that moved Barcelona closer to winning its third straight title.

Jose Mourinho’s defensive tactics in Saturday’s draw have been criticized and even Alfredo Di Stefano — the club’s honourary president — said the Portuguese coach’s team lacked “personality”. The former Madrid great likened the match against Barca to a mouse playing a lion.

“The approach is easy — tomorrow we want to win,” Mourinho said, before responding to Di Stefano’s criticism of his tactics. “Di Stefano is one of the most important people in the history of Real Madrid and I’m a nobody at Real Madrid. So you have to respect what he writes and not say anything.

“But I’m the coach. And it’s the coach that decides.”

Madrid can increase its scoring chances by restoring Mesut Oezil to the starting lineup after the Germany playmaker came on as a late substitute Saturday to create Madrid’s best efforts.

“We have talked about the possible ways [Madrid] can play, but I don’t care if they play with three defensive midfielders or with or without Oezil. We will see five minutes into the game,” Barcelona coach Pep Guardiola said. “We have to think about what we can do better. They are very good. We have to look at what we can improve so we can generate more scoring chances.”

But Mourinho — who arrived on the heels of a treble-winning season at Inter Milan — has never succumbed to pressure and is unlikely to do so now.

“In that situation [the answer] is to move the ball and execute more quickly, so that the defenders arrive late,” Guardiola said.

Mourinho has already won two Copa del Reys — during his time as an assistant at Barcelona — since Madrid’s last domestic cup win in 1993. The Spanish giant is playing its first final since 2004 and will be without suspended defender Raul Albiol.

Barcelona, meanwhile, will be looking to add to its record tally of 25 cups from 34 finals as it returns to the site of its last win — a 4-1 victory over Athletic Bilbao in 2009.

Barcelona defender Carles Puyol returned from a near three-month injury layoff to play Saturday and is expected to be available again. Backup goalkeeper Jose Manuel Pinto has played all cup matches this season and will start as he did in the 2009 final, which marked the first of eight trophies won by the club under Guardiola.

The differences between Mourinho and Guardiola will be on display in the final as the Catalans rely on relentless pressure and a possession-based attacking game while Madrid will look to capitalise on counterattacks. A record 143 countries will broadcast the game.

Messi scored his first goal against a Mourinho-coached team to move to within one of becoming the first Spanish league player to reach the half century mark in a season. The Argentina international will be looking for support from fellow forwards David Villa and Pedro Rodriguez, a tandem that has failed to score in the last 10 games, stretching to late February.

Madrid forward Cristiano Ronaldo reached 40 goals for the season on Saturday with his first career strike against Barcelona.

Madrid has won 17 of its 36 final appearances and lost the last meeting between the pair — in 1990 — at Mestalla, which was also the site of their first encounter in 1936. Madrid won that match, one month before the outbreak of the Spanish civil war. — Sapa-AP