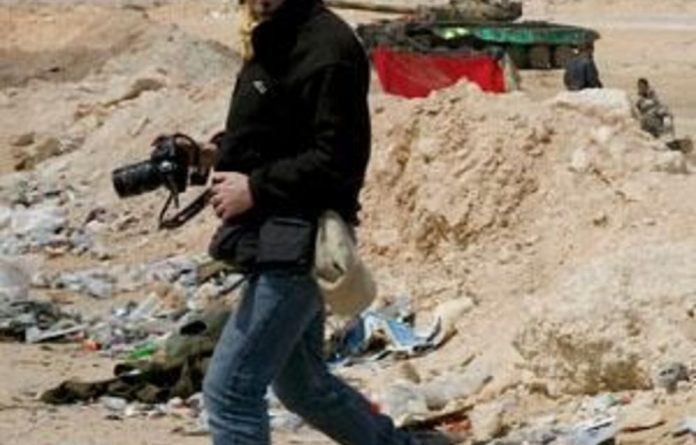 Friends, former colleagues and media activists rallied on Wednesday to to demand the release of Anton Hammerl, the award-winning South African photographer believed to be held by pro-Gaddafi forces in Libya.

Supporters gathered in Cape Town to urge the South African government to put pressure on Libya’s leadership, which has thus far offered no word of assurance nor allowed Hammerl to make contact with his family to assure them of his safety.

The former picture editor of the Saturday Star arrived in Libya on March 28 2011 to cover the crisis. He was last seen on April 5 near Brega and it is believed he is being held hostage by pro-Muammar Gaddafi forces, along with four other journalists.

Memorandum
A small group of journalists demonstrated outside Parliament in Cape Town on Wednesday, calling for the South African government to do more in its search for Hammerl. A memorandum of demands was handed to a representative of the Department of International Relations and Cooperation.

It calls for an assurance from government that they are doing all they can to get him home safely. In addition it urged the government to take a greater stand with regard to journalists who are being held against their will around the world.

A demonstration in Johannesburg is scheduled for Thursday April 21 between 12 and 2pm outside Hyde Park Corner.

Lloyd Coutts, Hammerl’s friend and former news editor during his years at the Sunday Independent said Hammerl would have been fully aware of the risks he faced going to Libya.

“As journalists we take a chance every time we go out into the field. We do it because someone has to, but we know we can never really protect ourselves fully”, said Coutts on Wednesday. “I hope he’s safe. We need good journos like him around.”

Hammerl’s family and friends have said they feel that Anton’s case has fallen through the cracks, saying that the South African government needs to engage with this matter in a meaningful way, with a sense of urgency.

Presidential appeal
A colleague of Hammerl from his days at the Star, Anso Thom, was one of the organisers behind the protest in Cape Town. She explained that fellow demonstrators were disappointed that, despite visiting Libyan leader Muammar Gaddafi in Tripoli and having communicated with him over the phone, South Africa’s President Jacob Zuma had not broached the subject of Hammerl’s release. The department of international relations confirmed that Zuma had not brought up the issue with him.

“We’re not doing this just for Anton [as a friend], we’re doing this because he’s a fellow journo and we feel it’s the right thing to do — it’s part of a wider call for greater action towards freeing captured journalists around the world,” said Thom.

The Presidency issued a statement in response to the memorandum on Wednesday, saying, “President Zuma has instructed the Department of International Relations and Cooperation to use the necessary diplomatic channels to obtain information regarding his whereabouts”. It also confirmed that the South African Mission in Tripoli had now partially reopened and was doing “everything possible” to locate Hammerl.

In response to the government’s reply to the memorandum, Hammerl’s friend and fellow photographer Christine Nesbitt Hills said: “While it pleases me that there is now a government response to Anton’s disappearance, I think it’s important to keep the issue of missing journalists in Libya top of the agenda. Political pressure is one of the few things that can effect change for Anton and journalists like him, detained or missing in Libya”.

Peta Krost Maunder, who worked with Hammerl’s at the Saturday Star and Sunday Independent, said: “What has amazed me about all of this is how journalists around the world have come together to rally for Anton’s release. I think it’s a reflection of what an outstanding journalist he is, and beyond that, his caring character which has endeared him to colleagues worldwide”.

For more information on the situation, and to add your voice to the cause, join the campaign’s Facebook group.

Remembering Anton Hammerl and those he left behind