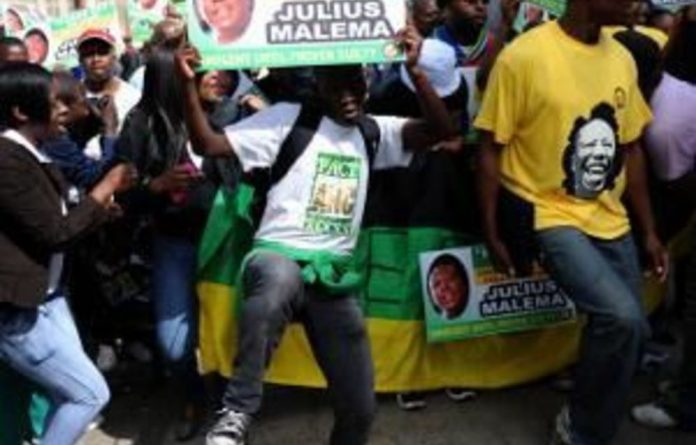 African National Congress Youth League (ANCYL) president Julius Malema told the Equality Court in Johannesburg on Wednesday that Afrikaans interest group AfriForum brought a hate speech case against him only because it wanted the “limelight”.

Under cross-examination by counsel for AfriForum Martin Brassey, Malema said the trial was just “cheap politicking” and that AfriForum “came here to boast”.

“You [AfriForum] came here for cameras,” he told Brassey.

AfriForum has taken Malema to court, contending that his singing of a struggle song containing the lyrics “dubul’ ibhunu”, or “shoot the boer”, constitutes hate speech.

Supporters from as far as Limpopo picketed outside the South Gauteng High Court in support of Julius Malema during his battle with AfriForum for the right to sing the struggle song Dubul ‘ibhunu, translated as “Shoot the Boer”. A confident Malema riled up his supporters after his third day in court, chanting the controversial lyrics.

Media under fire
Malema also continued to lay blame on the media for distorting what he “is saying” and for “misleading AfriForum”.

The freedom of press, fought for in the struggle, was now being abused, he said.

There were also elements within the media wanting to perpetuate apartheid, he said.

“Is it safe to say that there is a conspiracy by the media to perpetuate apartheid?” Brassey asked.

“I don’t know if you would use the word ‘conspiracy’,” Malema said.

“It has become so difficult that we are unable to communicate within ourselves,” he said.

He said there were “no special rules for Julius Malema” and that for him, as an individual, it would be unfortunate if he was stopped from singing revolutionary songs.

“It’s not Julius’s song, I’m not Brenda Fassie,” he told the court.

“If Julius sings revolutionary songs, it’s a headline, but when they sing Die Stem, it’s not a headline,” he said.

“I want to sing with my people. I want to celebrate and commemorate without any restrictions.”

Non-racialism
Malema earlier encouraged AfriForum, which he accused of “calling for his isolation”, to join in the singing of the song, and asked them not to take it out of context.

He also denied being a racist, and said he belonged to an organisation that subscribed to non-racialism.

The word “ibhunu” referred to the oppressors and nothing else, he said.

After recounting a number of political stories during his testimony — such as marching through “white suburbs with a 9mm pistol” after the assassination of South African Communist Party leader Chris Hani by right-wingers — Malema was warned by Judge Collin Lamont.

“You are not entitled to come and make a political speech,” Lamont told him. However, immediately before cross-examination, Malema told AfriForum counsel Brassey: “You brought this political matter to court, I will answer in a political way.”

In previous testimony, ANC secretary general Gwede Mantashe told the court that the ANC was not protecting Malema.

Mantashe also told the court that although Malema was the president of the ANC Youth League, he was disciplined when needed.

“Everybody in the ANC gets disciplined … if you step out of line,” he said in response to questions by Roelof du Plessis, who is counsel for the farmers’ organisation TAU-SA. — Sapa