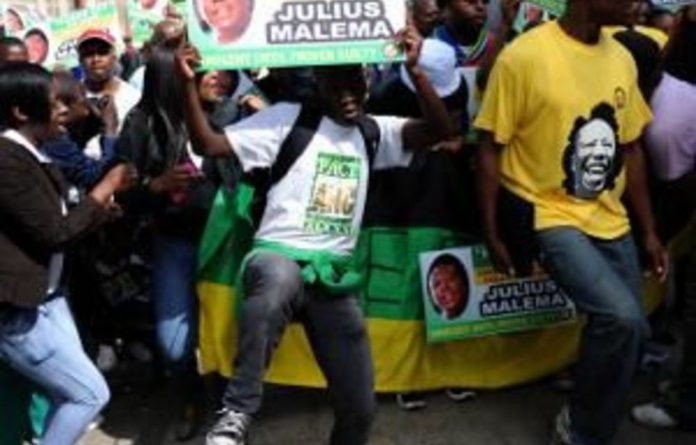 Ever since AfriForum laid charges of hate speech against Julius Malema for singing “dubul’ ibhunu“, or “shoot the boer” — lyrics from the struggle song Ayesaba Amagwala — South Africans from across the political spectrum have been rubbing their hands together in glee at the prospect of a showdown between JuJu and the Boers.

Supporters from as far as Limpopo picketed outside the South Gauteng High Court in support of Julius Malema during his battle with AfriForum for the right to sing the struggle song Dubul’ibhunu, translated as “Shoot the Boer”. A confident Malema riled up his supporters after his third day in court, chanting the controversial lyrics.

Who would prevail? The populist youth league leader with a penchant for putting his foot in his mouth or the indignant Afrikaaner coalition representing a minority group which has faded into political obscurity since the end of apartheid?

The charge of hate speech was brought against Malema last year, after he persisted in singing the song at various events despite a high court interdict that called on him to refrain from doing so. The trial, now in its second week, is being heard by the Equality Court and is being broadcast live on television each day.

Last week AfriForum and the Transvaal Agricultural Union of South Africa (Tau-SA) brought witnesses to testify about the origins of the Afrikaner community, the significance of struggle songs during apartheid, and the increase in farm murders over the years, the ANC, which has supported Malema in the case, hit back with party heavyweights including ANC secretary-general Gwede Mantashe, poet Wally Serote, Minister in the Presidency Collins Chabane, and Malema himself.

Identity issues
South Africans have been watching with interest as witnesses dissect complex issues of identity that are not often openly debated in society — what it means to be a boer, whether the song can be linked to the fear of persecution felt in certain communities, what the role of struggle songs is in post-apartheid society, and who today could be construed as the oppressor. Though the witnesses called to testify on Malema’s behalf have been more convincing than those called for the prosecution, it’s hard to say which way the case will go.

With ANC leaders due to testify this week the youth league set up a big-screen television outside the court so that supporters could follow the proceedings. It’s a move reminiscent of the 2010 Fifa World Cup, when public viewing screens were set up in communities to allow those who could not get into matches to take part in the fun.

The protestations of Roelof du Plessis, SC, acting for Tau-SA, that he did not feel safe coming to court after the screen was erected, has not won him any sympathy or support.

With public opinion leaning towards Malema’s side of the argument, Du Plessis has become increasingly agitated. After a round of laughter from the public gallery in court this morning, Du Plessis protested to the judge, saying “My lord this is not a circus, and this is not a show. This is a court case!” On that count however, he is only half right.

This is no run of the mill court case. Judge Colin Lamont is responsible for deciding a weighty issue — where does freedom of expression end and hate speech begin? Will the court decide to rein Malema in and ban him from singing the song in public, though this may infringe on his constitutional right to free speech? Or would it rule in his favour, despite the very real offence caused to certain segments of the Afrikaner community who feel threatened by Malema’s power to whip a crowd into a frenzy and his use of a song that, at least literally, calls for an attack on their number.

The show must go on
In the days since the case began, these serious legal considerations have taken a back seat to something much larger — showmanship. It started on the very first day, when Malema — dressed in a sharp suit and with Winnie Mandela on one arm — made his appearance at the South Gauteng High Court surrounded by a posse of bodyguards dressed in coordinated black and red suit combos, carrying assault rifles.

This was the first clue that what South Africans were in for was something more than a dry, long-running court case. It became clear that the ANC Youth League did not intend to get bogged down in the legalities of the case, which would have had little appeal to the crowds that have gathered outside of the court, some of whom had been bussed in from Malema’s stronghold in Limpopo. No, this was to be an epic drama, a daytime soapie featuring JuJu and the Boers. The fact that the case was to be televised live on e.tv has only enhanced the sense of television drama.

Matters inside the courtroom have not always been civil, with lawyers on both sides adopting pedantic and hectoring approaches to their witnesses. Judge Lamont has grown increasingly impatient with counsel and has at times taken it upon himself to rephrase and condense lines of questioning for witnesses.

He hasn’t shied away from reining in witnesses either. While on the stand on Wednesday, Malema told a story about marching through white suburbs with a pistol after the assassination of Chris Hani, earning him an admonishment from Lamont not to make a political speech.

With pointed comments from counsel flying thick and fast, the occasional grumbling and frequent laughter from a public gallery acting as a live studio audience has led Lamont to call for restraint repeatedly. Judge Judy would be proud.

At the end of the day
Outside the court, grim weather and the occasional shower have left supporters huddled under an overhang across the road. But when Malema appears at the end of each day, the crowd — bearing the yellow and green of the ANC — gathers to meet him. With large speakers set up on either side of a makeshift stage, Malema uses the opportunity to give speeches and to lead the crowd in rousing renditions of struggle songs that filter into the courtroom.

Last week he disingenuously altered the lyrics “Dubul’ ibhunu” to chant “Shoot to kill, kiss the boer”, before raising his hand in the shape of a gun and making shooting noises, a move that further angered AfriForum (Watch the video).

If this were a popularity contest, Malema would win hands down. AfriForum and Tau-SA, self-appointed representatives of a community that is by no means homogenous in its affiliations or opinions, appear to be fighting a losing battle. Lost in all the drama, however, is the letter of the law, and on that score only Lamont can decide.