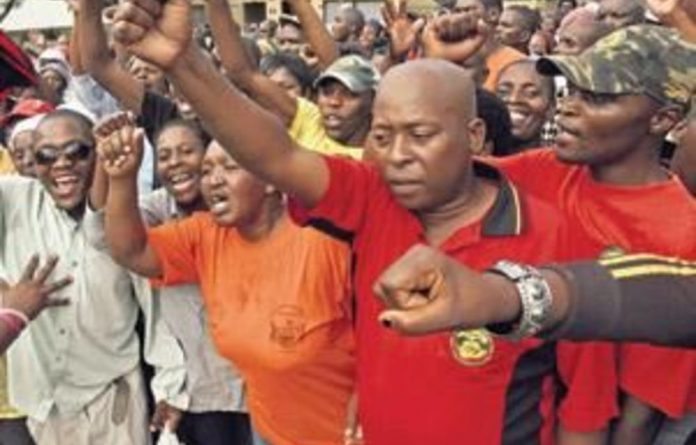 There is increasing anxiety and anger among top ANC leaders over the party’s faltering municipal election campaign.

Six senior provincial and national officials told the Mail & Guardian the campaign was being hobbled by infighting ahead of the party’s 2012 elective conference, sidelining a top election strategist, Fikile Mbalula. The poor performance of local government minister Sicelo Shiceka and depleted coffers were also cited.

The leaders pointed to the poor visibility of the ANC’s election campaign in its own constituencies. The Democratic Alliance’s posters, in particular, were more dominant than the ANC’s in these areas and the opposition party was beginning to make significant inroads there, they said.

Mbalula, the minister of sports and recreation, was a key driver of the 2009 national election campaign. But the ANC’s top six officials excluded him from this year’s campaign, apparently afraid that he might gain an unfair advantage in his campaign to become ANC secretary general next year.

The party’s election posters had gone up too late and the campaign was being clouded by disagreements about nominated candidates, some leaders said. But ANC spokesperson Brian Sokutu said the party’s campaign was still unfolding. “As part of our strategy, we started with billboards because they are more visible [and complement] our focus [to sell] the ANC brand, with the face being that of President Jacob Zuma.”

The idea was to encourage a focus on the party rather than individuals, he said. “We would rather have the face of the president [than individual faces all over].

“Posters with different pictures of individual candidates in different locations will form part of our second phase of the campaign,” said Sokutu. However, the strategy of using national party leaders to spearhead the election campaign was likely to fail, a senior ANC provincial leader said. “Even if a national leader can scream his lungs out, it will not work. This is more about local dynamics.”

Changes
The leader said some candidates were unpopular and communities did not want them. Provincial leaders changed some of the candidate lists in what the ANC said were moves to balance gender and demographic representation.

Corruption was the main complaint the party heard from voters, said Sandi Sijake, president of the ANC’s Veterans’ League. “The problem is with ourselves in the ANC,” Sijake said. During the provincial ANC elections “you heard the names of [ANC Western Cape chairman] Marius Fransman or [former chairperson] Mcebisi Skwatsha” and “the name of the ANC was nowhere”.

Recent troubles with election lists were also a source of difficulty. “Now there is also much unhappiness about candidates and we have to ask people to forget about that and focus on elections. It is not easy,” Sijake said.

Mbalula received accolades for running the ANC’s successful campaign in 2009 when it was under threat from the then fledgling breakaway party, Congress of the People. The ANC Youth League is backing Mbalula to challenge Gwede Mantashe for the position of secretary general of the ANC in 2012.

An ANC insider close to Mbalula told the M&G this week that Duarte, who is now the ANC’s national elections coordinator, decided to switch from the “razzmatazz” election campaign Mbalula spearheaded.

“Her reasoning for this was that the party needed to cut costs,” the insider said. “But the reality of the matter is that people do not want Mbalula to be actively involved in the ANC election campaign because he is a threat to their political career. “If this campaign was being driven by Mbalula, we would be far by now.”

Mantashe told the M&G that Mbalula was not head of elections in 2009 but of organising and campaigning, which is what he still was. “Jessie is coordinating the elections now,” Mantashe said.

Duarte said:” I am not the head of elections. It is advocate Ramatlhodi. The campaign we are conducting was presented to the NEC and supported by it.” Internal party disputes were not the only problem — a poor marketing strategy was also to blame, said one provincial leader.

The ANC poster that carried a message without any picture was “boring” and “not appealing”, the leader said. The lettering was “congested” and the message too long.

“The old posters were written in bold letters and the message was simple and straight to the point,” the leader said. But provincial leaders did not have a say in the design of election posters, the leader said. “We just collect them and hang them on to poles.”

Finances also accounted for differences between this year’s election campaign and that in 2009. In 2009 people were willing to sponsor the ANC’s campaign, but the party’s purse was half full this year.

An ANC strategist referred to the failure of Shiceka’s turnaround strategy — it had raised unrealistic expectations but delivered nothing. The strategy was supposed to revitalise weak municipalities in the North West and Eastern Cape from 2010 but nothing had happened.

“The success in revitalising those municipalities was supposed to be what the ANC would sell to the electorate in these elections. But while the vision was there, there was no detail on how it would be implemented.”

Other ANC activists have also questioned whether it was strategic for Zuma to declare 2011 the year of job creation instead of the year of service delivery because the elections were being fought over billing, refuse collection, potholes, water and sanitation, electricity and other aspects of local service delivery.

Bloopers: Let us count the ways

There’s a backlog of by-elections to get through before next year’s local government elections. Will voters go to the polls even though Covid protocols are in place?
Read more
Opinion

More than 11 800MW of new electricity capacity from independent power producers will come online in 2022, giving Eskom space to do more maintenance on its unreliable infrastructure
Read more
Environment

Board members have quit the gas company, accusing the Central Energy Fund of poor governance, and the energy minister of overreach
Read more
Advertising