Jesus Christ lived in the townships 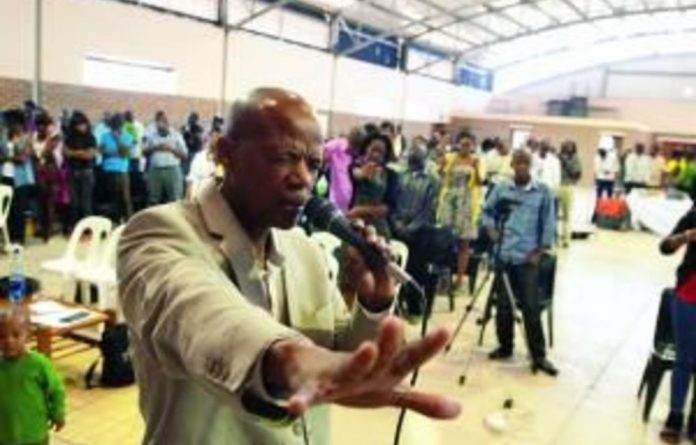 When Cape Town clergyman Xola Skosana made the declaration last year that “Jesus Christ was HIV positive”, some within South Africa’s Christian community bristled with rage. That such a mildly radical proposition was marked by controversy and uproar is a measure of the state of today’s church. After all, what Skosana said was not in breach of basic church doctrine.

One needs to remember that when Jesus went about Galilee and the surrounding areas he routinely said revolutionary stuff. Some of his most enduring sermons — the story about the Good Samaritan, or how he was the son of God, for instance — were so radical that he risked being stoned.

But the church, like football and politics, has not been exempt from the vicissitudes that come with commerce.

Gestures and gimmicks have replaced commitment and social engagement and truth has given way to motivational rhetoric. The consequence, the cynical among us would say, is that church services are anodyne, feel-good sessions to raise funds to buy the pastor his latest Merc.

What seems to have been forgotten is the fact that true religion is not about how large a tithe or how many millions one can transfer into the church’s bank accounts.

Perhaps anticipating the contemporary centrality of offering and tithes, Amos, one of the most socially conscious of the Israelite prophets, declared to his compatriots that God did not care for their sacrifices. “Did you bring me sacrifices and offerings [in the] 40 years [you were] in the desert … ?”

He exhorted them instead to “let justice roll on like a river, righteousness like a never-failing stream”.

‘God has chosen black people!’
Liberation theologians are heirs to Amos and other prophets who inveighed against social injustices.

The brazen nature of Skosana’s statement brings to mind other clergyman, working in similarly difficult circumstances, who were forced to challenge their contemporaries. If Skosana has infected Jesus with the virus, there is another preacher who has said something similarly radical.

Actively contradicting racist scholars who portrayed black people as cursed and God as white, Cone argued for “a theology whose sole purpose is to emancipate the gospel from its ‘whiteness'”.

But to confound the race commissariat, whiteness and blackness had nothing to do with pigmentation. “To be black means that your heart, your soul, your mind and your body are where the dispossessed are.”

Months after the furore I ask Skosana on the phone what was on his mind when he delivered that sermon. Skosana, pastor of the Way of Life church in Khayelitsha, Cape Town, described the sermon as “a simple exposition” and said he was disappointed by the reaction.

“One would have thought the Christian community would have embraced the message. When I look back now, I have no regrets that I presented the gospel in the way I did.”

‘The mind struggles’
Skosana did not mention names but he is obviously referring to people like fellow Cape Town clergyman Mike Bele, who was clearly affronted by Skosana’s take on the gospel.

“I believe no anointed leader with a sound mind about the scriptures and the role of Christ in our lives would deliberately drag the name of Christ to the ground,” Bele said at the time.

“It’s understandable,” Skosana said about the outrage that greeted his statements. “It’s the scourge of our times. HIV/Aids has ravaged our times and we live in constant fear. Aids has been a demon and to put such an ugly disease in the same sentence with Jesus — the mind struggles with that.”

Two of his sisters died of Aids, which means the scourge has personally affected the 44-year-old pastor who studied at Cape Town’s Cornerstone Christian College and later did his honours in theology at the University of the Western Cape.

“Most people responded out of fear and not after theological reflection. There was an overemphasis on how the disease is contracted. Yet we know of many young girls who are raped by older men. Even if one got infected in a moment of weakness, or one made the error of not using a condom, our role is to love. Nobody is out of reach of God’s mercy.”

His other campaign, which might not raise a storm in the way his Aids statement did, could be expansively subtitled: “Jesus lived in the townships.”

He said the idea “came to me in a vision, an out-of-body experience”.

‘Welcome to hell’
Talking to Skosana teaches one to make quick mind acrobatics from the quotidian to the eschatological. In fact, he issued a warning: “My language switches from the Pentecostal liberal theology to black theology.”

He explained: “I saw myself standing by a highway with a big banner that said ‘Welcome to hell: South African townships’.”

This is Skosana’s way of drawing attention to the squalor of informal settlements and townships, which he described as “glorified refugee camps, rat-infested hell holes”.

“Let it be known across the breadth and length of this country that the continuation of separate development and integration, based on affordability, is the perpetuation of the notorious Group Areas Act of yesteryear,” a press statement wailed in prophetic accents.

To raise awareness of the campaign he will march on April 23 from Khayelitsha Stadium to the N2. This is a continuation of the march on which he first embarked on Christmas Day last year.

“This is a call for the government to eradicate the South African townships, especially the shacks,” he said. “This is an emergency that requires the whole country to focus its energies on. We have to re-imagine a new model of settlement. Human settlements should be about more than a roof above your head. It should be a place to flourish. A house isn’t a house unless it’s complemented by an enabling environment.”

If one hears him talk like this, one could think that he wants to make a beeline into politics.

“I’m not a politician but a preacher of the gospel whose eyes have been trained to look at the scripture contextually. It’s about reading the gospel in a manner that speaks to the [people’s] material conditions.”

‘Bruised and naked body of a stranger’
I have also read Interpreting Easter, his carefully argued paper that contrasts the meaning of the two most important Christian holidays: Easter, commemorating Christ’s death, and Christmas, commemorating his birth.

Christmas, Skosana argued, is a favourite holiday among “white Christians”; Easter, on the other hand, means more to the working class and the downtrodden.

“They have an immediate identification with a bruised and naked body of a stranger hanging on the cross. That stranger has become their symbol of suffering and hope, a depiction of their daily struggle. When they look up at the cross, they look at themselves.”

The black preacher, Skosana argued, “must exhume the black body of Jesus from the grave”.
“The black preacher must point to the cross and remind black people that their cross on the ballot paper on May 18 2011 should not be to legitimise and perpetuate the corruption and political hegemony that keep black people in servitude and in modernised slavery.”

But today’s black preacher is incapable of that, Skosana believes.

He lacks the necessary tools, skills and the gift to place scripture in its context. The black preacher is unwilling to submit “to the discipline of study” and is given to the “gimmicks” first sold to him by “the American TV evangelist”.

It is quite likely that Skosana could be an exception.

Percy Zvomuya is the deputy arts editor of the Mail & Guardian.