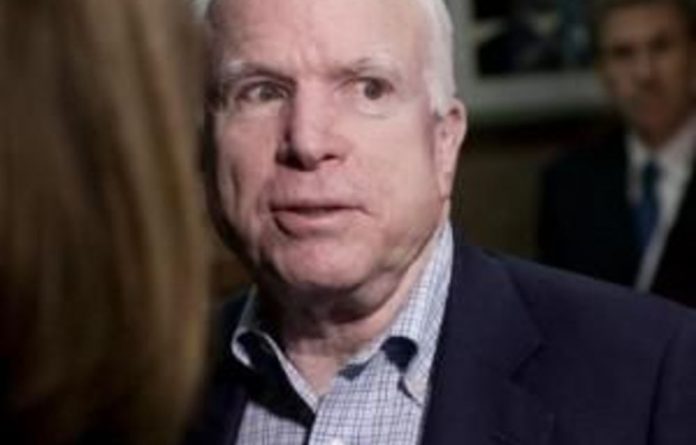 Insurgents bogged down in their bid to oust Muammar Gaddafi on Friday hailed a United States decision to deploy armed drones over Libya, as Senator John McCain held talks with the rebel leadership in Benghazi.

“We are so pleased,” said Mustafa Gheriani, the media liaison official for the rebels’ Transitional National Council (TNC), in the rebels’ eastern stronghold of Benghazi.

“We hope that this can bring some relief to the people in Misrata,” he added, referring to the rebel-held city in western Libya which has been pounded by strongman Kadhafi’s forces for more than six weeks, leaving hundreds dead.

US President Barack Obama authorised deployment of missile-carrying drone warplanes over Libya “because of the humanitarian situation”, US Defence Secretary Robert Gates said on Thursday.

Libyan rebels, who on Thursday overran a post on the Tunisian border to mark their first advance in weeks against Kadhafi’s forces, have complained that civilians were being killed in places like Misrata.

“Our houses are being hit by bombs and rockets,” said 45-year-old Ibrahim Issa Abu Hajjar, who fled Misrata with hundreds of civilians aboard a Turkish ferry that docked in Benghazi, the rebels’ eastern stronghold.

“We want the allies to stop Kadhafi’s forces from taking the city.”

Drone advantange
Unmanned drones will give North Atlantic Treaty Organisation (Nato) commanders precision capabilities to strike targets that are “nestling up against crowded areas” in the region, said US General James Cartwright, vice chairperson of the Joint Chiefs of Staff.

“Now you have the intermixing of the lines, so it’s very difficult to pick friend from foe,” Cartwright said. “A vehicle like the Predator (drone) that can get down lower [and identify targets] helps us.”

Their first deployment was slated for Thursday but it was called off because of bad weather.

Libyans should decide their future, not foreign powers who initiate air strikes and send money to the rebels, he said.

He was mobbed when he paid a visit to the rebels’ headquarters in the centre of the city by a crowd of about 50 people, who chanted, “Libya free, Gaddafi go away — thank you America, thank you Obama.”

They also chanted, “The nasty Gaddafi has left and McCain came.”

McCain, the highest-ranking US politician to visit Libya’s rebel-held east since a popular uprising against Kadhafi’s rule began in mid-February, was expected to hold talks with TNC leaders later in the day.

Rebels have been pinned back by government troops for more than three weeks in eastern Libya and suffered heavy losses in Misrata.

Rebel leaders in the city have pleaded for foreign help, saying the air strikes are not enough to dislodge Gaddafi troops hiding in civilian areas and fighting street by street.

Foreign assistance
France, Italy and Britain have said they would send military personnel to eastern Libya, but only to advise the rebels on technical, logistical and organisational matters and not to engage in combat.

The TNC has stressed that the rebels don’t want foreign troops fighting alongside them.

“We only accept military help to create safe passages to deliver humanitarian aid and save civilian lives,” a TNC spokesperson told reporters.

Around 30 people — journalists, diplomats, aid agency representatives and rebels — gathered at the Tibesti Hotel with candles in hand soon after their bodies arrived on a ferry in the eastern port city.

The two were killed by a mortar strike as they were covering vicious combat in Misrata’s shattered central district, along the main Tripoli Street.

South African photojournalist Anton Hammerl is still missing in Libya, and is believed to be in the custody of pro-Gaddafi forces.

The battle lines have been more or less static in recent weeks, however, as Nato air strikes have helped block Gaddafo’s eastward advance but failed to give the poorly organised and lightly-armed rebels a decisive victory.

Gambia, meanwhile, said Friday it was recognising the TNC as the only legitimate body representing Libyan interests, and expelling Tripoli’s diplomats.

The west African state became the fourth country after France, Italy and Qatar to recognise the TNC. — AFP