‘Up to 40% of Gaddafi’s forces destroyed’ 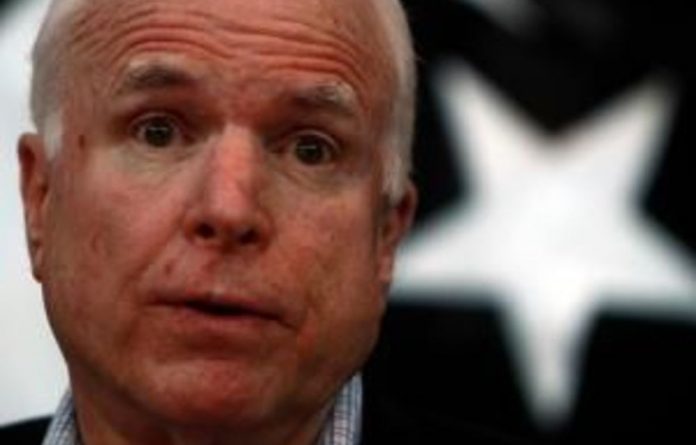 The United States military’s top officer said more than a third of Libya’s forces have been destroyed, as Senator John McCain, on a visit to rebel-controlled Benghazi in Libya, called on the international community to arm and recognise the rebel Transitional National Council as the “legitimate voice” of Libya’s people.

“The Libyan main forces have been attrited to about that level, between 30 and 40%,” Admiral Michael Mullen, chairman of the Joint Chiefs of Staff, said at a news conference at the US military’s Victory Base Camp on Baghdad’s outskirts.

“Essentially it is very much stalemate-like in the vicinity of Ajdabiya and Brega … I am sure that Nato forces will continue to attrite the military capability of the regime forces,” he added.

Mullen’s comments come as rebels fighting to topple Libyan strongman Muammar Gaddafi have been held back by his forces for more than three weeks in eastern Libya.

“I think clearly the long-term goal is to see Gaddafi and his family out of power and out of the country,” Mullen said.

He later added: “The exact outcome of when something is going to happen is very difficult to predict. But I think the eventual outcome is certain.”

Asked about the possibility of arms for rebel forces fighting Gaddafi’s soldiers, Mullen said that was “not going to happen”.

But that is exactly what Senator John McCain urged his own country and the international community after meeting the rebel leaders at their stronghold in Benghazi on Friday.

“I would encourage every nation, especially the United States, to recognise the Transitional National Council as the legitimate voice of the Libyan people. They have earned this right,” McCain said at a news conference in Benghazi.

The Mediterranean city of Benghazi, run by the TNC, was “a powerful and hopeful example of what a free Libya could be,” the senator said.

“I met with all the key leaders of the council and applaud their remarkable progress in their struggle for liberation,” he said, adding that “Benghazi today is a source of hope.”

McCain dismissed fears that Islamists had infiltrated Libya’s parallel government in the east — recognised so far by France, Italy and Qatar — or rebel troops on the front.

“I have met these great fighters and they are not Al-Qaeda. To the contrary, they are Libyan patriots who want to liberate their nation. We should help them do it,” he said.

McCain also called for the arming of rebels fighting Muammar Gaddafi forces, saying that capable countries should assist them with more weapons and training to help them oust the Libyan strongman, who had “forfeited” his right to rule by committing “atrocities” against civilians.

“Responsible nations need to provide the military forces of the TNC with every possible means of assistance to enable them to create conditions on the ground that increase pressure on Kadhafi to leave power,” he said.

McCain said he favoured financing the rebels through Gaddafi regime funds that have been frozen abroad, an idea gaining currency among world leaders and openly discussed by French diplomats on Friday.